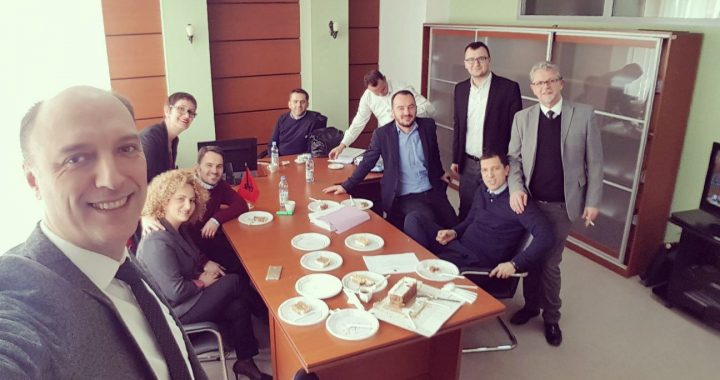 MPs welcome Frasher Krasniqi back from detention. The group, formerly part of Vetevendosje, has filed a request to register as an independent group. | Photo: Facebook.

A group of Vetevendosje MPs, some of whom recently resigned from party leadership positions due to ‘ideological differences,’ filed a request to form a new parliamentary group.

Led by Dardan Sejdiu, 12 MPs will be officially leaving Vetevendosje, which was the largest single party in parliament. The MPs filed a request with the Kosovo Assembly to form a new parliamentary group titled “The Group of Independent Deputies,” the Kosovo Assembly press office announced.

Dardan Sejdiu, former deputy mayor of Prishtina, will be the parliamentary group’s representative.

Vetevendosje, which ran without a coalition in the June 2017 snap elections, was represented by 32 MPs in parliament.

The split of its MPs comes after a months-long crisis within the party that became apparent to the general public in December last year when a message by MP Derguti calling the party’s current leader Albin Kurti a “shit” was leaked to the media.

Since then, multiple MPs and high figures within the party have resigned from leadership posts, citing “ideological differences” and objecting to Kurti’s election as party leader. Earlier on Wednesday, MP Donika Kadaj-Bujupi left Vetevendosje and rejoined her former party, Ramush Haradinaj’s Alliance for the Future of Kosovo, AAK. Prishtina Mayor Shpend Ahmeti also recently quit the party, saying “disagreements harmed the spirit and faith” in the movement.

Correction: An earlier version of this article said that Vetevendosje previously had 31 MPs; the correct number is 32.