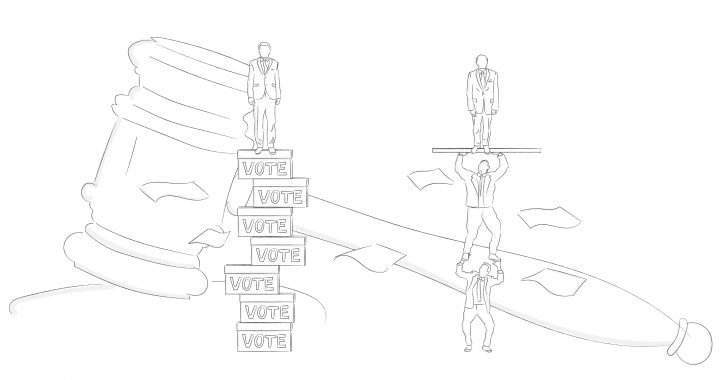 The Constitutional Court is gearing up for a monumental decision over the legality of the president’s attempts to form a government, but its outcome could push Kosovo politics into binary choices and to a potential point of no return.

An unprecedented political and institutional showdown is unfolding in Kosovo while the coronavirus crisis continues, and like any good political thriller in the Balkans, its plot is set to take a number of Machiavellian twists and turns before the year is out.

On one side of the current dispute is the majority of political parties represented in the Kosovo Assembly and President Hashim Thaci, who support a quick re-formation of Kosovo’s institutions following the ousting of the previous government on March 25.

The plan, which was nearing fruition, was for a new government to be mandated without fresh elections and without Vetevendosje, the party that won the most votes at the most recent parliamentary elections on October 6, 2019.

Meanwhile, Vetevendosje have continuously argued that the only constitutional course of action is the dissolution of the Kosovo Assembly followed by holding early elections when conditions allow.

However, as of May 1, 2020, the political battle between these two blocs has been temporarily put on hold by an injunction from the Constitutional Court. The court has suspended all action until it adjudicates whether President Thaci’s decree granting an LDK-led coalition the mandate to form a new government was constitutional.

One critical point for the Court’s consideration is whether the president’s assertion that Vetevendosje has rejected the opportunity to propose its own candidate for prime minister is constitutional or not.

In a letter sent to Vetevendosje leader Albin Kurti on April 22, Thaci stated that he would start talks with other parties due to Kurti’s failure to respond to his request for the party to name a candidate, which was first made on April 2. However, in his reply, Kurti claimed that the party had not rejected the president’s request, and that the president did not have the authority to ascertain that they had.

Whatever the outcome, the Constitutional Court is set to give another momentous ruling comparable to that of 2014. Its decision will also set the agenda of Kosovo’s political wrangling for the foreseeable future, as no verdict can satisfy the hopes and expectations of all the involved parties.

There are two main routes out of the crisis the Constitutional Court ruling can provide: new elections, or a new government, with two potential methods for how this government could be formed.

The first scenario is that the Constitutional Court could support Vetevendosje’s stance, which would pave the way for holding early parliamentary elections sometime later in the year.

This would be the ideal outcome for Vetevendosje, who would not only continue to lead the caretaker government but be set to prepare for an election which they are anticipated to win convincingly. Several opinion polls held recently suggest the party may have doubled in popularity since October’s ballot, and a 2020 parliamentary election may even put the party in a position to form a government without a coalition partner.

Vetevendosje are keen to cash in on this potential surge in support, and are benefitting from attempts to portray the current situation as a result of post-election bargaining that deviated from what was offered to voters at the election.

PDK, meanwhile, seems to be trying to distance itself from the LDK coalition government as a way to curb its decline in support among the electorate. The party has recently called for elections as soon as conditions permit, despite having voiced support for the formation of a new government in a public meeting with President Thaci as recently as April 22.

On the other hand, LDK and its political allies, AAK, Nisma and AKR, seem to be bound together through fear of poor results in an early election. The parties are polling badly, and an election may see LDK and AAK moved to the margins of the political landscape, while NISMA and AKR might lose their parliamentary representation entirely, having barely made the threshold in 2019.

The second scenario is that the Court could reject Vetevendosje’s stance that a successful vote of no confidence against the government automatically leads to an early parliamentary election, providing constitutional endorsement for the creation of a new government without going to the polls.

However, within this scenario the court could also rule that the president’s decree to mandate an LDK candidate for prime minister was unconstitutional, which would effectively put Vetevendosje in the driving seat to form the new government.

With no deadline defined as to when Vetevendosje should submit the name of its candidate to the president, the party could continue to lead a caretaker government until a new coalition presents itself, or move to dissolve the parliament through an Assembly vote, leading to an election.

Finally, the Court could also consider the president’s decree entirely in line with the constitution’s provisions, and the LDK coalition could resume its efforts to vote in the new government through the Kosovo Assembly.

Such a ruling, which would enable the formation of a government without the winning party, would have a long term impact on Kosovo politics, setting a precedent that would not only shape who can form a government, but limit opposition parties’ ability to force new elections through a direct vote.

While future opposition parties may be able to secure the support of an absolute majority for a motion of no confidence, they will in the majority of cases fail to secure the two thirds majority required to dissolve parliament.

In this scenario, a politically aligned president may refuse to dissolve the Kosovo Assembly if he or she favoured the continued rule of the governing parties, allowing a caretaker government an extended mandate even after a vote of no confidence.

In the short term, the LDK coalition would have a very narrow majority of between one and six seats in the parliament. This means that making decisions would likely require the approval of all five members of its coalition: LDK, AAK, NISMA-AKR, Srpska Lista and the MPs representing non-Serb communities – who do not always represent a consolidated political bloc.

These are all political parties with diverging views, and the government’s programme would be unlikely to be based on a comprehensive list of programmatic goals. Its internal cohesion looks weak and its longevity unlikely before it has even been formed. Like the PDK-AAK-NISMA government (2017-2019), the new government will only stay in power for as long as its work does not infringe on the preferences of the coalition parties.

Past practice has shown that coalition governments are usually guided by the whims of leaders of the political parties that make up the coalition, who effectively wield almost as much power as prime ministers. LDK’s coalition agreements with the other parties have already confirmed the authority of political party leaders over the prime minister in appointing and dismissing ministers from their ranks.

All of these potential scenarios result in a win-lose or lose-lose outcomes for Vetevendosje and the LDK coalition, and Kosovo politics will feel the aftershocks long after the Court’s decision is made.

Coalition governments have proven to be incapable of surviving the intended four-year mandate of the Assembly, and have led to unstable governments, frequent elections and political manoeuvres that divert the will of voters expressed through elections.

Many have seen the endless series of coalitions as a means of protecting the interests of the long-serving figures leading the parties that have governed over the last two decades, and voters may aggregate their support behind a single party in an attempt to ensure government stability and immunity from trade-offs between political parties.

As a result, the political scene might evolve into two options vying for absolute support from voters: a battle for dominance between Vetevendosje in one corner and PDK, LDK, and AAK in the other, while smaller parties fight for parliamentary representation.

With no cross-party dialogue on the horizon, now it seems as though we are past the point of no return: one of the two camps must submit or be defeated.

Vetevendosje’s challenge is whether it is able to present its cause as the will of the public rather than a purely partisation one, and its success might depend on the party’s ability to form alliances with other social and political groups that support change. If Vetevendosje can present itself as the platform pushing for a break from state capture, it may yet win an absolute majority.

A binary political choice may provide an opportunity to ensure genuine representation of voters’ choices by the winning party in the government, circumventing any uncertainty for voters as to which parties will take a seat at the table of the executive. But unless there are moves to ensure cross-party dialogue on significant issues, it will undoubtedly further entrench social divides.

A ‘winner-takes-all’ political system in Kosovo can only function democratically if sufficient checks and balances exist that ensure accountability of the government and enable the opposition parties to operate freely to contest the government’s proposals and present alternatives to the public.

This is perhaps most pertinent in reference to the dialogue with Serbia. If an LDK coalition government manages to quickly sign and ratify an agreement involving territorial exchange or partition, it will sow the seeds of the most significant conflict among political parties since the post-war period, and will dominate the public discourse in the years to come.

In such a case, Kosovo will continue to be entangled in ruthless political competition and institutional instability, benefitting a corrupt political elite while the public loses hope in bringing about change.