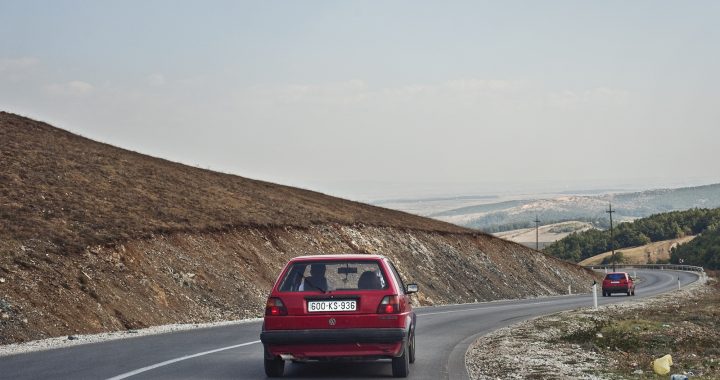 Confirmation that a new motorway will begin construction between Istog and Prizren was announced on Thursday. Kosovo’s primary public investment in the last decade has been in asphalt, but not in the people that use it.

Kosovo’s infrastructure minister Pal Lekaj confirmed in a televised interview on Thursday that a new 91 kilometer highway, named Dukagjini, will begin construction in October this year, connecting the southern city of Prizren with Istog in north-western Kosovo.

Although details of the project will only be revealed in August, and the tendering process will not be completed until October, the minister stated that he already knows the project will cost around 560 million euros – not including the cost of expropriating the land and relocating many homeowners obstructing the proposed route for the highway.

According to Lekaj, 40 per cent of the proposed 91 kilometer highway is currently resting on land that is owned privately, resulting in astronomical additional cost for its construction.

Officials have estimated that this would almost double the final cost of the highway’s construction, reaching around one billion euros. This would mean that Kosovo taxpayers would pay a possible 11 million euros for each kilometer of the motorway. According to a study from the Riinvest Institute, the average cost of building one kilometer of highway is 11.5 million euros. In Germany, the average 8.2 million while in the Balkans, Croatia’s roads cost only 6.7 million euros per kilometer.

The 60 kilometer highway from Prishtina to Skopje that opened in May cost more than 800 million euros, while the contract and complementing documents remained hidden from the public eye.

The American-Turkish consortium, Bechtel-Enka, has already built two highways in Kosovo in the last decade. Were they to build a third, their investments in Kosovo’s asphalt would surpass two billion euros.

While Lekaj refused to confirm or deny that Bechtel-Enka will head the Dukagjini highway’s construction, he spoke highly of the American-Turkish company, praising them for the work they have completed.

So far, Bechtel-Enka has maintained a monopoly on highway construction in Kosovo, something that will be confirmed if this trend continues with the Istog-Prizren road.

Better roads can help economic growth and facilitate travel for people across the Balkans as well as in Kosovo, said Lekaj. “The Dukagjini highway will have an economic impact, the development of tourism and the connection of the region.” Yet, Kosovo’s economy is not based in production and exports, nor is tourism one of the largest economic drivers. As such, the benefits of investing such huge amounts in this project would be minimal, with the largest portion of the economic benefit going to neighbouring countries through the facilitation of the transit of goods.

In April, LDK’s Avdullah Hoti said during an Assembly session that the European Bank for Reconstruction and Development, a potential investor in similar construction projects, condemned the proposal, claiming that constructing the highway between Istog and Prizren would not be economically feasible for Kosovo.

In addition, investments in a third motorway by the government would highlight its neglect towards crucial socially beneficial investments that citizens of Prizren, Istog and the rest of Kosovo need.

According to the 2017 Household Budget Survey conducted by the World Bank and the Kosovo Agency of Statistics, it is estimated that 17.6 per cent of the population in Kosovo live in absolute poverty, living on less than 1.82 euros per day. Over five per cent live in extreme poverty, less than 1.3 euros.

The new highway comes at a time when Kosovo’s unemployment rate has surpassed the 30 per cent. Among youth aged 15 to 24, unemployment levels have reached 50 per cent. The education system faces a drastic shortage in resources, and in the last decade, as a recent BIRN investigation highlighted, one third of libraries in the country have been closed due to lack of funding and the negligence of public institutions to maintain them.

On the other hand, if referred to Kosovo’s 2019 budget, out of the 73 million euros apportioned for the Ministry of Education, Science and Technology, only 27.7 million are in capital investments like infrastructure and direct spending. In 2020 and 2021, no increase in investment is planned for.

At a time when Kosovo’s citizens lack public health insurance and often need to seek more secure healthcare in neighboring countries, there is a striking lack of societal and political opposition to a one billion euro road construction project. This is even more shocking due to the lack of explicit economic benefit that Lekaj was able to prove such a highway would bring.

These are just a few of the hardships Kosovars have faced as a result of improper public spending that have convinced citizens to abandon the country. In the last five years, the number of people leaving Kosovo has exceeded 170,000 citizens, about 10 per cent of the entire population. If we are not openly questioning the economic viability of this controversial project, we need to at least pose this question: What use will this highway have, other than providing people with a smoother journey as they leave?

In the near future, Kosovo citizens will need to pay even more to drive across these highways. Although money is pulled from taxes to fund their construction, the highways will also introduce pay tolls along the route to continue paying off the debt, as warned with the Ibrahim Rugova Highway that connects Kosovo with Albania.

This year, Albania introduced a tariff on the section of the motorway in their territory, a roundtrip to Albania costing 10 euros for cars circulating from Kosovo to Albania.

When Kosovo introduces its tariff too, the less wealthy that rely on this route will be hit the hardest. Kosovo citizens should not be required to pay for investments that benefit a single company that benefits from its close links with Kosovo politicians, who in turn exude careless disregard of the consequences for the people paying for it.

Despite this, criticism should go beyond the ruling government. As more details on the project have been revealed, Kosovo’s political opposition has been silent. If a project with such negative social and economic consequences is not reason enough to call for an extraordinary session at the assembly, then what point is there in having a political opposition?

Does this insufficient response not cement the belief that misuse of public funds or improper allocation of money has become normalized? Perhaps the opposition is afraid of losing votes in the region where the highway will be constructed.

The necessity to oppose the project has nothing to do with the Dukagjini region. Investing in roads is fundamental, of that there is no question. But poor distribution of taxpayers’ money in a region that needs investment – in sectors of the economy other than exports and the transport of products – is worth protesting over.

The debate over spending hundreds of millions on a project which is doomed to bring harm has to start before it becomes too late. Kosovo citizens cannot afford to pay for another extortionate highway that would fill the pockets of a single company and the irresponsible politicians that facilitate it, while the pockets of Kosovo’s taxpayers remain empty.