Raspberry production in Kosovo has soared in recent years, with rural communities across the country establishing small farms for the booming export market.

Not even 100 steps away from his home, a short walk from his garden gate in the village of Dramjak near Ferizaj, Bekim Muhaxheri has set up a small raspberry farm. He tends to it religiously throughout the year in order to harvest and reap the rewards during a short one-month season between mid-June and mid-July.

For five years now, Muhaxheri has turned raspberry cultivation into a second profession, complementing his career as an English teacher. This season, he harvested 2,200 kilograms of raspberries from his ​​65-acre patch of land, earning nearly 4,000 euros.

In fact, Muhaxheri’s second job has become so lucrative that the 49-year-old is considering making it his full time occupation. “If I managed to plant two or three hectares of raspberries, I’d leave my job as a teacher,” he told BIRN. “It is more profitable to work the land.”

Cultivating raspberries has grown enormously as an industry in Kosovo in recent years. In 2019, the Ministry of Agriculture registered over 1,637 hectares of land dedicated to raspberry production, with 7,206 tonnes of the fruit harvested in Kosovo. In 2018 alone, more than 8,500 tonnes of raspberries were cultivated.

These figures represent a roughly 70-fold increase in raspberry production compared to 2013, when just 23 hectares of land were dedicated to growing raspberries, producing 105 tonnes. 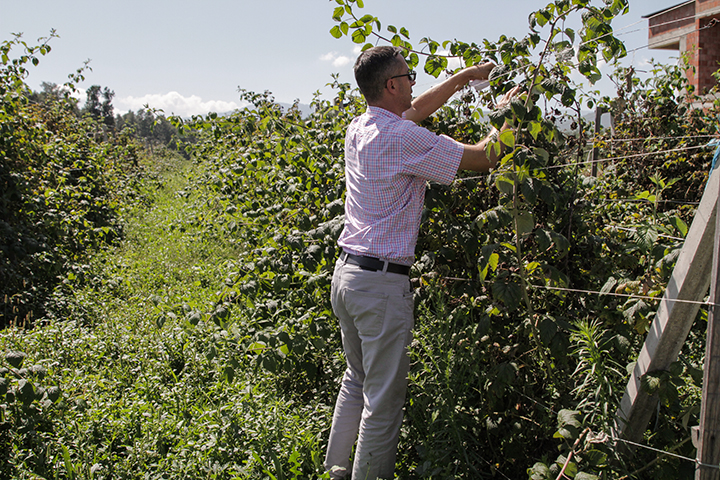 Raspberry farmers in the village of Ballofc, near Podujevo told BIRN that they mainly produce for the export market. Sabit Mulliqi, who has been cultivating a small farm for six years now, said that his raspberries are primarily exported to Germany and Austria.

In Ballofc, the cultivation season lasts longer than in Dramjak, beginning at the end of July and extending until mid-October. The farmers in the village grow the ‘Polka’ raspberry, known as ‘autumn bliss’ due to its late production.

It has been six years since a handful of families in the village turned raspberry cultivation into a family business. According to Bedri Mulliqi, one of the farmers in Ballofc, the harvesting process is not difficult, but care is required to bring the plant to cultivation.

“Raspberries need work before they are harvested,” Mulliqi said. “Once the seedlings are planted we also fertilize them with animal manure and weeds that inhibit growth are regularly removed.”

Mulliqi enjoys his work, as well as the profits. Farmers in the village told BIRN that the produce brought in around 140,000 euros of income to the village during raspberry season last year.

“It is better to cultivate raspberries and work on my land, than to go and work somewhere for a much lower salary,” Mulliqi told BIRN. “We sell a kilogram for 1 euro and 80 cents, but it depends on the raspberry variety and the quality.” 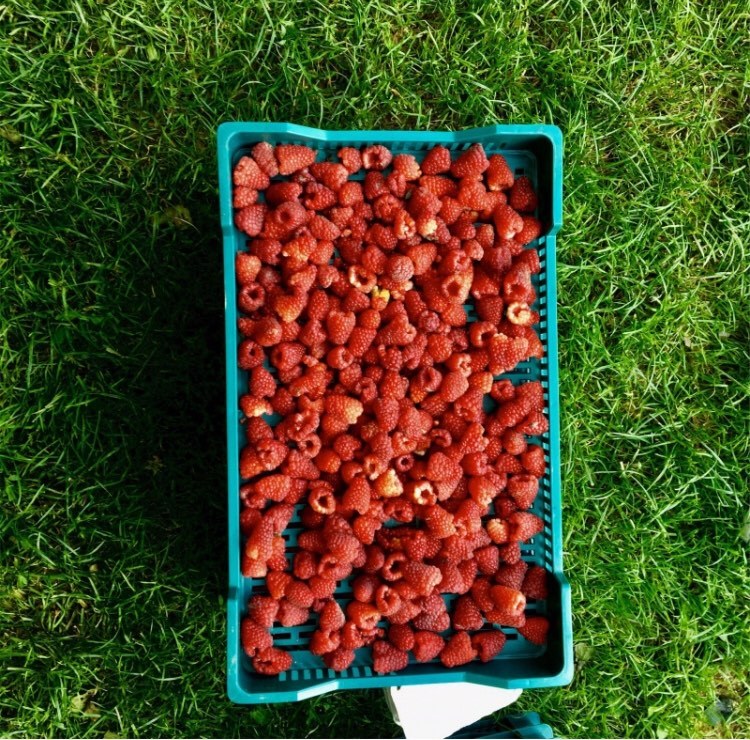 For Muhaxheri in Dramjak, the prices paid for his raspberries are also variable, ranging from 2 euros per kilo, down to 80 cents per kilo. “The price is dictated by the collection point,” he tells BIRN. “Immediately after collecting them we send them to collection points. We do not know the price, they set it for us.”

Muhaxheri told BIRN that he believes that the collection point should set a standard price for the raspberries, and that this should be based around the cost of hiring seasonal workers. The raspberry businesses in Dramjak and Ballofc are both expanding quickly and beginning to provide employment outside of the immediate family.

Burim Shabani from Ballofc said that around 12 to 14 are required to work a plantation with 45 acres, and that the family often take on seasonal workers. On 8 August this year, around 140 workers could be found on the village plantations in Ballofc, harvesting 4,930 kilograms of raspberries in just one day.

Muhaxheri says he has received little support from Kosovo’s institutions through agricultural production subsidies since he began his business by buying raspberry seedlings in Strpce, a largely Serb-populated region which is known for its large production of raspberries.

“I bought these from some Serbs in Strpce all with my own money,” he tells BIRN. “Neither the Municipality nor the Ministry of Agriculture helped me. The Ministry helped me once, last year, with a subsidy of 323 euros.” 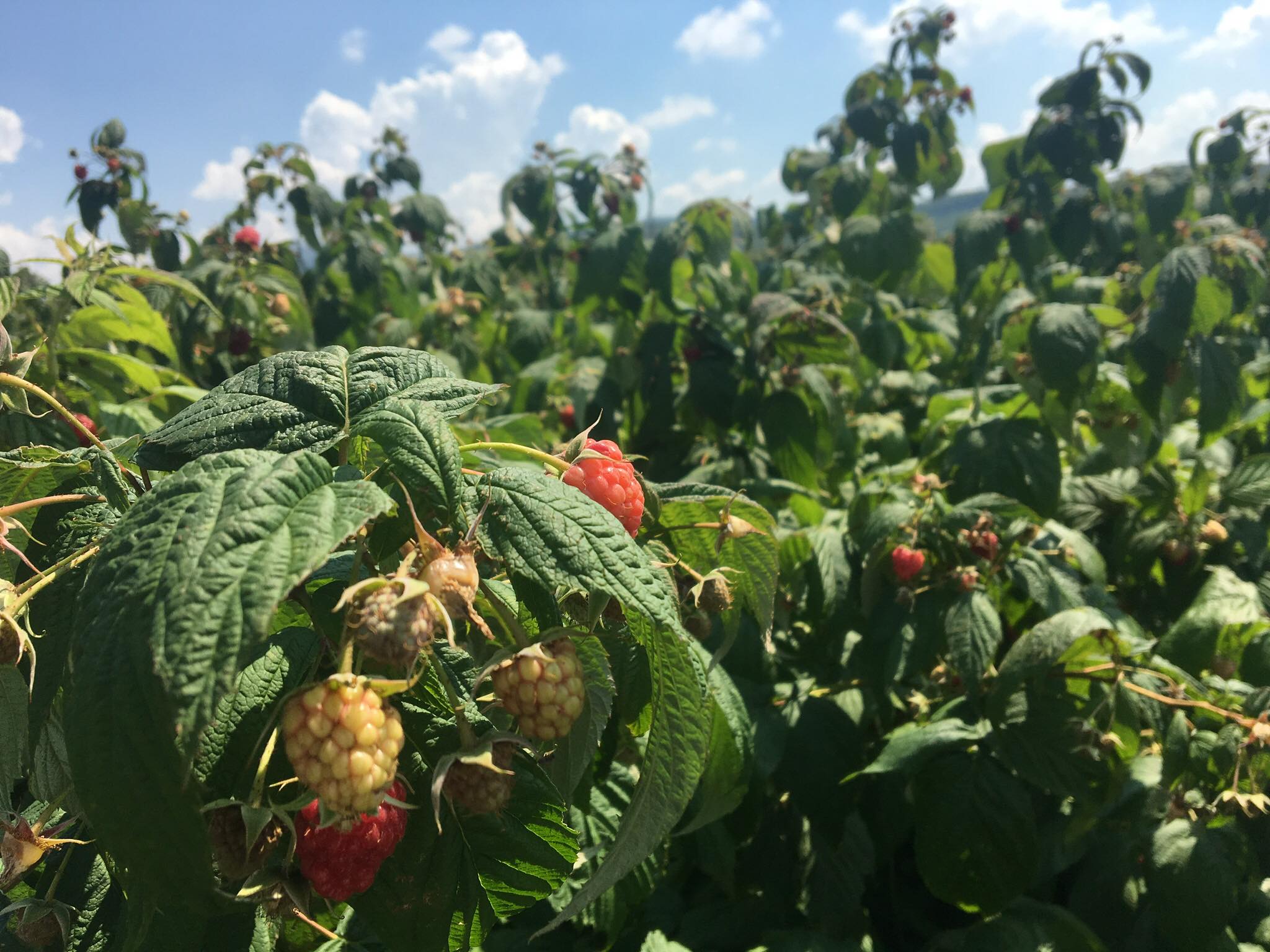 Muhaxheri expressed his dissatisfaction with the distribution of subsidies in his municipality, stating that there are very few available in Ferizaj, and that he feels as though the ministry is bypassing his region.

According to the Ministry of Agriculture, from 2015 to 2018, farmers were given subsidies valued at 400 euros per hectare, but in 2019 the ministry changed its policy, paying subsidies in accordance to the amount of fruit delivered to collection points. In 2019, farmers were paid an additional eight cents per kilogram, whereas for 2020 this increased to 12 cents per kilogram.

Muhaxheri supports the change, believing it encourages hard work. “The more kilograms you have, the more subsidy you receive, the better you are paid and the more you are obliged to work harder to be able to receive a subsidy,” he said.

That hard work has been paying off in both Ferizaj and Podujevo, where the small red fruit has provided opportunities to generate profit and small scale employment to rural communities. Meanwhile, according to data provided to BIRN by Kosovo Customs, the value of exports of raspberries has more than doubled in recent years, from less than 2 million euros in 2015 to more than 4.5 million euros every year for the past three years.

With good conditions and agricultural work being less affected by the COVID-19 pandemic, this year looks set to be another profitable one for Kosovo’s raspberry farmers, and a bright future is still on the horizon.

Kosovo must not settle for a bad deal

by Jason Emert
Next: News

Over 3,000 coronavirus cases in Germany with likely origins in Kosovo