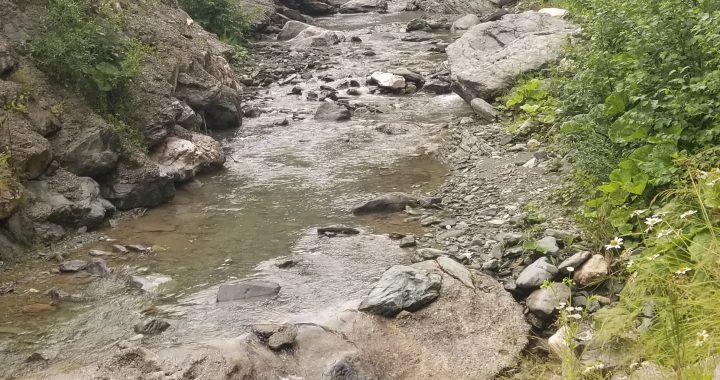 On Monday, water flow returned to small branches of the Lumbardhi river in Decan, many of which have remained dry since hydropower plants began siphoning water from the river over five years ago.

For as long as activist Shpresa Loshaj can remember, the branch of the Lumbardhi River in Decan that runs a few kilometres from the hydropower plant owned by Austrian company KelKos Energy, has been nothing but an empty pile of rocks. But that changed on Monday when she saw water running downstream for the first time in years.

Since Loshaj co-founded the environmental organization Pishtaret in March 2020, she and her fellow activists have been campaigning for the rehabilitation of rivers in Decan which have seen “overwhelming damage” since their water started to be used to produce hydroelectric power. The organisation blame KelKos’ hydropower plants for the degradation of the rivers in the region and accuse the company of operating illegally with expired environmental permits.

According to Loshaj, the reason that water has been seen along this river again is not because KelKos Energy has ceased operating, but because it has released the water it permanently stores in its pipelines for future use. She believes that the decision to release the water back into the river was taken due to recent negative publicity surrounding the dry river beds.

“KelKos have realised that they are not invincible. This is confirmation that something can be done, and the rivers are not a lost cause, as the people of Decan have been led to believe,” Loshaj tells Prishtina Insight. “This is only one small branch of the river, but it is a symbolic win for all of us who raised our voices.”

The permanent storage of water prevents access to irrigation water for farmers, she says, and by completely drying up smaller tributaries of the Lumbardhi, KelKos’ actions destroy entire ecosystems and endanger the people, flora and fauna that rely on the river.

While releasing the water is a positive step towards returning the river to its former ecological state, Loshaj is hesitant to celebrate.

“I was so excited to see so much water there, but we should be cautious, as it is very easy for them to go back to their old ways,” she says. “We also do not know how much water has been released and whether it’s enough to support life in the river, so we have to wait for the Ministry of Environment to confirm that.”

Since 2014, KelKos has built three hydropower plants in Decan. During protests against the continued operation of the plants in July 2019, activists claimed that the Energy Regulatory Office, the institution that awards environmental permits to energy companies, has been reporting that the plants have been running illegally ever since they began operating.

In June 2018 the Municipality of Decan announced its intention to file a lawsuit against KelKos for its failure to respect environmental obligations, which require that the water levels of the river cannot fall below the minimum required for the maintenance of its ecological balance – around 30% of its capacity. According to Loshaj, the issue soon fell out of public discussion and no lawsuit was officially filed.

Pishtaret were one of the groups responsible for a letter sent to the Austrian Embassy last week demanding an investigation into the allegations that diplomatic officials of the embassy have been involved in facilitating the unlawful operation of the plants. Alongside around 60 other organisations, Pishtaret also requested that KelKos’ operations be brought into total compliance with applicable environmental laws.

According to Loshaj, KelKos threatened to file a lawsuit against her and Pishtaret, giving the organisation eight hours to withdraw the letter after it was published before they would take legal action. A strategic lawsuit against public participation (known as a ‘SLAPP suit’) was subsequently filed by KelKos, but Loshaj believes it to be totally baseless.

“I am aware it is an attempt to intimidate me and others that support me,” she says. “They are trying to draw attention away from the fact that they are operating illegally and that they continue to cause damage to our environment.”

Despite numerous lawsuits being filed against KelKos in Kosovo courts, Loshaj says, none have been followed up. “People tell me that KelKos has powerful connections in the judicial system and that’s why they have never been held accountable for their actions, but I have faith in our courts,” she says. “The fact that they had the audacity to threaten us and try to deny our right to speak in defence of Kosovo speaks volumes about KelKos and their lawyers.”

Pishtaret ultimately aims to hold KelKos accountable for the environmental degradation they have caused, hoping that they will be required to rehabilitate those areas and also pay financial damages for the harm that they can be held accountable for.

However, Loshaj says that their immediate goal is to persuade the Kosovo state to fulfill its obligations. “Kosovo institutions need to stop [KelKos] from producing energy without an environmental permit,” she says, adding that no new permit should be issued until the area is rehabilitated.

Loshaj hopes that seeing the water that has returned to Lumbardhi will empower others to demand the equitable use of Kosovo’s scarce water resources. “Kosovo has the least amount of water in the region and we cannot afford to give it away so freely,” she says. “Pishtaret was created with the goal to awaken and unite democratic voices in our town, and most importantly to save our last remaining water for future generations.”