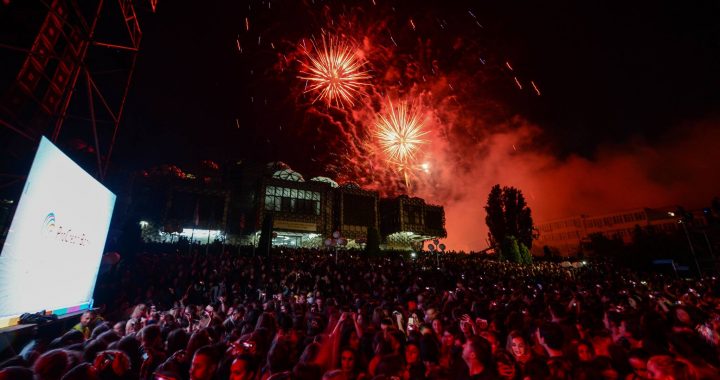 Environmental activists are calling for a boycott of the Elvana Gjata concert to be held on Saturday, arguing that fireworks endanger people and animals.

Kosovar environmental activists are threatening to stage protests over fireworks planned to be set off tomorrow night during a concert organized by ProCredit Bank.

The concert funded by the German bank has become somewhat of a tradition: once a year the bank hosts a free concert, followed by boisterous fireworks, next to the National Library in Prishtina. This year’s concert is headlined by the Albanian singer Elvana Gjata and will also include a pyrotechnic show.

But activists are concerned about noise and air pollution in the city and are calling for a boycott of the concert and a protest against the fireworks.

Last year’s show held on June 1, activists claim, raised pollution levels in the city for the next couple of days and endangered citizens and animals.

Nora Ahmetaj and Vjosa Shkodra, two Prishtina residents and activists, submitted a written request to the Municipality of Prishtina and the ProCredit Bank to halt the fireworks. But both request fell on deaf ears.

“We’ve sent the request for preventing the fireworks by email to Mayor Shpend Ahmeti and Inspection Director Mr. Brahim Mehmetaj. Unfortunately neither have replied,” Ahmetaj and Shkodra explained.

Procredit Bank, on the other hand, invited the two activists for a meeting, which they refused to attend “because our demand is clear, to halt the fireworks and not decrease the duration,” the two explained. According to what bank representatives told the two activists, the pyrotechnics will last only six minutes.

ProCredit Bank representatives have not replied to questions Prishtina Insight sent via email at the time of publication.

“The smoke from fireworks is hazardous to health. Metallic bits firework emissions present a danger to health, in particular to people who suffer from asthma,” wrote Ahmetaj quoting a study published on the Journal of Hazardous Materials.

“The noise that can come from fireworks can also cause distress in people as well as pets and stray dogs,” the activist explained.

The two activists opened a Facebook page titled “Nje Prishtine PA fishekzjarre” (A Prishtina without fireworks), which in a couple of days garnered a modest support of about 300 followers. The page admins are calling for citizens to boycott the concert to be held tomorrow night.

On Friday, the environmental NGO “Let’s do it Kosova” also joined the call for banning fireworks calling on competent institutions to prevent the pyrotechnic show.

“Apart from the National Library and faculties, there are many other residential buildings around that are at risk from the fireworks. If public institutions do not prevent this activity, we call on citizens to go out and protest it,” the NGO wrote on Facebook.

According to the law on civilian use of explosives article 23, the Ministry of Internal Affairs issues a permit for use of fireworks by civilians, while the Kosovo police is in charge of public safety.

Ministry officers did not confirm whether the ministry issued a permit by the time of this article’s publication but the Kosovo Police confirmed that all requests were submitted in time.

Spokesperson for Prishtina municipality, Miranda Mullafazliu said that the municipality had received multiple complaints about the fireworks in the past years.

“The Municipality of Prishtina has received comments and complaints because of the fireworks and pollution. If it was within the municipality’s competencies, the municipality would reconsider whether to grant a permit for setting off fireworks,” Mullafazliu said.