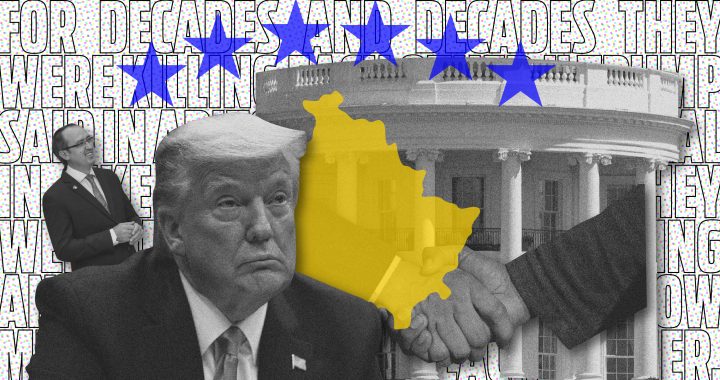 To support Trump as an Albanian is to turn your back on our own struggle for equality – a struggle we should remember as a people who have experienced segregated schools and workplaces, discriminatory laws, police crackdowns and ethnic cleansing.

Few Kosovars can forget the image of their Prime Minister, Avdullah Hoti, seated like a schoolboy in front of US President Donald Trump in the White House in September, as Trump yelled on speakerphone with a disembodied Bibi Netanyahu on the line.

Hoti may wish to forget that he agreed to abandon Kosovo’s pursuit for membership in international organizations in return for promised recognition from Israel, but Trump has not forgotten.

In a series of campaign appearances over the last week, Trump has claimed that his administration had brought an end to the Kosovo war, despite its resolution more than 20 years ago.

“For decades and decades they were killing each other,” Trump said in Arizona. “We made a deal in like about 15 minutes. They were in the Oval Office hugging and kissing and saying how much they love each other.”

In a single remark, the Kosovo-Serbia conflict was reduced to the old story of “ancient ethnic hatred” instead of the rise of fascism under Milosevic followed by the horrific ethnic cleansing of Kosovo Albanians.

Instead Trump touts that his so-called “trade deal” – in reality two separate series of pledges on a wide range of issues signed by either side but not by the US – as a diplomatic victory bringing together Muslim Albanians and Christian Serbs.

This framing of the Kosovo War as an ancient religious conflict with killing on both sides is not new to Trump, who is particularly adept at using the language of “fine people on all sides.” For example, Trump sees no difference between neo-Nazis and antiracist protesters.

His mouthpiece in Kosovo, Richard Grenell, decried Kosovo’s refusal to barrier free trade with Serbia as a barrier to peace – but not Serbia’s ongoing claims over Kosovo or the mass graves it continues to hide.

His son, Donald Trump Junior stated that US troops should abandon Kosovo for not relinquishing trade barriers with Serbia, which, to bring us all back down to earth, is a larger and more powerful neighbouring country hostile to the existence of Kosovo. Bending reality to side with oppressors is what this administration does best.

When Albanians in the diaspora express their support for Trump, they are expressing support for a foreign policy that undermines Kosovo’s independence – which, again, as a reminder, is what Kosovars protested, fought and died for from the 1990s onwards.

Trumpian policies are those that lovers of Milosevic also would have backed: the caging of migrant children, a Muslim ban and the extrajudicial killing of racial minorities. The only difference is that Albanians in the US are not the targets of this violence – other people are. To be precise, other non-white people are the targets.

Supporting Trump as an Albanian is akin to turning your back on our own struggle for equality – a struggle we should remember as a people who have experienced segregated schools and workplaces, discriminatory laws, police crackdowns and ethnic cleansing.

Kosovo Albanians were helped by those who shared nothing in common with us apart from a sense of compassion and solidarity. When we are in the diaspora, this history is not washed away. When we live abroad as immigrants and survivors of persecution, surrounded by others with similar histories of violence and oppression – who do we stand with?

There is a sentiment in our diaspora communities that we should only look after ourselves, our property and our families, at the expense of everyone else in our chosen countries. The reality of living and working in the west as an immigrant forces so many of us to work to exhaustion in order to survive.

This isolation means we are cut off from the struggles that are not our own. Not knowing the struggles of others makes it easier for us to see ourselves as uniquely hardworking and deserving – and others as complainers or troublemakers. This may explain how Albanian-Americans end up supporting Trump.

However, the fate of our community abroad is linked to that of other immigrants and asylum seekers, whether we choose to acknowledge it or not.

In Trump’s America, while refugee children from South America sit in cages, US Immigration and Customs Enforcement, ICE, has also ripped apart Albanian families who have lived and worked modest lives in the US for decades.

Examples include Cile Pretelaj, a mother who was snatched from her family in the middle of the night and deported after 18 years in the US, Sokol Vokshi, a father of two deported after 24 years in the US, Mikel Pukri, who had lived in the US since he was three years old, and Ded Rranxburgaj, who has bravely challenged his family’s deportation by seeking sanctuary in a Detroit church for the past two years.

Like the old poem goes, we must stand with others, lest no one stand with us. I’ve been lucky and honoured to help organise a racial justice series for the Albanian community in North America with academic Alicia Strong, Albanians Active Now and the Harvard Albanian Student Association.

I am inspired and emboldened by meeting Albanians who care deeply about solidarity and believe in antiracist action. They are the antithesis of the Trumpian politics of selfishness and cruelty. They capture the true spirit of what it means to be committed to freedom – we cannot be free while others are not.

Beyond this single election, this spirit must be translated into action, organizing, and protest. This is how we honour our own fight for equality. This is how we recognize communities fighting the same battle in our chosen countries. This is how we build power, not for its own sake, but in the name of a greater public good.

Hana Marku is a student-at-law at an immigration and refugee law firm in Toronto. She has reported and commented on transitional justice and gender equality for Prishtina Insight, openDemocracy and Kosovo 2.0 as a researcher and journalist.