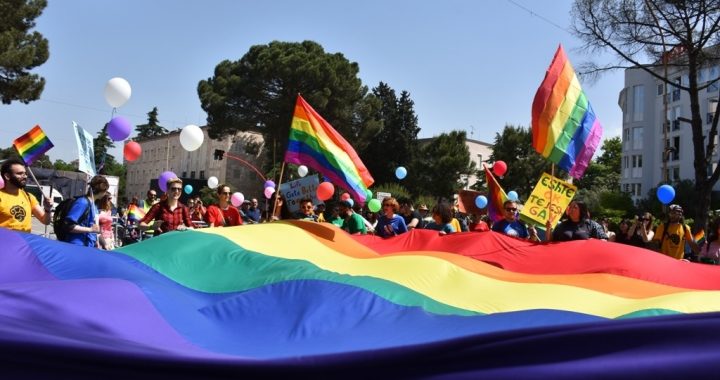 The LGBTI awareness and anti-bullying campaign faces the layered homophobia of the Albanian society, but it also heralds a new shift in queer activism.

Last month, the Albanian government along with the Municipality of Tirana and representatives of the LBGTI community began anti-bullying and awareness campaigns in public schools. The projects are part of the socialist government’s 2016-2020 strategy on gender-equality. In less than a month, a homophobic panic over homosexual ‘propaganda’ in schools has generated a host of conspiracy theories about the ‘gay agenda’ being pushed into Albanian families.

The widely watched TV Show Al Pazar for instance, ran a sketch impersonating two LGBTI trainers in a public school. As the students poke fun at the trainers with various homophobic and transphobic jokes, the scene is interrupted by the schoolteacher who walks in shocked to find the trainers talking to students about queer issues. With a speech that sounds more like the famous Albanian communist party congresses rather than comedy, the schoolteacher kicks the LGBTI trainers out of the classroom at which point the studio audience explodes into applause. In other daily and weekly TV shows such as Zone e Lire and Top Show, Xheni Karaj, one of the main figures of the Albanian LGBTI movement, has had to face homophobic attacks by various public figures accusing her of propagating the ‘gay agenda’ in an attempt to weaken, destabilize and eventually destroy the Albanian family.

The idea that the Albanian family is  under threat from homosexuals is not new but rather central to the making of the Albanian heterosexual identity. Externalized as foreign, homosexuality in Albanian history and popular culture is frequently attributed to the racial other. The recent satirical TV series Skenderbeu for instance, modeled after the national hero, presents almost all the invading Ottomans as sly, hyper-sexualized homosexuals. Meanwhile, Albanian men and women appear as witty European Christian heterosexuals who outsmart the homosexual Ottoman invaders. Indeed, ‘the invasion of schools by homosexuals’ was one of the most common terms used in the last two weeks to describe the LGBTI awareness and anti-bullying campaigns. The taste for homophobic historical novels and films where the Albanian heterosexuals outsmart or resist the homoerotic advances of Ottoman perverts has furnished an entire national narrative around Albanian manhood. For example, Ben Blushi, one of the most popular authors in the last decade, in To Live in an Island (2008) and Othello, the Moor of Vlora (2009) has employed the queer ‘foreign’ Muslim to reinforce a politicized narrative that positions Albanians as inherently heterosexual and thus, inherently European. Moving between historical fiction and fictionalized history, Blushi features characters like Ali Pashe Tepelena, presented as a ruthless homosexual despot in search of Christian Albanian men for his harem.

Blushi walks in the footsteps of Ismail Kadare, who, commenting on the Bejtexhi homoerotic poetry, which emerged in Albania during the Ottoman period, in The European Identity of Albanians (2006), suggests that the Ottomans had “a hidden agenda to unman and morally weaken” the Albanian man through “poetry about faggots.” This sentiment is visible in almost all of his works. In his most popular novel among his Albanian readership, The Black Year (1986), the heterosexuality of the main hero Shestan, who fights for the independent and European future of Albania in 1914, is constructed against that of Kuz Baba –  a violent Muslim homosexual rebel leader fighting for the Sultan. The novel was made into a popular feature film by Fatmir Koci in 2008 to symbolically coincide with Kosovo’s independence. In the film version, Koci exaggerated Kuz Baba’s predator features – characterizing him as a homosexual beast that had to be expelled from the body of the nation together with the Ottomans.

The introduction of the LGBTI awareness and anti-bullying campaign thus faces a layered homophobic history where the representation of non-normative sexualities is generally externalized as a way of Euro-heterosexualizing Albanian masculinities. Yet, now that the LGBTI awareness campaign is perceived to come from the EU or the US, the proto-European heterosexuality of the Albanian nationalist discourse seems queer. While the anchoring of the homosexual in the Muslim Other and shameful Albanian ‘Islamic’ past was aligned with the Euro-American-oriented Albanian nationalism, the externalization of the homosexual as European or American seem to endanger the ‘European’ future of Albania.

Once easily identified with US support and the US embassy, in her last appearance on Zone e Lire, Xheni Karaj corrected the talk show host Adrian Cani for calling the LGBTI awareness campaign an American initiative. “It is not a US Embassy project,” she argued, “It is the LGBTI community in collaboration with the Municipality of Tirana and the Ministry of Education.” This was an important moment – not because LGBTI communities have come to work with the local governing structures without this process being facilitated by the US or the EU, but because there seems be a break from past EU/US led LGBTI politics. In the past, such projects not only reinforced the myth of post-socialist (neo)liberal progress but made invisible the ongoing homophobic and transphobic violence throughout the Balkans. Moreover, they ignored complex sexual subjectivities, relations and networks that are not always embedded in, or embodied as, binary male/female and heterosexual/homosexual.The new direction of queer activism in Albania seems to be defined by refusal to meet both national and international heteronormative expectations.

For nearly three decades now, we are witnessing the folding of queer bodies into heteronormativity and modes of reproductive respectability curated around demands for rights, such as the right for gay marriage, adoption, military service and pride parades.

LGBTI movements have come to embrace the nation, nationalism, and family by appealing for ‘inclusion,’ reinforcing these institutions just as socio-economic structures of support continue to be dismantled by neoliberal reforms. That certain heteronormative homosexual bodies have come to be integrated, accepted and acknowledged however, is not an affirmation that we are approaching or already live in post-homophobic times but that homophobia has never been more pervasive and normalized. The LGBTI community in Albanian and Karaj’s work in particular have undertaken a powerful movement that not only challenges nationalist homophobia but does so through intersectional work that centers around the most marginalized members of the community.

In these ‘paranoid times,’ as Jasbir Puar calls them, and in the risk-management economies that we live in, the tendency to suppress creative political thinking in favor of immediate solutions is understandable, yet as queer people we must remain vigilant of the alliances we make and that those alliances cannot be anchored on the violence of others. Xheni Karaj’s courageous, creative and brilliant intersectional work is an example of emerging post-neoliberal politics of sexuality that refuse national and international heteronormative models of liberation.

Piro Rexhepi is a research fellow at the Max Planck Institute for the Study of Religious and Ethnic Diversity.