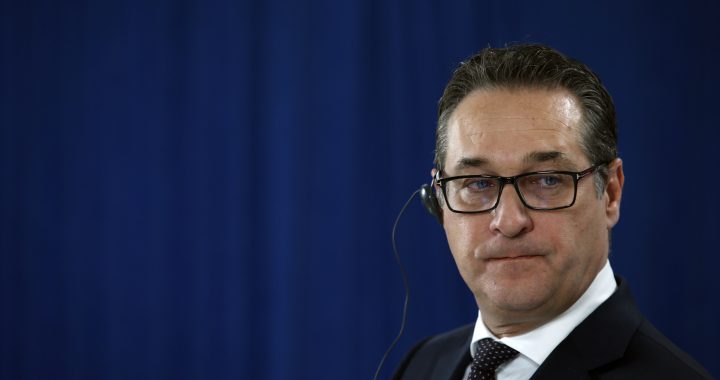 The anti-Kosovo provocateur from Vienna

Prishtina should pay attention to deputy chancellor Strache’s comments about Kosovo’s statehood, even if Austria’s recognition is an irreversible fact.

The deputy chancellor of Austria, Heinz-Christian Strache, stated that “Kosovo is part of Serbia.”   This is as true as saying that “Vienna is the capital of the Ottoman Empire.” Ottomans dreamed of conquering Vienna, and some nationalist Serbs continue dreaming of conquering Kosovo.

Officials in Prishtina should react harshly against provocations by political extremists like Strache.

Before his visit, Strache, leader of the Freedom Party of Austria, FPO, a political group of right-wing extremists, told Belgrade-based daily Politika that his party severely criticized Austria’s recognition of Kosovo, but that it is “a fact that cannot be changed.”

During his visit to the capital, he tried to clarify his interview, underlining that he said that Kosovo is, according to Serbian law, part of Serbia, but that the newspaper apparently did not communicate his statements correctly.

However, the newspaper presented Strache’s written statement that “Kosovo is a part of Serbia.” Thus, Strache’s spokesperson, who denied that Strache made this statement in an attempt to minimize any damage, was also repudiated.

Strache’s statement is dangerous, because now, with his party in the government, he speaks as the deputy prime minister of Austria (and not only as a Putin fan), as a former wanderer among the neo-Nazi scene, as a politician who wants to seize the votes of the large Serbian diaspora in Austria, as an EU critic, and as a politician of the extreme right.

We know that the Ottoman Empire never managed to make Vienna its capital and ultimately vanished from history. Similarly, the dream for Greater Serbia, which stretches from Karlobag on the Croatian coast to Durres, Albania, and Thessaloniki in Greece, has been dumped in the garbage can of blood-ridden history. The rusty poker with which Vojislav Seselj, Toma Nikolic, and their pioneer Aleksandar Vucic wanted to gouge out the Croats’ eyes can be exposed in the Museum of Nationalist Serb Madnesses of the past two centuries.

Although it seems to be clear to Strache that Kosovo’s independence is irreversible, he used the interview to call on Kosovo Serbs to enjoy their right to self-determination and autonomy. These statements are in line with Belgrade’s agenda: first, Kosovo’s partition  (President Vucic is looking for Albanian partners in Prishtina and Tirana for this project), and the partition of Bosnia and Herzegovina. Politicians from FPO are big supporters of Milorad Dodik, leader of the so-called Republika Srpska, who has advocated for the partition of Bosnia for years.

On January 9 this year, when Bosnian Serbs celebrated the (unconstitutional) day of the establishment of Republika Srpska, Dodik decorated Strache with the Order of Republika Srpska. Johann Gudenus, speaker of FPO’s parliamentary group and deputy president of the party, also participated in the nationalist celebration in Banja Luka. He received the decoration on behalf of Strache. This is the same decoration that Dodik honored Radovan Karadzic, Ratko Mladic and Slobodan Milosevic with. Gudenus’ closeness to Banja Luka is not only political: last year, in Banja Luka, he married Tajana Tajcic, as Serb woman originally from Bosnia living in Vienna.

We should not expect a change in Austria’s approach to Kosovo after Strache’s statement that Kosovo is apparently part of Serbia, nor should we expect a retraction of Austria’s recognition. Chancellor Kurz, President Alexander Van der Bellen, SPO’s social democrats in the opposition and other parties and groups who know about Balkan history will ignore Strache’s populist remark.

Austria’s Foreign Minister Karin Kneissl, who does not belong to a party but entered the government as a candidate for FPO, is a supporter of the right to self-determination and a few years ago expressed sympathy for Catalonia. “The Republic of Catalonia? States are not only born in the Balkans,” she wrote in an opinion piece on Die Presse. There, she drew parallels between Catalonia and Slovenia. Kneissl was a correspondent of Die Presse in Slovenia for many years. “What would it be like if Catalonia would declare itself independent with a referendum and then strive to join the EU? Would such a democratic country, which is more than capable to survive economically, be refused? The EU even negotiates with Kosovo!” she wrote.

Strache has long positioned himself as an opponent of Kosovo’s independence. He has even worn a T-shirt with the inscription “Kosovo is the heart of Serbia,” and has participated in gatherings against Kosovo’s statehood in Belgrade. To show his closeness to Serbian orthodoxy, Strache carries a brojanica, a type of prayer rope carried by Orthodox priests and devout believers. Strache also declared himself a fan of Ceca, the Serbian singer who was married to Arkan, a war criminal. During a concert in Vienna, Strache took a few pictures with the turbo-folk diva and posted them on Facebook.

Strache’s statement should not be ignored in Prishtina. This statement inspires courage in those in Europe opposing Kosovo’s independence. Such provocations by populists in Vienna are to be expected, because those in Prishtina who seized power with a handful of votes pretend to represent the Republic of Kosovo, but are not determined to protect the country’s independence. For example: the new head of Kosovo’s foreign ministry, Behgjet Pacolli, told Italian media that “Serbia does not necessarily have to recognize Kosovo’s independence,” and it should not surprise anyone that such words inspire courage in the enemies of independence even beyond Serbia. Strache also gives himself the right to talk about Kosovo’s territory; he talks about the principles of self-determination and autonomy for Serbs in northern Kosovo, and for Kosovo’s “merciless” behavior towards the Serb minority.

Strache’s provocation against Kosovo is another example of how the media in Belgrade manage to do politics. Strache’s interview on Sunday was widely cited in media in Austria, Germany, and the Balkans. What do media in Prishtina, Tirana and Tetova attend to? Petty, mundane political quarrels, debates between crooks, and Facebook statuses by politicians – understandably inside a provincial frame.

Have you seen any journalist from Prishtina or Tirana go to Berlin, Paris, London, or Vienna in the past years to interview experts of geostrategy and politics? If Strache talks about the right to self-determination for 60,000 Serbs in the north of Kosovo, how would it be if they found a western politician who would say: “Wait, does the right to self-determination hold true for the hundreds of thousands of Albanians in Macedonia? What about the Albanians in Presevo?”

One should not have illusions. Even after Strache’s provocation, Albanian media within the Suhareka-Struga-Saranda triangle continue to do what they are used to doing: tabletop – or even worse, coffee shop – journalism.