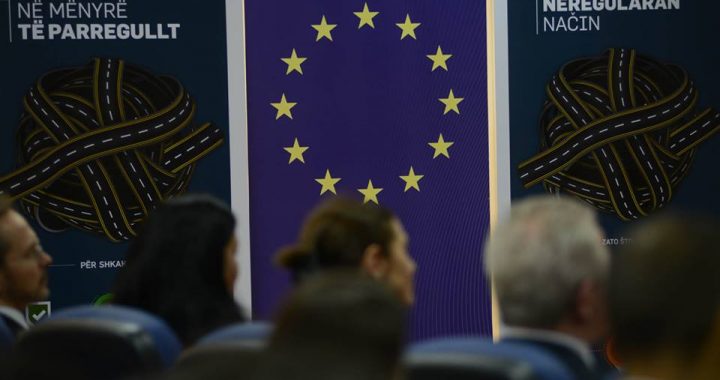 Apostolova: Youth should see their futures in Kosovo

Launching a new campaign to curb illegal migration from Kosovo, the Head of the EU office in Kosovo encouraged young Kosovars to build lives in their home country.

Launching an anti-illegal migration campaign, Nataliya Apostolova, the Head of the European Union office in Kosovo, said that Kosovar youth should focus on their lives in this country.

“This campaign aims to provide information to Kosovo citizens that Kosovo is a country for citizens, and that youth should think of their lives within Kosovo, not outside,” said Apostolova.

The campaign, part of an EU-funded twinning project implemented by institutions in the Netherlands, Austria, and Sweden, in partnership with the Kosovo Ministry of Internal Affairs, is supposed to raise awareness about the risks of illegal migration.

The campaign comes as a response to the Kosovo migration crisis, during the end of 2014 and beginning of 2015, when tens of thousands of Kosovars left the country, travelling through Serbia to Hungary seeking to go to wealthier EU countries.

Interior Minister Skender Hyseni recalled the crisis during the campaign’s launch on Wednesday.

“Our new republic found itself in an explosion of illegal migration towards EU countries in end of 2014 and during the first six months of 2015,” said Hyseni.

In cooperation with EUROPOL, Hyseni explained, Kosovo Police arrested 77 suspects allegedly involved in human trafficking towards EU countries. At least one person, Ali Fetahu, died while crossing illegally from Serbia to Hungary, an EU country which has since erected fences around the bordering areas.

In early 2015, then-President Jahjaga started touring Kosovo and meeting with citizens in an attempt to convince them to not leave the country.

On Wednesday, Dutch Ambassador Gerrie Willems said that citizens have to know what awaits them if they migrate illegally.

“Informing the public is crucial. The citizens have the right to know where this will take them, and what are the risks if they do something illegally,” said Willems.

The ambassadors called upon the Kosovar authorities to open more job positions and to increase the quality of education.