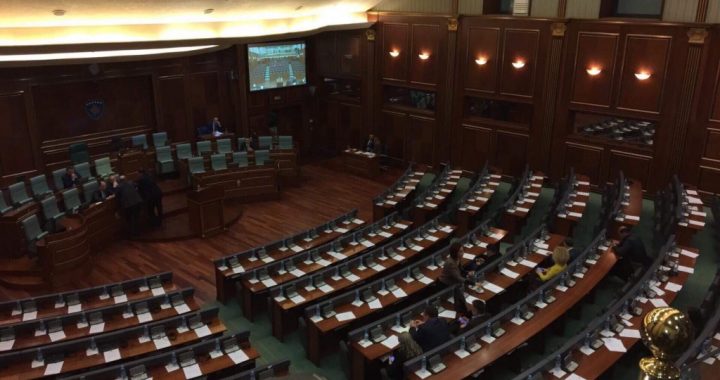 An extraordinary session initiated by the opposition Social Democratic Party of Kosovo, PSD, approved the resolution with 59 votes in favour and 2 abstentions at the Kosovo Assembly on Saturday.

The resolution will create a negotiation team comprised of the government, the opposition and civil society, who would be engaged together in the dialogue with Serbia.

The required 42 MP signatures were collected on Friday evening in order to call the extraordinary session, mainly from the governing coalition and PSD, to propose the resolution on the next phase of the dialogue.

According to PSD member Visar Ymeri, the leader of PSD and Prishtina mayor Shpend Ahmeti, and NISMA leader Fatmir Limaj, will lead the team in the dialogue between Kosovo and Serbia.

In a press conference after the extraordinary session, Limaj said that issues related to missing persons and war reparations would be among those that the negotiation team will discuss.

Although two places in the negotiation team were reserved for Vetevendosje and LDK, these will be filled by PSD MPs Visar Ymeri and Dukagjin Gorani, as the two opposition parties refused to join in on the dialogue team, and declined to be part of the session.

The name of the civil society members to be involved in the process has not yet been revealed.

LDK’s parliamentary chief, Avdullah Hoti, said that LDK would not be part of the session, and  has accused PSD of a secret partnership with the coalition government.

“This resolution is a failed effort of PSD and serves to cover the hidden coalition with the government,” said Hoti, before stating that the resolution lacks legitimacy as it needs the support of two-thirds of Kosovo MPs, a claim echoed by Vetevendosje MPs.

In a press conference prior to the session, Vetevendosje MPs Albulena Haxhiu and Glauk Konjufca stated that they reject the proposed resolution, initiated by such a “minor” political party like PSD. They said the decision would do the coalition government a favor, and that PSD would be not be fulfilling its role as an opposition party as a result.

Konjufca said that he would not be surprised to see a “reshuffling of the government” in the upcoming days, with PSD becoming part of the executive body.

Konjufca also apologized to Vetevendosje voters for having put forward the 12 PSD MPs for the 2017 parliamentary elections, referencing the dramatic split of Vetevendosje members resulting with 12 MPs leaving the party to later join PSD in May this year.

For Dardan Sejdiu, parliamentary chief of PSD, the resolution would see positive results for Kosovo. “With the resolution, we would return the process of the dialogue to the Kosovo Assembly,” he said.

Kosovo has been engaged in the dialogue with Serbia since 2011, however in recent months the dialogue has come to a standstill despite the EU’s demands for a “legally binding agreement” between Kosovo and Serbia in order for both parties to move towards European integration and membership.

It is unclear what the role of Kosovo president Hashim Thaci will be in the future of the dialogue.  Until recently, Thaci participated in the EU-mediated dialogue alongside his Serbian counterpart, Aleksandar Vucic, in Brussels. According to Prime Minister Ramush Haradinaj, Thaci will continue to fulfill his “constitutional” role, but it is still unclear how the new government team will affect Thaci’s contribution to the negotiations.