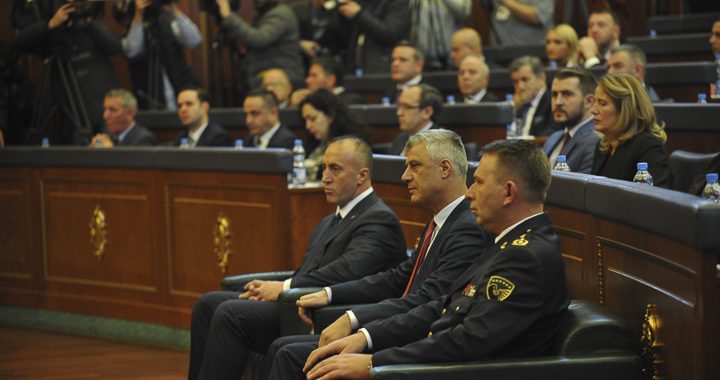 Kosovo lawmakers voted in favor of changing the mandate of the KSF to that of a regular army, with Serb MPs absent from the session.

On Friday with 107 votes in favor, none against and no abstention, the Kosovo Assembly voted in favor of passing the three draft laws that will expand the mandate of Kosovo Security Force, KSF.

The laws determine the competences of KSF, its organization and the functioning, which remains multiethnic in its composition. Article 4 of the Draft Law that passed on Friday states that “the KSF defend the sovereignty and territorial integrity, citizens, property and interests of the Republic of Kosovo.”

The vote made for an unusual parliamentary session at the Kosovo assembly, with all parties except the Serbian deputies acting in unison. The first reading of the draft laws passed through the Kosovo Assembly in October.

Up until now, KSF’s main responsibilities were operations in the areas of Search and Rescue, Explosive Ordnance Disposal, Firefighting and Hazardous Material Disposal. KSF has until now only been mandated to carry certain lighter weapons in comparison to regular armies, and the new mandate will make it possible to be more heavily equipped with weapons.

Today’s event at the Kosovo Assembly follows efforts by the Government in recent years to amend the constitution in order to change the mandate of the KSF. However, according to the Kosovo constitution, its amendment shall be valid only with the support of two thirds of the 20 minority deputies sitting at the Kosovo Assembly. The Serbian deputies have refused to give the green light to the army’s establishment and made clear that Srpska Lista would block any change to the constitution of this nature.

The only way to bypass this blockade was by expanding the mandate of the KSF by law, circumventing any requirement for constitutional amendment.

However,  Lista Srpska has consistently rejected the transformation of the KSF into a regular army, and has been in line with the stance of the government of Serbia, who primarily sees Kosovo’s army as a threat.

Yesterday, Kosovo’s president Hashim Thaci, clad in a military uniform, “inspected” the military base “Adem Jashari,” claiming that Kosovo’s army will contribute to defending the territorial integrity and sovereignty of Kosovo and will contribute to regional and global stability.

However, Fridays’s move was met objection in Belgrade.

Serbia’s president Aleksandar Vucic disparaged the vote by lawmakers in Kosovo, considering it as contributing to a heightening  of tensions.  “We are not going to beat the war drums, but we will not allow anyone to purge and humiliate the Kosovo Serbs,” Vucic said.

The international community has been polarized on the issue, with strong U.S. support on one hand, and other NATO members demanding that the transformation occurs through constitutional changes, and not via the draft laws, on the other. NATO has expressed concerns over the move, demanding “consultations” and consensus with the Serb community in order to create the regular army.

“Such a move is ill-timed. It goes against the advice of many NATO allies, and may have serious repercussions for Kosovo’s future Euro-Atlantic integration,” said the General Secretary of NATO, Jens Stoltenberg, to Kosovo Prime Minister Ramush Haradinaj in a phone call in December.

NATO has 29 member states, and many countries expressed reservations about today’s vote. Complete consensus is required between the member states before Kosovo would be permitted to establish an army in name.

The newly appointed U.S. ambassador to Kosovo Philip Kosnett has called the transformation of KSF a “historic” moment and a contribution to peace, while pledging the U.S. support. “The U.S. will support the professional development & organizational evolution of KSF, which must play a positive role for Kosovo & the region, reflecting both the multiethnic character of the country and the Kosovo people’s dedication to peace,” said Kosnett.

The transformation of KSF to a regular army is estimated to take up to 10 years, and KSF commanders have repeatedly said that the aim is for the KSF to become part of North Atlantic Treaty Alliance, NATO. Kosovo Security Force will increase its membership to 5,000 soldiers and 3,000 reserves.