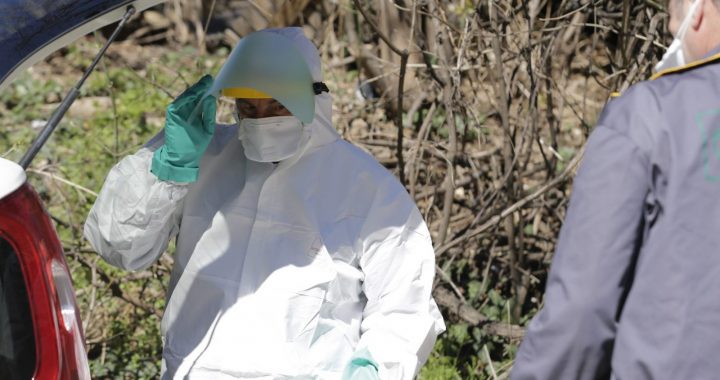 A disinfection worker prepares to clean an ambulance in front of the Clinic for Infectious and Tropical Diseases in Belgrade, Serbia, March 2020. Photo: EPA-EFE/ANDREJ CUKIC.

In another sign of the deep divisions in Kosovo, tests for coronavirus in Serb-run municipalities are being sent to Belgrade – and some severely infected people are also being transferred for treatment in Serbia.

The Belgrade-funded parallel health system run by the Serbian minority in Kosovo is sending its samples to be tested for coronavirus to Serbia – with very little or no collaboration with Kosovo’s own institutions. The subsequent treatment of severe cases is also often taking place in Serbia.

This parallel health system, which includes both health centres and hospitals, functions in Kosovo’s Serb-majority municipalities and largely bypasses the Kosovo healthcare system, instead following protocols set by Serbia. This is causing difficulties in the management of the current pandemic.

One problem is over data. Although Kosovo institutions have registered 94 confirmed cases of coronavirus, Kosovo Serbs are not part of the number. Based on the test results done in Belgrade, there are three Kosovo Serbs confirmed as infected with coronavirus in Kosovo.

On March 12, on BIRN’s TV show, Jeta ne Kosove, Srdan Kostic, deputy director of the health centre in the Serb-majority municipality of Strpce, said the moment a local Serb was suspected of being infected with coronavirus, he or she is sent “with a medical escort and with personal protection to the infectious clinic in [north] Mitrovica”, which is in northern Kosovo but operates within the Serbian health system.

“We do not have many other options, like sending them to Belgrade, but we have the nearest infectious clinic in Mitrovica,” Kostic declared.

Local hospital chief Bratislav Lazic in Gracanica, another Serb-majority municipality, has meanwhile said that the transfer of the most severe patients to Serbia had been agreed.

The three confirmed infections among Kosovo Serbs are a 62-year-old from near Lipjan, a person from North Mitrovica, born in 1976 and another from Leposavic, born in 1977.

The first patient has been transferred to Nis in Serbia. The other two are in hospital in north Mitrovica. On March 28, Lazic claimed that “their transfer [to Mitrovica] was agreed” by Serbia’s so-called Office for Kosovo and Metohija, adding that it was the same with the first Kosovo Serb “who was referred to Nis. We expect that, if there is a need for such transport, it will proceed without problems.”

The director of the Serbian Government’s so-called Office for Kosovo and Metohija, Marko Djuric, said that Belgrade had established direct lines of communication with institutions in Kosovo to allow the free passage of patents and medics to Serbia.

Djuric is publishing daily reports about the situation among the Serbian population in Kosovo on his Instagram account. His post from March 23 noted that “the issue of crossing the administrative line is being addressed with Prishtina on a daily basis.”  [Serbia does not recognise Kosovo as a state and so terms the border an “administrative line”.] The next day, his report claimed: “Freedom of movement across the administrative line provided.”

Other reports have said that testing is provided in Belgrade in the Torlak Institute of Virology, Vaccines and Serum. Djuric’s office did not answer questions from BIRN about why Kosovo Serb patients were being tested in Belgrade and how the transport of people or samples to Serbia works.

Kosovo’s Ministry of Health also did not answer queries from BIRN about why Kosovo Serbs are being tested and treated in Serbia.

On Saturday, March 29, the director of the National Institute of Public Health in Kosovo, NIPHK, Naser Ramadani, said that while testing was being done for all citizens of Kosovo, the NIPHK had information on two positive cases in the Serb-run north of Kosovo. When Kosovo Albanians are suspected of suffering from coronavirus, they are sent to the University Clinical Centre of Kosovo in Pristina, which operates within Kosovo’s health system.

Under the terms of the 2013 Brussels Agreement, the position and rights of the Serbian minority in Kosovo were defined, and parallel institutions should have closed.

Under the agreement, the planned Association of Serb Majority Municipalities should have been put in charge of the health system for Kosovo Serbs. However, the Association has not been formed and the Belgrade-funded parallel institutions continue to function.