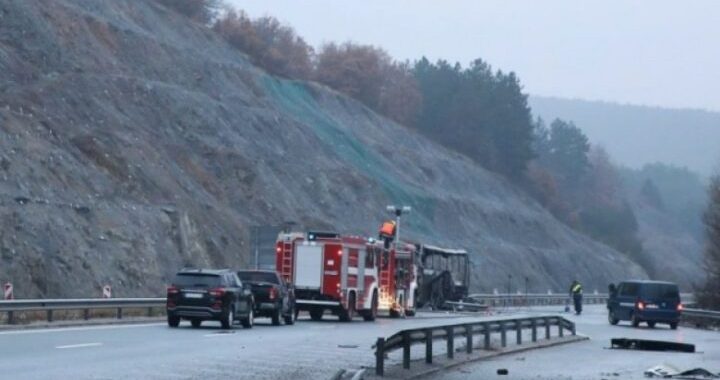 At least 45 Albanians from North Macedonia, including some children, were killed when a bus with North Macedonia plates, reportedly carrying tourists back from Turkey, caught fire and crashed on the Struma highway in Bulgaria.

An investigation has been launched after a tourist bus with North Macedonia licence plates caught fire and crashed on the Struma highway near the village of Bosnek on Tuesday morning at around 3am, killing at least 45 people, including some children, Bulgarian authorities said.

The General Director of the Bulgarian Police Stanimir Stanev confirmed for Deutsche Welle that 52 passengers were traveling in the bus engulfed in flames this morning, 50 of them were Albanian and the 2 bus drivers were Macedonian.

“The picture is terrible and not everyone can bear to see this. The victims have been severely burned and no one at this moment could tell how many there are and identify them,” Bulgarian Interior Minister Boyko Rashkov told media.

Bulgarian BGNES news agency reported that the bus belonged to North Macedonia’s Besa Trans agency and is believed to have been carrying 52 tourists from North Macedonia who were on their way back from a weekend trip to Turkey.

The bus was travelling from the Bulgarian capital Sofia towards the town of Blagoevgrad when the accident happened.

Only seven passengers had survived and are being treated for their injuries at the Pirogov emergency hospital in Sofia, doctor Maya Argirova told media.

“Of the victims… 12 in total were under the age of 18,” said Bulgarian national police chief Stanimir Stanev, AFP news agency reported.

Bulgarian Prime Minister Stefan Janev visited the scene of the accident and said that the investigation should determine the cause of the tragedy.

“We have nothing positive to say… This is a tragedy that has shaken us all,” Janev told the media.

Kosovo President Vjosa Osmani also expressed her condolences for the victims. “Kosovo knows too well the pains of such a tragedy, as it recently faced one. We will stay by the side of our sisters and brothers and we express our deep sorrow and pain for this great loss”, Osmani wrote on Twitter.

Zaev said that “we do not yet know if all the victims were citizens of North Macedonia”, the media reported.

North Macedonia’s President Stevo Pendarovski this morning announced that there will be days of mourning over the tragedy, which is on a scale unprecedented in the country’s recent history.