Cycling exploded in popularity after public transport was halted and most sporting activities were banned during the lockdown. But with cars flooding back to the streets of Prishtina, the city needs to make itself safer for people hoping to continue using more sustainable transport.

Bekim Bilalli’s bicycle repair shop, just around the corner from Sami Frasheri High School in Prishtina, has been overwhelmed over the last couple of months.

Open since 1996, Bilalli’s shop has never been so inundated with people hoping to fix up their old bikes, and he and his two assistants are struggling to meet demand. “This spring has been unbearable!” he tells Prishtina Insight, as around seven people line up with their bikes waiting for his help.

Bilalli throws bike parts to his assistants across the shop floor as they run to and from. “I’m earning more,” he says. “But we are exhausted by all these crowds of people, it’s giving me a headache.” 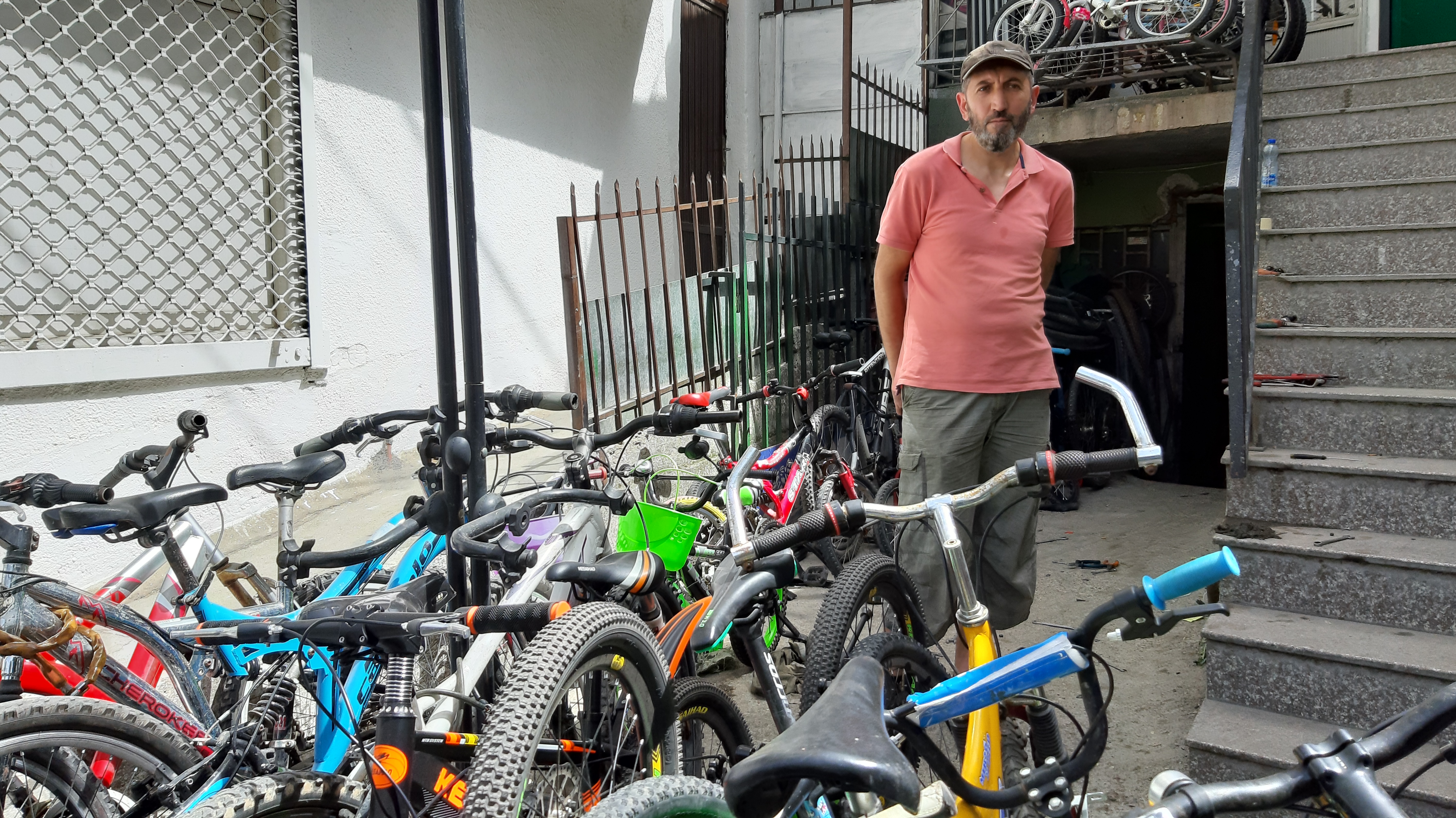 Bilalli says that spring has always been a good season for business, but that the coronavirus pandemic has increased the number of people looking to get outside and cycle. His shop is on the way to Germia national park, and he is getting frustrated with people bringing in bikes that are almost falling apart on their way to the cycle paths.

“A lot of people are bringing their old bikes to me, most likely because shops where they could buy new ones have been closed over the past few weeks,” he says. “They’ve left their bikes in the garage for years and then expect me to fix them when they are covered in rust!”

One of Bilalli’s new customers is Arbresha Kosumi, who works at the Ministry of Labour and Social Welfare. Cycling outside became one of the only ways to get exercise during the pandemic, as most sporting facilities closed their doors when the outbreak began in Kosovo on March 13.

While Billali’s assistant attaches a new bell to her handlebars, Kosumi says that she’s been really nervous to ride around Prishtina.

“At the beginning I was quite hesitant to buy a bike because there aren’t so many cycle lanes in Prishtina,” she tells Prishtina Insight. “While I was cycling at first I was always looking back and forth because I was afraid of all the cars, but I’m beginning to adapt and I’m starting to feel quite comfortable cycling around the city.” 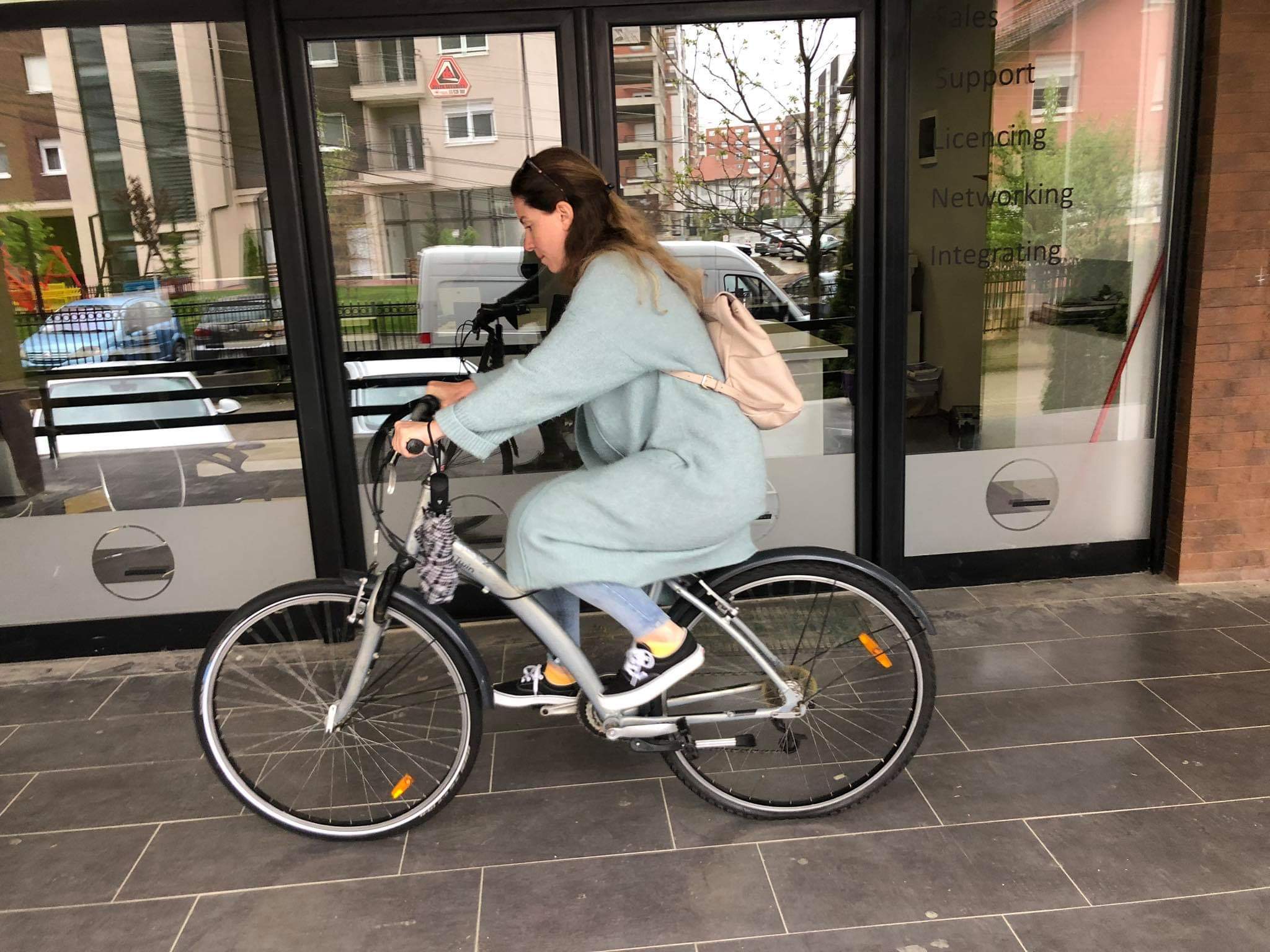 Kosumi is unsure whether to continue using her bike to commute to work after the pandemic, for both social and practical reasons. “People would look at you differently, and also there is nowhere for me to keep my bike at the ministry.”

There has been a visible increase in interest in cycling since the lockdown measures went into place. Over March and April, membership to the Facebook group for cycling enthusiasts, ‘Marakli t’biciklave,’ more than doubled, rising from 5,000 to 12,000 members.

The Municipality of Prishtina has plans in place to build 35 kilometers of cycle paths spanning across the city centre and out to Fushe Kosove as part of its larger plans for urban infrastructure in 2020, signaling a serious commitment to the promotion of more sustainable transport within the capital.

During the lockdown, Prishtina Mayor Shpend Ahmeti acknowledged the benefits of reducing traffic around the city, and voiced his commitment to making the capital more bike friendly. “After the pandemic it would be good to switch from cars to public transport, cycling and jogging,” Ahmeti said in May.

Urtina Mehmeti, a project manager for Klubi Alpin Prishtina, an NGO promoting outdoor activities in Kosovo, says there are lots of people who have reservations about using a bike in the capital. “We need to change our perceptions of cycling and consider it as an essential and sustainable mode of transport around the city,” she says. 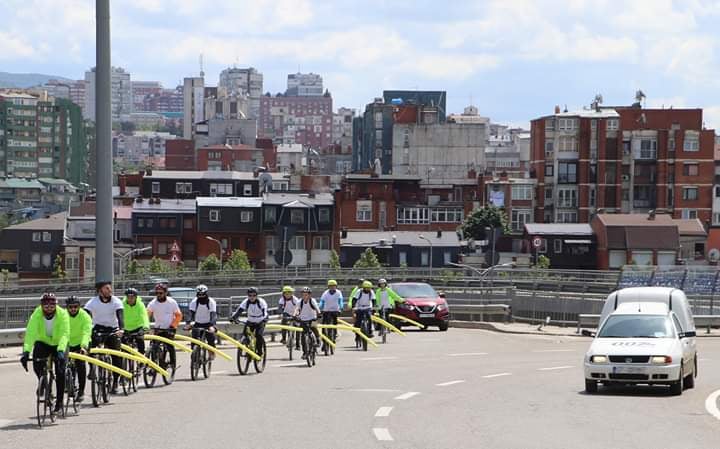 According to her, verbal harassment of cyclists is very common, especially for women cyclists. “I have used bicycles as a means of transportation for 10 years, and undoubtedly I have noticed that people’s perceptions have changed,” Mehmeti tells Prishtina Insight. “Harassment has decreased, the number of women cyclists is increasing, and people are gradually becoming more aware.”

However, Mehmeti is also worried about the increase in cycling, because the return of more cars following the lifting of lockdown measures can put cyclists in danger. “Prishtina is not a bike friendly city yet,” she says.

A lack of secure storage facilities for bikes at workplaces and in public spaces, the main reason Kosumi is hesitating to continue using her bike after the pandemic, is just one of many issues that hinders Prishtina residents from using bikes instead of cars or public transport. “Existing cycle paths are fragmented and do not meet the requirements for standard cycle paths,” Mehmeti explains. “And most drivers are careless towards cyclists.”

A Sustainable Urban Mobility Plan, SUMP, published by the Municipality of Prishtina in 2019 outlines some of the main problems that make it unsafe to cycle in the city. “Road safety issues continue to remain a concern and vulnerability for cyclists,” the report states. “There are high levels of traffic congestion and delays… many junctions and sections of road networks across Prishtina are heavily congested and over capacity.”

The report notes that the low cost of parking and poor enforcement of parking restrictions in the city centre effectively allows owners to leave their vehicles wherever they please, to the disadvantage of both cyclists and pedestrians. “Local government should take concrete steps to improve cycling infrastructure and increase cycling safety in Prishtina,” Mehemti stressed. 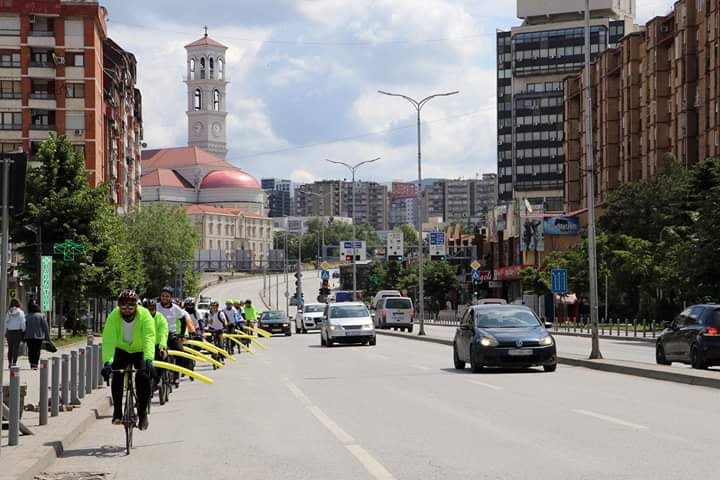 Mehmeti’s organisation has been involved in several projects promoting safe cycling in Prishtina. Klubi Alpin held the ‘Cycling March against Air Pollution’ at the end of February, blocking streets around the city with cyclists wearing hi-vis vests and facemasks. Their current initiative, an EU-supported project named #ciklosigurt, or #safecycling, aims to teach drivers to take more care when sharing the road with cyclists.

“For cyclists, being on the road can be stressful and dangerous,” Mehmeti says. “We’ve demonstrated how to keep the right distance, 1.5 meters, from cyclists, how to respect and take care of cyclists on the road,” she said.

The organisation has also planned a 50 kilometre group cycle to Lake Badovc next weekend, a chance for cyclists to meet and discuss the problems they face traveling in the city and draft recommendations to the municipality to make life easier for them on the road.

Municipalities elsewhere in Kosovo have made efforts to facilitate bike transport: the small Municipality of Shtime invested 60,000 euros this year for the construction of bike racks around the town, aiming to encourage cycling and ensure functional interconnection between the main town of Shtime and its surrounding villages.

According to Mehmeti, one of the reasons that Prishtina hasn’t caught up to more bike friendly towns like Shtime, Gjakova or Peja, all of which have facilitated safe cycling and bike lanes, is because of the capital’s many hills. However, she points out that “bicycles have evolved in the 21st century, and now they’re suitable for different terrains.”

Driton Ragimi recently reopened his athletic equipment shop in Prishtina. He believes that the reduced traffic in the city centre, and the noted improvement in air quality in Prishtina since the lockdown began, have contributed to the rise in people buying bikes. 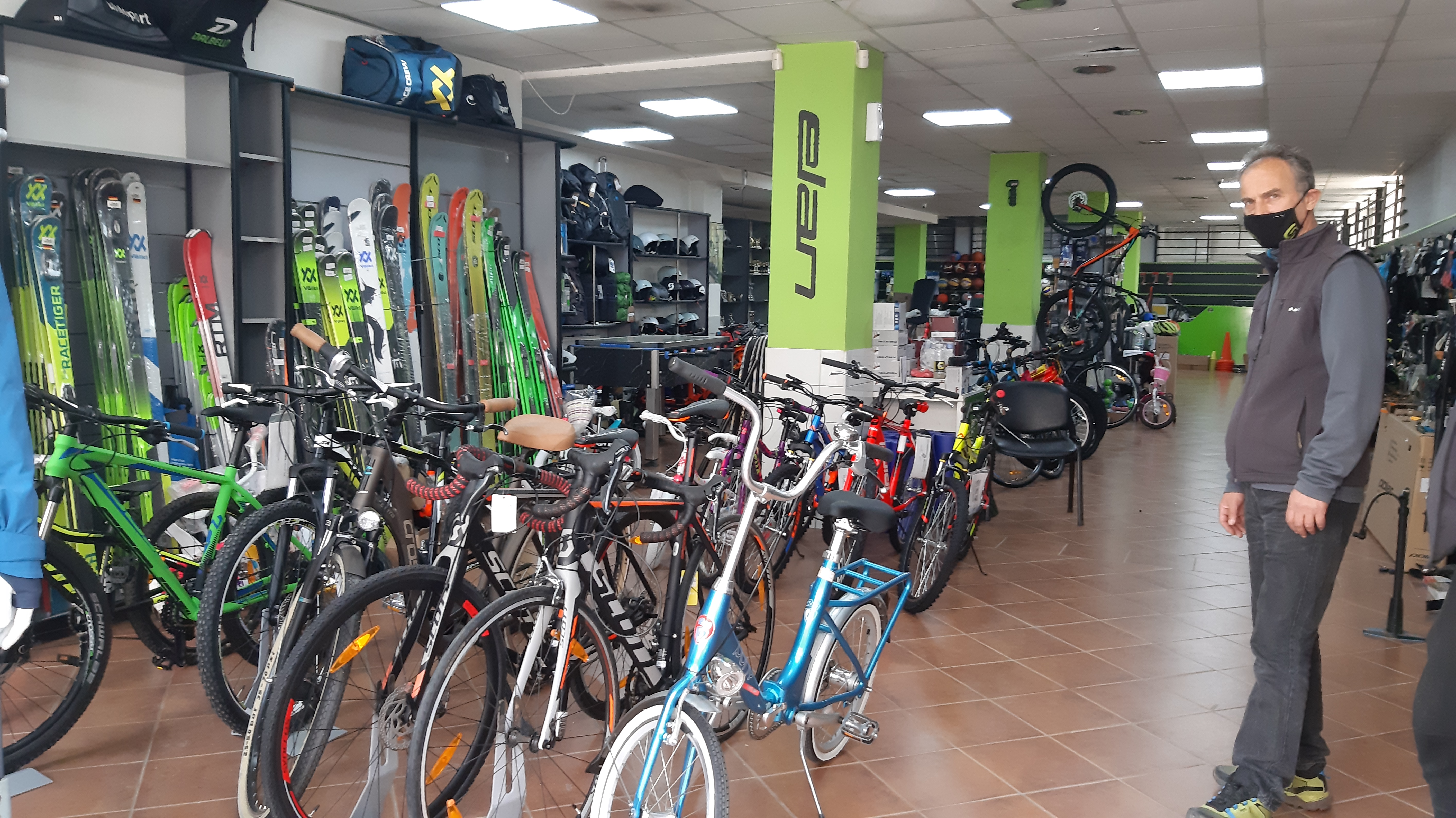 “Things have changed since the pandemic began, and we have really seen an increase in interest,” says Rigimi. “In the last two weeks, we have had a lot of customers coming in who have never cycled before. People saw that the lack of cars has made the air in Prishtina cleaner, and I think this has led to an increase in bicycle traffic around the city.”

Prishtina’s air quality has remained at healthy or moderately healthy levels throughout the duration of the lockdown to contain the COVID-19 pandemic. Even after the majority of restrictive measures were lifted on June 1, Kosovo’s recorded pollution levels have remained low.

“Although the pandemic has slowed down the pace of life and negatively affected us, we all must agree that this current situation has undoubtedly had a positive impact on the planet’s recovery,” said Mehmeti. “Even in Prishtina, air quality has improved significantly and since cars were restricted, a lot of people felt safer to ride a bike on empty streets and for them it was very enjoyable.”

by Viola von Cramon
Next: News