A celebration in Kosovo, where Mother Teresa’s saintly work began

While the whole Catholic world witnessed the canonization ceremony for Mother Teresa at the Vatican, Albanians and Croats from Kosovo celebrated her sainthood in a small village in Kosovo where the saint started her sacred mission.

On Sunday, Catholics of Kosovo from both the Albanian and Croat communities gathered in the yard of the Church of Madonna of Letnica. The first mass was held in the early morning in Croatian language for the local Croat community and those who came all the way from Croatia.

The priest’s words echoed in the church while pilgrims followed the ceremony with devotion.

An hour later, the mass was held in Albanian. The nuns prepared a children’s performance for the occasion. Meanwhile, Pope Francis was conducting a solemn ceremonial mass in Saint Peter’s Square for the canonization.

Under the watch of the Black Madonna, a statue carved in the style of Michelangelo in black wood that is supposedly 400 years old, pilgrims prayed. 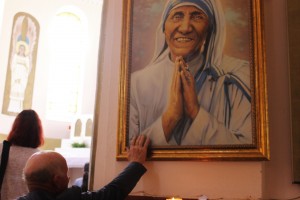 A believer touches the portrait of Mother Teresa at the Church of the Madonna of Letnica. | Photo: Rron Gjinovci

After they shook hands and wished peace upon one another, they went towards a portrait of Mother Teresa. They touched the portrait and prayed. Their calm faces looked like medieval paintings. Somehow scared and happy, but also sad for the long and devoted life of Mother Teresa, who cared for the sick, the poor, and the abandoned orphans. And today, 19 years after her death, she is entering the rank of saints.

A small church that inspired a future saint

The Church of the Madonna of Letnica, in the Municipality of Viti, began construction in 1866. The current structure was finalized in 1930. Don Marian Lorenci, the parson of the church, says that the church has miraculous powers.

“This church is famous, it was famous always,” said Don Lorenci. “People from all over the world come here and get healed.”

The church’s fame is the reason why Gonxhe Bojaxhiu, a young Albanian girl born in Skopje, came on a pilgrimage to Letnica in 1928. She would later become Mother Teresa. Two miracles, supposedly performed by Mother Teresa posthumously, have been recognized by Pope Francis, paving the way for the revered nun’s canonization into a saint.

“At that time, in the day of the church, Mother Teresa visited the church. Until that day she wasn’t sure about joining the church life. Here she heard the call and became a nun,” said Don Lorenci.

According to the official biography by the Vatican, Mother Teresa became a nun in 1928 and joined the order of the Sisters of Loreto in Ireland.

After the first ‘call’ to become a nun, according to the writings she left behind, she heard another “call within the call” to establish her own order of nuns which she decided to call “the Missionaries of Charity.” 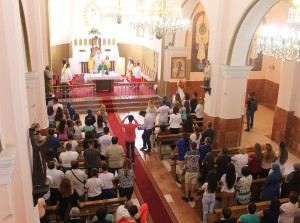 The mass at the Church in Letnica| Photo: Rron Gjinovci

Through her work, she later became well known throughout the world. Until her death in 1997, Mother Teresa used her influence to spread the message of solidarity and helping the poor. The culmination of her life’s work was in 1979 when she won the Nobel prize for peace. Two years after her death, Mother Teresa was beatified.

Though Mother Teresa was the subject of some controversy globally, the Kosovars are proud of her mark on the world.

Mother Teresa inspired a younger generation of Catholic missionaries as well. Sister Tereze Prekaj in the church of Letnica said she remembers the first time she heard of mother Teresa. “I was six and I remember when she visited Zllakucan [a Catholic village in Kosovo]. She was an inspirational figure for me, she taught us that being a nun means happiness,” Sister Prekaj said with a face full of emotion.

An Albanian Saint for all nations

The Croats of Letnica are as proud of Mother Teresa as the Albanians. Even those who do not live in Kosovo anymore come from Croatia during the feast days to celebrate.

“I live in Zagreb and I came here to celebrate the sainthood of Mother Teresa,” said Rozario Palic. “Our saint, who was declared a saint today, is originally from Kosovo, and may the world know that.” 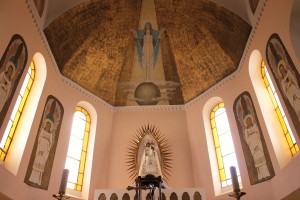 The dome of the Church of Madonna of Letnica. | Photo: Rron Gjinovci

Don Lorenci said that it is a special day of pride for him, not only as a Catholic, but also as an Albanian.

“We thank God for giving us a saint. Through her we told the world our values as a nation, the values of Mother Teresa,” said Don Lorenci.

It is not only Christians who feel proud of Mother Teresa. In Kosovo, where 90 per cent of the population is declared Muslim, the Sunday of September 4 was celebrated almost like a national holiday. Public television hosted a live broadcast of the canonization ceremony in the Vatican while special events took place throughout Kosovo.

Viti, the municipality where the Church of Letnica is located, organized a live broadcast of the canonization ceremony in the city’s theater, even though the majority of Viti’s population is Muslim. 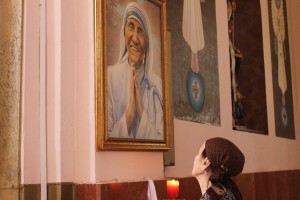 A believer looking at the portrait of Mother Teresa at the Church of the Madonna of Letnica. | Photo: Rron Gjinovci

In the village Komogllave, just a few minutes from Letnica by car, Muslim citizens expressed their pride for Mother Teresa.

“She did humanitarian work, and she always told others she was an Albanian,” said Fehmi Ramadani, a Muslim man in his fifties. For him, religion is not important when it comes to good deeds.

“I feel proud and I hope the world will have more people like her.”

Finding soul in the food of western Kosovo