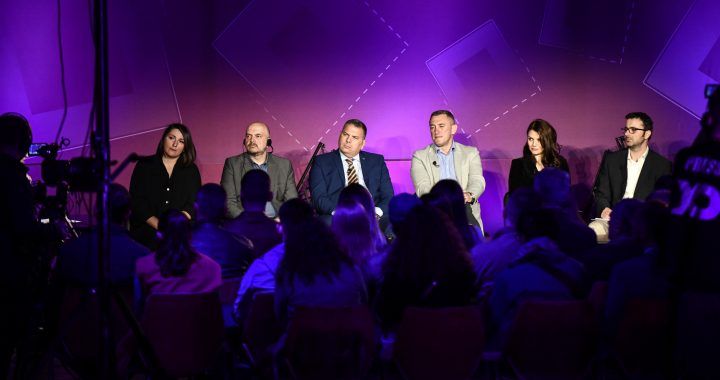 In the latest #debatepernime, ‘debate for real’ series, entrepreneurs, tech experts, politicians and business owners in Kosovo discussed unemployment in Kosovo and seeking strategies to improve the labor market for young Kosovars.

According to the Kosovo Agency of Statistics, ASK, out of 1.2 million Kosovo citizens that are able to work, only about 350,000 citizens are employed.

In the most recent in BIRN Kosovo’s televised series #debatpernime, or ‘debate for real’ organized in Gjilan, the topic of discussion was unemployment in Kosovo and survival in the labor markets as a young entrepreneur, which will be aired on RTK Thursday at 20:15.

In this debate, Arta Shehu-Zaimi shared her journey to establishing the jCoders Academy, a technology training program accredited by the Ministry of Education that has several branches across Kosovo.

“We started the jCoders Academy with 2,000 euros which we saved up on our own. We also had a grant from HELP, which bought the first ten laptops for the academy,” said Shehu-Zaimi.

Shehu-Zaimi explained how she and her sister came up with the idea for the business together. According to her, they decided to start it after they noticed some crucial issues in the labor market for the IT sector.

“We noticed two problems. First, the schools did not provide adequate teaching about technology for primary and secondary schools, and second, in our market there are a number of successful companies in the field of information technology. There is a demand for professionals in this field,” Shehu-Zaimi said.

Shehu-Zaimi hopes that her company is helping to establish an adequate body of specialists in this field.

According to her, the rapid development of technology has left the labor market of the IT sector unprepared, adding that in Kosovo there is employment potential for IT professionals and the potential to generate high profit.

Mergim Cahani, founder of the company Gjirafa, discussed the difficulties he went through on his journey to success, highlighting as well the need to have people in the field of technology next to him.

“I started Gjirafa in August [2012] inside my house in Prizren, turning it into an office. I worked for many hours, even on weekends. In February 2013, Gjirafa failed. I did some analysis looking into why this failure occured, and I came to the conclusion that, in general, it was my own fault because I tried to all work on my own,” said Cahani. “I realized that I should look for people who are better than me in this area.”

Today, Gjirafa has more than 70 full-time employees and 100 other part-time employees. But technology entrepreneurs are not the only ones that have succeeded in Kosovo’s rather difficult business environment.

Isak Vorgucic, alongside his wife, started producing their own beer, Pivdjan, as a hobby. Initially, they started making it at home, before deciding to invest and expand production.

“The market for this beer is more specific. We produce three types of beer that cannot be found elsewhere in Kosovo,” said Vorgucic. “The production was so small that I originally intended to sell all of the beer in Gracanica. Later, we expanded and began selling in two KFOR bases, two stores in northern Mitrovica, and one in Leposavic.”

The difficulties doing business in the private sector have led many people to seek employment in the public sector.

Erolld Belegu, the prime minister’s economic advisor, said that understandings of public sector employment as a safe option are only myths.

“I had an employee in my company who had a job with 500 euros per month of salary, and who left that job at the time and went to the public sector for a salary of 350 euros, having the justification that the other job is the safest one for him,” said Belegu. “I think the public sector is not meant for ambitious people, because the private sector is more demanding.”

In 2018, one third of the employees in Kosovo work in the state administration, over 90,000 employees in total, according to ASK.

The employment of more than 80 deputy ministers, appointed to the various ministries in Kosovo’s executive body since 2017, is just one decision that the current Kosovo government has been criticized for, more than doubling the number employed in the previous administration.

Belegu said that his government is already working to reduce this number, with a plan for only two deputy ministers to be appointed to each ministry, mirroring the policy of the previous administration. According to him, getting rid of certain departments would benefit its functioning.

“I hope that the future government will be limited to only 13 ministries. They [deputy ministers] are politically appointed and, once this government ends its mandate, they will be jobless,” he said.

According to politicians taking part in the debate, the situation has brought dissatisfaction, influencing young people to leave the country.

Nenad Rasic from the Center for Local Economic Development and a well-known Kosovo Serb politician said that in Kosovo, the political system should be blamed because it does not give hope or opportunity to build professionally in any field. According to him, this motivates citizens to leave the country.

Rasic said that youth migration is not a wholly negative phenomenon because, as he calls it, it has a “positive economic side effect.”

“Those who leave the country, either for survival or better opportunity, because of loyalty to their families, will then invest back home,” he said.

“The bad thing is, we have not built a system or institutions that generate hope here. The biggest psychological problem with us is that there is no hope,” he continued.

The challenges of entrepreneurial activity become even more difficult when you are a woman in Kosovo, said Besa Rugova, entrepreneur of the clothing company, Besa. Rugova explained the challenges she went through to establish her business.

“They did not take me seriously,” said Rugova. “Once, as I was going to talk to an accountant, I met my brother on the way and we went together. In all of my questions to the accountant, his answers were given to my brother, until I told him ‘this business is mine, so talk to me.’”

Some questions and comments from the public explored these challenges further.

Shaban Terziu, from the NGO Lansdowne, said the government should do something to change the situation so that young people do not leave the country. He added that investments in agriculture should be invested in the sectors with the most unused resources in Kosovo.

Ardiana Halimi, a student, asked about the government’s plan for resolving youth unemployment.

Alfred Halili asked the prime minister’s advisor whether the government had any awareness campaign for youth career development. He also asked whether a young man who has two thousand euros and wants to invest will gain support from the government.

Erolld Belegu said that the government does not have any campaign planned, adding that to start a business in Kosovo, there is economic security, except for electricity problems, which will be solved by the introduction of Kosova e Re.

The Kosova e Re project to construct a new coal-fired power plant in Kosovo was rejected by the World Bank in October 2018 and, in addition to the lack of funding for its construction, the project, in the best scenario, would be completed in 2022 and cost around 1.3 billion euros in total.