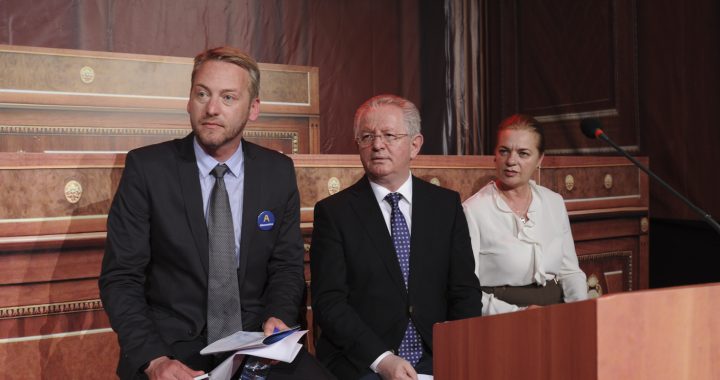 The first election debate moderated by Jeta Xharra brought former partners and longtime rivals together in a heated debate about Kosovo’s foreign policy and relations with Serbia.

Kosovo kicked off yet another short campaign season at midnight on Wednesday with fireworks, and in the evening BIRN hosted the first electoral debate between the political parties. Sparks flew at the #DebatPernime, or “real debate,” too. The country’s biggest party, the Democratic Party of Kosovo, PDK, declined to send a representative to the debate when their request to have the floor three times as long as Vetevendosje and twice as long as the LDK-AKR-Alternative coalition was denied. Their coalition with AAK, led by Ramush Haradinaj, and Fatmir Limaj’s NISMA was represented only by Ardian Gjini of AAK.

The debate on foreign affairs was dominated by the usual topics: the border demarcation with Montenegro, the controversial dialogue with Serbia and a basis for continued relations with Belgrade, and the potential creation of a Kosovo army.

After each party introduced its representatives and foreign policy priorities, the debate quickly heated up over one of the main reasons why early elections were called: the border demarcation with Montenegro.

AAK’s Ardian Gjini told Vetevendosje’s Dardian Molliqaj, “When Ramush was your partner, you lauded him. The only reason why [PM] Isa [Mustafa] brought the demarcation to the Assembly is because he knew that it would not pass.”

Dardan Molliqaj responded, “The Coalition of Crime, Ardian with Ramush did not stay with the opposition but went to Kadri Veseli, [people] they called SHIK criminals. They went to the criminals.”

Besa Gaxherri of LDK said, “Isa Mustafa was not able to bring [the demarcation deal] to the Assembly because of what you [Vetevendosje] did. LDK is known to solve every problem. You have dreamed to join the government, and when you couldn’t, you did what you did.”

Ardian Gjini said, “We are not criminals. You still need to get used to political life, you [Vetevendosje] said you never go with LDK and AAK, but you went and made a coalition.”

The discussion then moved to international recognitions, a hot topic in Kosovo, which is recognized by 114 countries but not by key international bodies.

Fitore Pacolli, who works in Prishtina mayor Shpend Ahmeti’s cabinet, said that recognitions have stagnated in the past few years, and partnerships have weakened.

“Japan, Portugal, and other countries did not vote for Kosovo in UNESCO,” she said. “We will make bilateral relations with states.”

She continued to pledge that Vetevendosje has placed Prishtina in the world map, and has built strong bilateral relations with other capitals like Zagreb. “The way that we did it proves that we are not corrupted,” she said.

Moderator Jeta Xharra asked Gezim Kelmendi of Partija Fjala, a recently established religious party, what his party would do to get more recognitions from the Middle East.

Kelmendi responded, “I think that religion should not be connected to a state exclusively. Many EU countries have blocked Kosovo’s visa liberalisation. Every government up until now is responsible for corruption and organized crime. It is not only Muslim countries that do not recognize us. Afghanistan was one of the first that recognized us. We need better relations with Turkey, the USA, and our motherland, Albania.”

Ilir Deda, who was until recently an MP in Vetevendosje but is now with Alternativa, raised the issue of the dialogue with Serbia.

“The issue of recognitions cannot be separated from the dialogue process,” he said. “[Former Foreign Minister Enver] Hoxhaj and Thaci did not deal with bilateral relations, but participated in the dialogue with Serbia to stay in power. We now need to increase domestic credibility and define Kosovo’s role in and contribution to the Balkans. We need to finish the dialogue with Serbia as soon as possible and relieve ourselves from the inertia of the PDK and give Kosovo a new face. There is no other way.”

Gjini parried, “Kosovo needs to recognize itself. We need to recognize our symbols, our flags and our anthem. It is quite a problem.”

The discussion then turned to Kosovo’s internal politics, particularly about the former coalition between PDK and LDK.

Skender Hyseni of LDK pledged that Kosovo citizens have heard many times before that LDK would not enter into a coalition with PDK.

In the 2014 election, LDK made a pre-election coalition with Vetevendosje, AAK, and NISMA, but formed the government with PDK after a six-month stalemate.

“LDK will not make a coalition with PDK, we would have not done it if it were not for the Constitutional Court decision [in 2014],” Hyseni said. “There was one condition, that LDK lead the government.”

Soon the topic that is the sine qua non of every political debate in Kosovo surfaced: patriotism vs. criminality.

Vetevendosje has long accused the ruling parties of corruption and organized crime. Molliqaj said, “Crime cannot be solved with criminals.”

AAK’s Gjini responded, “You are late to sell patriotism, you have no idea. My brother was in the KLA, my friends are in KLA, and I am proud of that.”

“The government used Turkey to boast about themselves,” he said. “We will make relations with Turkey as with other countries. We will have the same policies as the US with Turkey as well.”

“We need to oblige Serbia to pay damages, the houses, cattle, machinery. It was calculated by various organizations,” he said. “I can assure that there will no be relations with Serbia and the conditions will be set by Kosovo.”

He pledged to remove Serbian goods from Kosovo’s markets.

LDK’s Skender Hyseni, a former Interior Minister, pledged that his government “will establish the army during our next mandate, in partnership with NATO and US and three to four EU partners.”

He said that an LDK-led government would not go against the international community, but would form the army in close cooperation with NATO and the EU.