With dreams of becoming a soldier, a teacher or a graphic designer, women in Kosovo have spoken out against the discrimination they have faced pursuing their careers while wearing a hijab, and the policies and social stigmas that continue to stand in their way.

Kosovare Ramadani, a 23-year-old from the town of Shtime, has always dreamed of joining the Kosovo Security Force, KSF, and becoming a soldier. Her hijab appears to be the only thing that is stopping her.

In February 2019, Kosovare applied to the KSF, successfully passing the fitness and intelligence tests required for entry as a cadet. However, her application was refused during the interview phase in front of a panel, and her hijab was the main topic of discussion.

“During the interview, they brought up my headscarf as an issue, and I was informed that it is the main reason they refused my application,” says Ramadani. “The interviewers asked me if I would be willing to come to some sort of agreement with them, whether I would agree to remove the headscarf in exchange for my enrolment. I agreed to fulfil all the other conditions set out in the code of conduct, but I refused to remove it.” 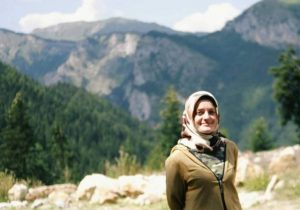 Ibrahim Shala, an official from the Ministry of Defense, says that the KSF is a professional and voluntary organization, and it would not under any circumstances bend its rules to fit the preferences of an individual concerning its uniform. Rather, it is the individual who must comply with the rules and dress code of the army.

“‘Uniform’ means all the same. If an individual insists on wearing plain clothes during their military service, they have excluded themselves from being part of the military, regardless of their intellectual and physical abilities, or even their gender. In cases like this, everything ends here,” says Shala, adding that all candidates can file complaints if they are dissatisfied with the KSF cadet recruitment process. 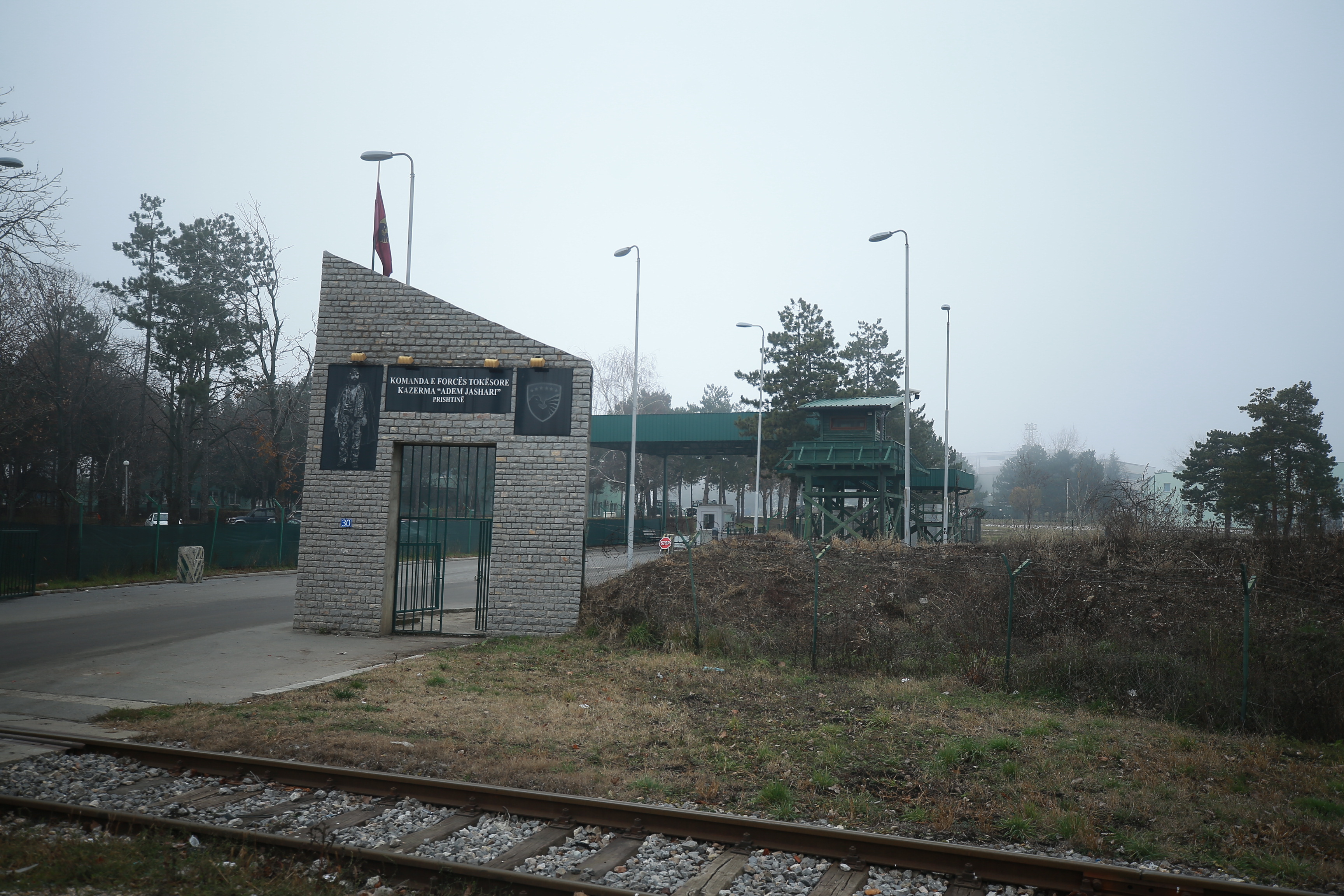 The dress code is set out in the regulation on uniforms and personal appearance for KSF members. The working uniform for women in the KSF includes “a coat, overcoat, shirt, jacket, sweater, cap and shoes, trousers and a knee-length skirt.” While the hijab is not strictly excluded from the KSF uniform, it is not explicitly sanctioned either, which poses a problem for women like Ramadani who it appears would have to sacrifice their religious expression in order to join.

Religious discrimination in the courts

Gjakova-based lawyer Edona Sina explains that the Kosovo Constitution does not mention explicitly what rights are afforded to women that wear the hijab. “In Kosovo, there is no specific definition word by word that either allows or prohibits the hijab,” she says.

Kosovo is a secular state and religiously neutral, according to the constitution. In two short provisions, the constitution sets out the principle of freedom to manifest religion, including through physical appearance and the clothes you wear, but leaves vast possibilities open for interpreting what it means to be a “secular state” and how far the right to freedom of religious expression can go.

According to lawyer Nora Huseinovic-Veliu, women wearing the hijab hoping to challenge employment discrimination often give up their legal battles not because of the indeterminacy of what “religious freedom” protects, but rather due to the high cost of litigation and the lengthy court processes in Kosovo.

“Apart from the fact that this process is tedious for victims of discrimination, it is also extremely costly to hire a lawyer whose services have to be paid,” says Veliu.

Kosovo’s judicial system has previously dealt with the issue of wearing a hijab while working in public institutions. Qefsere Fazliu, a teacher at the Isa Boletini school in Busi, a village on the outskirts of Prishtina, was dismissed in 2005 after deciding to wear the hijab in school while she was teaching.

Following an eight-year legal battle, Fazliu won her case at the Basic Court of Prishtina in July 2013 and was permitted to return to teaching in June 2014, compensated by the state for the earnings she lost in the years following her dismissal. Her case became the first in which the court concluded that hijabi women were entitled to work in state institutions free from discrimination.

According to Avni Zuka, the Human Resources Manager at the Municipality of Prishtina, Fazliu’s case changed the policy of recruitment processes in the education sector. “As of 2016, there are now several women teaching in schools while wearing headscarves,” he says.

Challenges across the public and private sector

Valentina Demolli from the Council for the Defence of Human Rights and Freedoms, CDHRF, a Kosovo human rights NGO, says that her organization have received many complaints from women who are discriminated against because of their hijab.

“We have seen cases where women have complained that they applied for a job and were refused because of their hijab,” says Demolli. “There were even cases of threats against women who were already in employment, who have been told to ‘either remove the hijab or not continue to work.’”

Demolli explains that these complaints mainly relate to public sector employment, while in the private sector there are fewer complaints. According to her, employees who have faced such discrimination are pessimistic about the prospect about winning a legal challenge to wear their hijab at work in privately-owned companies with more flexible regulation.

Despite this, Kaltrina Ferizi, who works as a graphic designer and runs her own business, says that her hijab has not stopped her from pursuing her career goals. 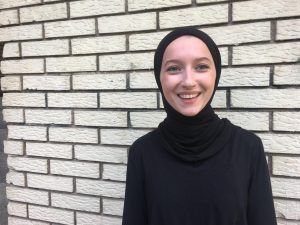 When she started working in the private sector, Ferizi’s first job was at a private company run by her brother. According to her, some Albanian clients were startled to see her wearing her hijab, but Ferizi is proud of the success that she has achieved since then in the face of a culture of intolerance towards women wearing a hijab in such environments.

“Customers were always surprised, because they don’t expect to see someone with a headscarf when they enter a creative company,” says Ferizi. “But the biggest misconception of hijabi women is that we stay home all day long and pray.”

Following the October 6 elections, Kosovo’s next Assembly will include two women wearing their hijab: Besa Ismaili from the Democratic Party of Kosovo, PDK, and Labinote Demi-Murtezi from Vetevendosje. Demi-Murtezi was elected for a second term in 2019, having previously represented the Justice Party, PD, in 2014, when she was the first woman ever elected to the Kosovo Assembly wearing a hijab.

According to Demi-Murtezi, she has never been subject to prejudice or discrimination at the hands of her colleagues in the Kosovo Assembly. “I have never had a problem with the behavior of any of my colleagues or been disrespected by them, regardless of their national or religious affiliation,” says Demi-Murtezi.

Rovena Tujani-Klinaku has held several positions as a consultant at international organizations, including the International Organization for Migration, IOM, and World Vision. Although she has been successful, she believes that she and other women who wear the hijab are subject to prejudice as soon as others see them.

“Stereotypes come from uneducated parts of society that don’t understand religion,” she says. “You can see this during televised debates, for example, particularly during electoral campaigns when they invite hijabi women as guests on the show. While some people show support for this representation, a significant number of the audience are openly Islamophobic, sometimes specifically towards the hijab.”

On the other hand, Tujani-Klinaku, who has worn her hijab since 2005, says that the way that society views hijabi women has become more tolerant and positive since she began wearing one. However, she believes there is a long way to go before women will be able to express their religion freely and without prejudice.

While hijabi women like Qefsere Fazliu have managed to successfully win their right to wear the hijab in the workplace in Kosovo in the past, for Kosovare, her battle to become a cadet with the Kosovo Security Force is only just beginning. “I think there has been a serious injustice, not allowing me to join because of my hijab,” she said. “Fighting them in the courts is my only option now.”

by Donika Emini
Next: News