As Kosovo’s lockdown following the outbreak of coronavirus enters its third week, shelters for domestic violence survivors are doing everything they can to continue providing support to women and children whose homes are unsafe.

Even under normal circumstances, Kosovo’s domestic violence shelters find it difficult to support women and children fleeing violence, but government measures to prevent the spread of coronavirus, now in force for over two weeks, have complicated matters further.

Despite the difficulties, all seven shelters currently operating in the country are still open and welcoming new residents according to Erza Kurti, a gender-based violence expert from the Kosovo Women’s Network NGO.

“Most of the shelters are ready to take in more people who are suffering domestic violence these days,” Kurti told Prishtina Insight. “For now, the situation is manageable.”

However, the provision of essential social services to the shelters is reported to be diminishing during the lockdown. According to Kurti, staff from the municipal Centres for Social Work are refusing to enter shelters for fears of being infected.

The KWN activist also says that the Centres have reduced their staff numbers during the lockdown, with almost all of them working from home.

This means very few social workers are on call and available to address cases of domestic violence that are reported – a significant problem when responding to cases involving children, as Kosovo Police cannot interview people under the age of 18 without an official from the Centre for Social Work present.

Prishtina Insight attempted to contact the acting director of the Division for Family and Social Policy at the Ministry of Labour who is responsible for overseeing the municipal centres, but received no response.

Staff at the shelters are doing what they can to stay operational, with younger workers picking up extra shifts to protect their older colleagues who have been told to stay at home.

With resources tight country-wide, shelter staff have been making their own disinfectant and protective masks, but directors of the shelters warn that this situation is not sustainable for much longer.

“If the situation continues, they will need more masks, gloves, disinfectant, beds and warmers,” Kurti told Prishtina Insight. “In addition to this, a new challenge is that they are in need of professional psychologists to deal with all the stress that may occur from the pandemic.”

Reports from areas around the world that have been dealing with the pandemic longer than mainland Europe have made it clear that instances of domestic violence are highly likely to increase within the context of the coronavirus pandemic.

The French Government reported that cases of domestic violence had jumped 30 per cent since lockdown began there on 17 March, with activists around the world anticipating an alarming rise in figures while restrictions on individual liberties continue to be in place.

According to Mirishahe Syla, a gender officer from the Center for Social Services, Counselling and Research, a similar trend is likely to occur in Kosovo.

“In Kosovo, for the most part, violence against women happens in the place where they should be safest, at home,” Syla told Prishtina Insight. “Isolation diminishes chances for women to seek help outside the home or their family. Even if they could go to their parents or to a friend, the fear of spreading the coronavirus does not allow them to move freely.”

According to the Kosovo Police, in January and February 2020, 311 cases of domestic violence were reported in Kosovo. However, when Prishtina Insight requested data for March, the Kosovo Police responded that no staff were on hand to provide the information because of the lockdown.

The Kosovo Women’s Network has reported that domestic violence shelters have received six new arrivals since measures to prevent the spread of coronavirus were approved – no significant increase or decrease compared to the norm.

However, Kurti says that this may be because pandemic situations can result in women being even more cut off from help. “Social distancing and self-quarantine can be manipulated to isolate victims from their families and social networks, as part of emotional and psychological violence and controlling behavior by the perpetrators,” she said.

The Victim’s Advocate helpline, which provides 24-hour legal advice and support to victims of domestic violence, has also not seen an increase in calls, reporting that not a single person has reached out to the helpline.

According to Syla, this is also not surprising. “Access to the telephone or other means of communication may be limited in these times of isolation, where control by abusive partners may be much greater,” she explained.

Last year saw a marked increase in the number of domestic violence cases reported to the police. The Kosovo Police recorded 1,915 cases reported in 2019 alone, a nearly 40 per cent increase on the average number of annual reports recorded between 2002 and 2017, which stood at 1,152.

The effect the lockdown is having on the report rate for domestic violence cannot be known yet. However, since lockdown began more than two weeks ago, BIRN has reported 11 instances in which the Kosovo Police have arrested individuals following a call to the police to report domestic violence.

Although official data from the police will likely not be available until the pandemic reaches its conclusion, this would mark a sharp decline in the number of cases being reported.

Isolation is not the only aggravating factor caused by the crisis that can lead to an increase in violence. Syla believes that financial strain as a result of the pandemic will also be an exacerbating factor.

“At times of crisis like this, we should also take into account the potential deterioration of economic incomes which can cause further distress,” she said. “The probability of men responding to such circumstances with violence is high, especially considering that domestic violence is normalized and accepted as ‘problem-solving behaviour’ by Kosovo society generally, and especially by men as a result of imposed gender norms related to masculinity.”

In a 2015 survey conducted by the Kosovo Women’s Network, KWN, 58 per cent of women and 47 per cent of men respondents agreed with the statement that “if a husband is unemployed, violence is bound to happen sometimes.”

The survey also criticised institutional responses to domestic violence, stating that, despite improvements since 2008, a recurring theme amongst people KWN spoke to was that “the state does not offer enough protection for women who report violence.”

It is a situation that Syla worries will be exacerbated by the outbreak. “Violence against women in the family does not get the proper attention from security forces even in the best of circumstances, and when something like the pandemic is added to it, the chances of women being listened to are even lower,” she said. 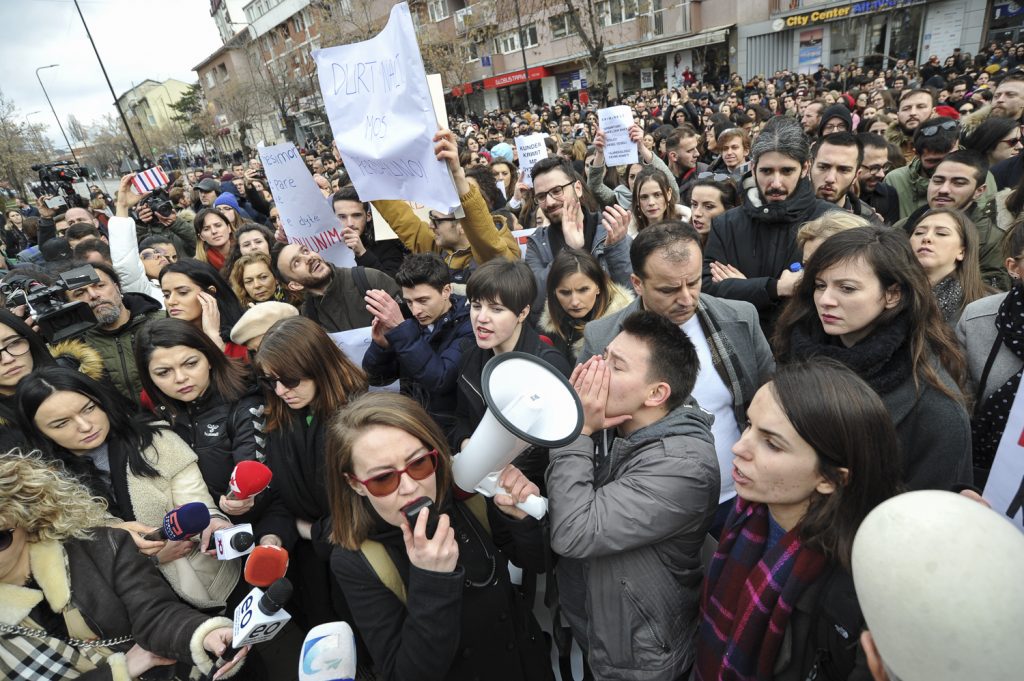 Domestic violence shelters have issued recommendations to the Kosovo Police during the pandemic, requesting that suspected perpetrators be extracted from their homes so that victims of domestic violence can remain in isolation.

“We know it is very difficult to work in this situation, but institutions should find a way to do their job properly,” said Kurti. “The shelters are recommending that police should send perpetrators to prison rather than getting victims out of the house during the pandemic situation.”

While domestic violence experts are emphasizing this approach during the isolation period in Kosovo, this is actually a policy that they have been attempting to enforce for years, according to a 2018 KWN police monitoring report.

“After violence has occurred, police still tend to take victims out of the common living quarters, leaving the husband or perpetrator in the house,” the report reads. “On one occasion observed by monitors, police kept a victim at the station for 48 hours, while the perpetrator was sent home. If a crime seems to have been committed, police should hold the perpetrator and not the victim.”

In the last four years, all of the domestic violence shelters in Kosovo have closed on two separate occasions as a result of precarious funding.

For many years, shelters were run on grants administered by the Ministry for Labour and Social Welfare alongside private financing. But in 2019, financing the shelters was incorporated into the state budget.

However, according to Syla, the shelters continue to be in a precarious financial situation that risks their closure. While the 2019 Kosovo Budget approved a separate line allocating 60,000 euros to each domestic violence shelter, none received the full amount of funding set out in the budget for that year.

“Although this budget line was approved by the Assembly of Kosovo, this line was not implemented by the Ministry for Labour and Social Welfare,” Syla explained, adding that shelters still had to apply for extra financial support last year as a result.

This is in line with Kosovo’s National Strategy for Protection from Domestic Violence 2016-2020, which required the ministry to establish a permanent budget for shelters by 2020 that would be sufficient for them to cover basic costs without any need for private financing.

Amid the operational challenges faced, the shelters are also trying to adapt responsibly to the outbreak to ensure the safety of their inhabitants.

All shelters are able to test newcomers on arrival at the shelter for COVID-19, and while access to justice services and psychological support is not available, the shelters’ directors are trying to provide those isolating with them some degree of normalcy in an abnormal situation.

“Shelter residents continue to do all the normal activities that they can do inside the shelter, as much as is possible in this situation,” Kurti said. “Now more than ever, we need to look out for the most vulnerable in our society.”