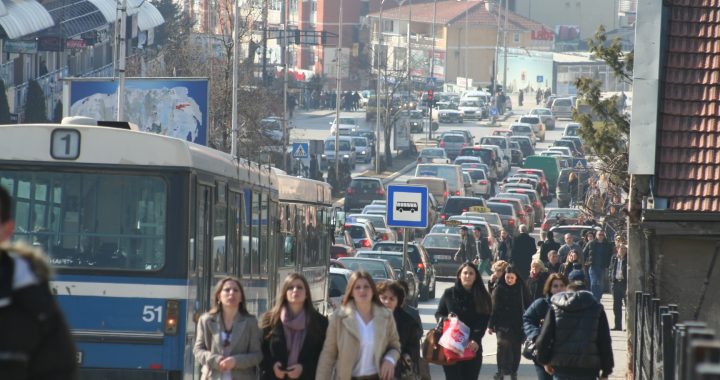 By Adlum Ramadani (Own work) [CC BY 3.0 (http://creativecommons.org/licenses/by/3.0)], via Wikimedia Commons.

Drivers aren’t the only ones to blame

Despite Kosovo’s measures taken to prevent traffic accidents, latest figures show that there has been an increase in deaths and serious injuries. Apart from blaming the drivers, institutions should change their approach and policies.

Changes to Kosovo’s Law on Road Traffic Provisions have not resulted in safer roads. If you look at data before and after the new law was adopted in September 2016, the number of accidents increased.  In over 95 per cent of the cases, police reports say that drivers are the main culprits. According to the police, unsafe vehicle maneuvers, failure to maintain proper distance, lack of speed adjustment in accordance to the conditions of the road, overspeeding, irregular lane changes, and violating the right to pass are the main causes of accidents.

As much as drivers are to be blamed, so are the governmental policies. The removal of the vehicle age limit for imported cars, the licensing of 100 technical inspection centers without oversight and inspection, road design, traffic signs, policing methods, and lack of enforcement of license suspension regulations for individuals who repeatedly violate traffic rules are only some of the factors that make Kosovo number one in Europe when it comes to the number of accidents by territorial size.

Since 2008, the law has foreseen that whoever receives nine negative points loses their license. But in the past nine years, Kosovo Police have not suspended anyone’s driver’s licence as a result of negative points. This is because for the past nine years, Kosovo Police have not yet created a monitoring system for negative points. Only insurance companies store information on drivers, which they use to increase prices for accident-prone drivers. If companies have managed to create such a monitoring system, why can’t the Kosovo Police? According to Tom Vanderbilt, the author of the book Traffic: Why We Drive the Way We Do (and What It Says About Us), “Most drivers on the freeway are reasonably skilled and willing to cooperate conditionally with fellow drivers, but there is a sizeable minority that imposes substantial costs on other drivers, in the form of accidents, delays, stress, incivility, and rising insurance premiums.” Police and courts are responsible for preventing this irresponsible minority from the road, either by removing the cars from traffic, revoking their right to drive, or issuing harsher penalties with fines or jail-time.

This leads us to another problem: the executions of traffic fines. Most fines issued by the police are not paid, some are forgiven in court, some others pass their statute of limitation. A driver could have a dozen unpaid fines (as taxi drivers often do) and register their car plates without paying up. This is allowed because there is no system for exchanging information between the police, courts, and the Ministry of Infrastructure.

Even though from January 2018 onwards Kosovo will enforce an age limit of 10 years for imported cars, the previous removal of this bar in 2015 allowed the traffic in Kosovo to be filled with old and unsafe vehicles. The average age of a car in Kosovo is 17.2 years old, or nine years more than the average in European countries. This import of old vehicles was not accompanied by a strict system of inspection by Kosovo’s numerous technical inspection centers.

At the end of last year, Gjilan regional police undertook an extraordinary technical inspection operation by ordering several vehicles to be sent for inspection. Out of the 104 vehicles that were randomly inspected (14 busses, 27 trucks, and 25 vans), all failed to pass technical inspection. A similar operation was conducted in Prizren, where out of 52 vehicles, all were shown to have technical problems, including 20 buses. The situation could not have been worse, even if inspection centers would not exist at all.

Additionally, Kosovo roads have been designed without an assessment of potential risks. Damaged roads and inadequate traffic signs also contribute to traffic accidents. Kosovo Police used to have detailed information for the most hazardous roads, at least until 2010.  For example, according to the data, on the Prishtina-Skopje highway, in Prelez – a village close to Ferizaj – 11 people lost their lives and 46 others were heavily injured. On the Prishtina-Mitrovica national road, from  Pestova to Kçiq, five people died, three of whom were pedestrians, while 19 people were severely injured. On the road from Prishtina to Peja, from the village Miradi e Eperme to Komoran, nine people lost their lives while 21 were severely injured.

After the road that divides Fushe Kosova was expanded in 2010, the number of accidents visibly increased. To refer back to Vanderbilt’s Traffic, the most dangerous roads are those that go through a social environment. In the case of Fushe Kosova, the Government has allowed the construction of a six-track road. While traffic signs require the speed be similar to one on a village road, the width of the street motivates drivers to speed up just as in a highway. It is a fatal combination for the citizens of Fushe Kosova.

While the Kosovo Police keep track of the most hazardous segments of the roads, the Ministry of Infrastructure maintains that roads are not the problem, but the drivers are. These dissonances show that public institutions do not communicate with one another. It has been years since the Ministry of Infrastructure invited the Council for Safety on Road Traffic,  whose main goal is to coordinate relevant institutions’ policies regarding road safety, to a meeting.

Everyone knows that tobacco is harmful, but a large number of people continue to smoke. Everyone knows that high speed risks everybody’s lives in traffic, but a considerable number of people continue to behave irresponsibly on the roads. Fully aware that people are irrational, many governments have started adopting alternative methods for increasing road safety. An example is Chicago. Noticing that a lot of drivers exceeded the speed limit on the touristy road along Michigan Lake and veered off the road at turns, experts proposed the marking of the road with white lines, which get thicker and create the illusion of a speed increase, in turn pushing drivers to slow down. This has lowered the number of accidents by 36 per cent. In the past few years, Albania is increasingly using similar markings on its roads as well, especially in the vicinity of roundabouts.

Thus, the Road Transport Safety Council needs to play its role, coming together with all safety and decisionmaking institutions, and come up with harsher measures to address the great problem of road safety. These measures need to foresee the establishment of an adequate system for monitoring negative points, the suspension of licenses for recurring violators, the suspension of licenses for technical inspection centers that do not do their job according to the law, and denying registration to cars whose drivers have not paid traffic fines.

Featured image: By Adlum Ramadani (Own work) [CC BY 3.0 (http://creativecommons.org/licenses/by/3.0)], via Wikimedia Commons.