For struggling Roma families in Kosovo, generous social assistance schemes from the Serbian Government are hard to pass up. But in return, their children often attend Serbian language schools, leaving them unprepared for a future life and career in Kosovo.

There are currently 102 schools across Kosovo funded by the state of Serbia and educating children in the Serbian language. These parallel education structures have been in place since the end of the war in Kosovo, operating separately from schools that teach the Kosovo state curriculum.

However, it is not only Kosovo Serb pupils that attend these schools.

Since graduating, G.S. says he has faced difficulties finding a job in Kosovo because he was never taught in the Albanian language.

“I attended school in the Serbian language because I lived in Gracanica, and the social environment meant that this was normal,” G.S. explains. “I completed my elementary and high school education [in Serbian,] then I continued my education in the Serbian language in Serbia. When I returned, even having my diploma, I haven’t been able to find a job. It’s preventing us from integrating into the system.”

G.S. is among the hundreds of members of the Roma community in Kosovo whose families hold Serbian identification documents that have been left without crucial language skills after being taught in parallel educational institutions in Kosovo that do not include Albanian in the syllabus.

Data from the Kosovo Agency of Statistics shows that around 1,500 Roma children currently attend Kosovo state schools, but exact figures regarding the amount of Roma pupils that are among the over 17,000 children attending parallel education institutions is harder to ascertain.

Program coordinator at Balkan Sunflowers, Samir Shahini, says officials from the schools show a lack of willingness to cooperate with Kosovo institutions.

“Communication with those running the Serbian schools is almost impossible. In the 12 years we have been working with pupils in the village of Plemetin, we have managed to arrange only three or four meetings with the director of the school,” Shahini explains, adding that the school’s officials have expressed distrust whenever Balkan Sunflowers has made attempts to cooperate, and the NGO is seen as a front for the Kosovo Government to intervene in the school’s affairs. 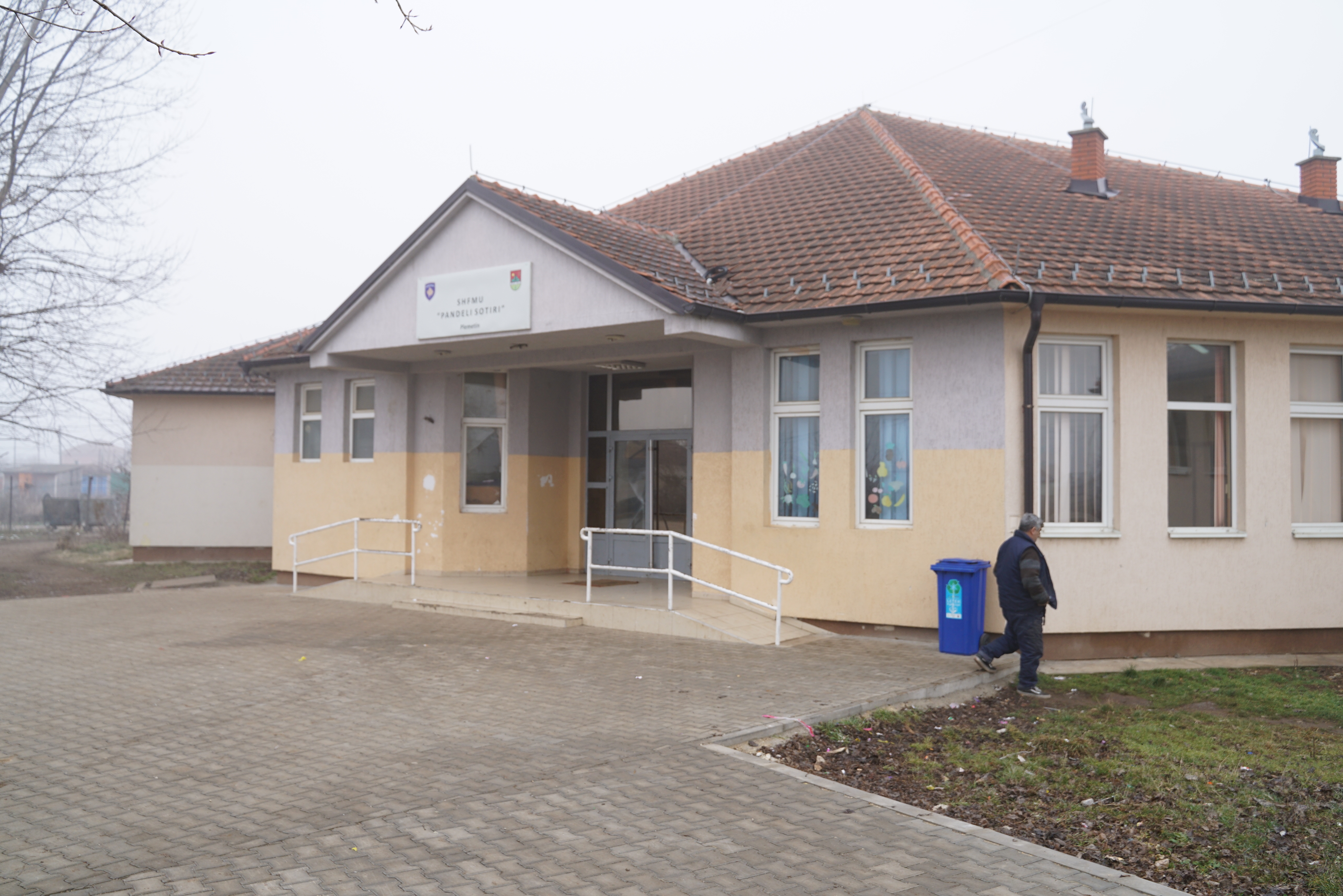 Albert Kinolli, an MP in the Kosovo parliament for the United Roma Party, believes that the Serbian Government is trying to encourage the Roma community to attend parallel institutions through financial incentives.

“The institutions of Serbia and the Serbian education system have caused divisions among the Roma community itself. Given the extremely difficult socio-economic situation of members of the Roma community, they use these situations to attract children and their families, who live in extremely difficult conditions by providing social assistance, ostensibly symbolic scholarships for their education. ” 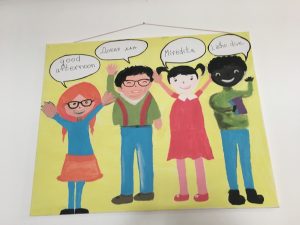 Organizations in Kosovo have raised concerns over the fact that diplomas received upon graduation at these schools are not officially recognized by Kosovo institutions. The ECMI report shows that, since 1999, graduates from all levels of Serbian-language educational institutions in Kosovo, from elementary to higher education, have not been able to use their diplomas to find employment in Kosovo’s public sector. This is despite an agreement between Serbia and Kosovo within the framework of the EU-facilitated Brussels Dialogue to mutually recognize higher education diplomas reached in September 2015.

According to residents in Gracanica and Plemetin, the main reason Roma families are encouraged to send their children to attend parallel schools are the financial incentives offered to them by the Serbian social welfare system.

With Serbia still considering Kosovo to be part of its territory, Serbian social welfare laws such as the Law on Social Protection of Serbia and the Law on Financial Assistance to Families with Children apply to those holding Serbian identification documents residing in Kosovo, including much of Kosovo’s Roma population.

According to Serbia’s Ministry of Labor, Employment and Social Policy there were eight Serbian social welfare centers working under Serbian laws in Kosovo in 2018. They were based in the municipalities of Gracanica, North Mitrovica, Zvecan, Leposavic, Zubin Potok, Ranilug, Strpce and Vushtrri.

In 2018, there were 4,333 beneficiaries of the various social assistance schemes these centers provide. A report from the ministry states that the financial social assistance provided to these families aims to guarantee a minimum income to ensure the economic security of families with children.

Since April 2019, families have been able to apply for Financial Social Assistance, and can receive a minimum of 72 euros per month, with an extra 50 per cent of this base amount (around 36 euros) added for any additional adults in the family. All families whose monthly income amounts to less than what they would receive from the ministry in social assistance are eligible for the scheme.

For each child, a family is entitled to an extra 30 per cent of the base amount, up to around 22 euros. Under the scheme, assistance for families with two parents and two children amounts to 152 euros per month, for example, and a family with four children may be entitled to up to 195 euros. To be eligible for such benefits, applicants must have documentation proving that they are a Serbian citizen, including a certificate of full-time education for children.

A child allowance, which on average is around 25 euros per month, is also available, again as long as a certificate of regular attendance at school is provided. Families are also required to provide proof of their monthly income and their address, applying on an annual basis.

For members of the Roma community that struggle to make ends meet, these financial assistance schemes allow families to make enough money to stay afloat and support themselves. 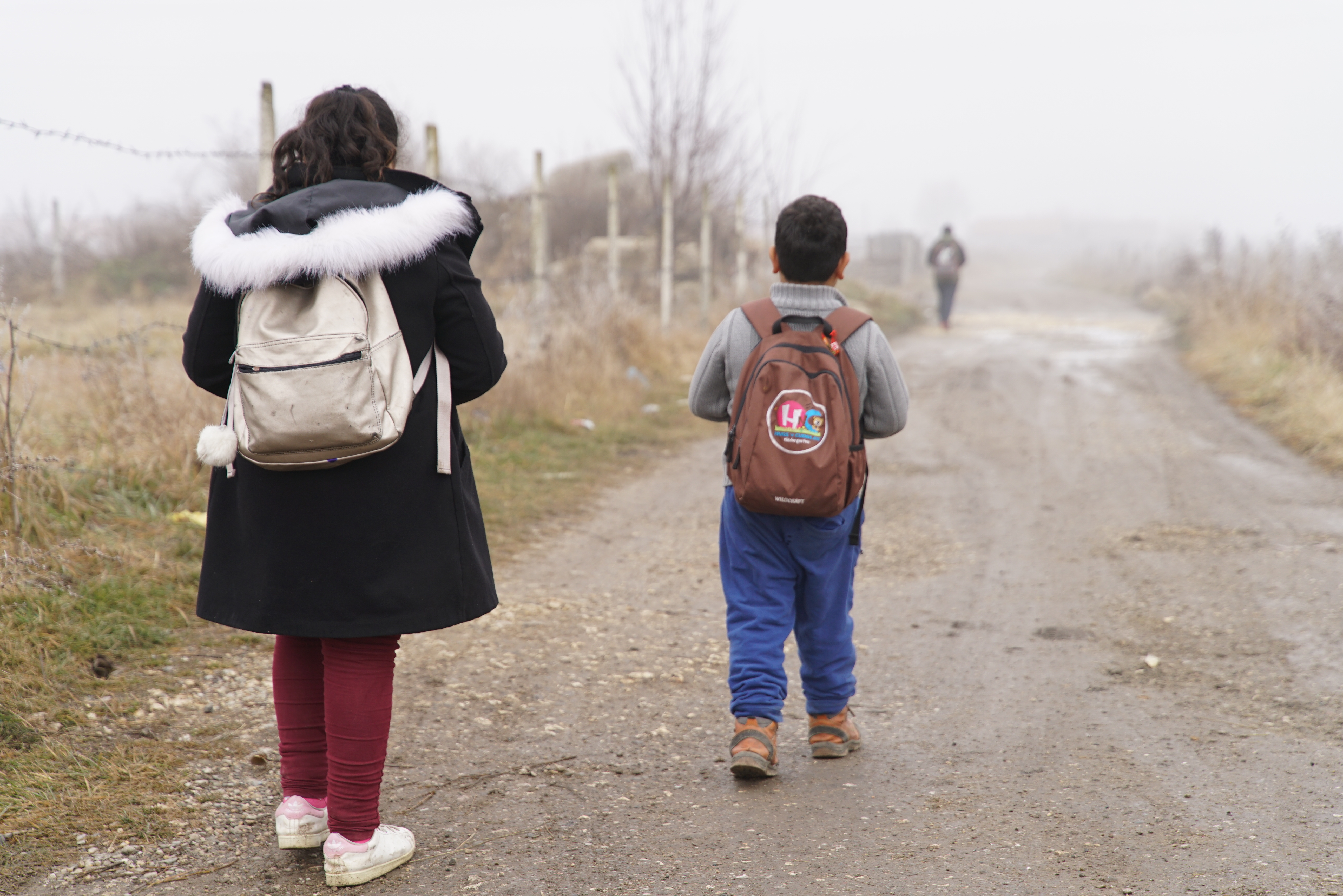 O.G., a father of five from the village of Plemetin in the Municipality of Obiliq, has utilized this scheme. Two of his children are taught in Serbian language schools, currently attending the ‘Sveti Sava’ school in the village, which has around 130 Roma pupils.

O.G. is aware that the diplomas obtained by his children after attending those schools are not recognized by Kosovo institutions. However, he has reasons beyond his family’s financial security for not sending his children to a school that teaches in Albanian.

“I do not apply for jobs in Kosovo because I belong to the Roma community, and they do not hire me for that reason. I would like to send my children to an Albanian school, but I refuse to do so because of the discrimination they could face,” he explains. “There are other parents from the community who want to transfer their children from Serbian to Albanian schools, but they also decided not to.”

On top of lack of adequate access to education, high poverty rates and poor housing are the most-cited barriers to the social and economic integration of members of Kosovo’s minority communities, according to the International Labor Organization, ILO.

The organization’s 2017 report on promoting opportunities for minority community youth states that: “Where the ‘glass ceiling’ is often used to describe barriers to senior jobs for women, for Roma, a ‘glass box’ blocks access to all aspects of employment. Despite increasing levels of education, Roma graduates often find work only in Roma-related areas, such as service delivery to other Roma, or Roma policy-related employment. There is evidence of discrimination in all aspects of employment.”

Roma families in municipalities such as Fushe Kosove and Obiliq, where O.G. and his family live, are also disproportionately affected by extreme poverty. A UNDP study in 2013 discovered that more than two thirds of the Roma community in these municipalities “face difficulties in meeting food and other basic needs,” with 74 per cent of members of the Roma community interviewed saying that they struggle to cover costs related to education for their children too.

Kosovo’s divided education system has even split school buildings in half: at ‘Shtjefan Gjeqovi,’ an elementary school in Janjevo, there are two separate education systems within the same school; one in Albanian and one in Serbian. The school is attended by 291 Albanian pupils studying the Kosovo state curriculum, while the Serbian language side of the school is attended by 41 Roma pupils and 18 Croatian pupils.

Gafurr Bytyqi, director of the school in Janjevo, believes there is no possibility to merge the two separate curriculums. 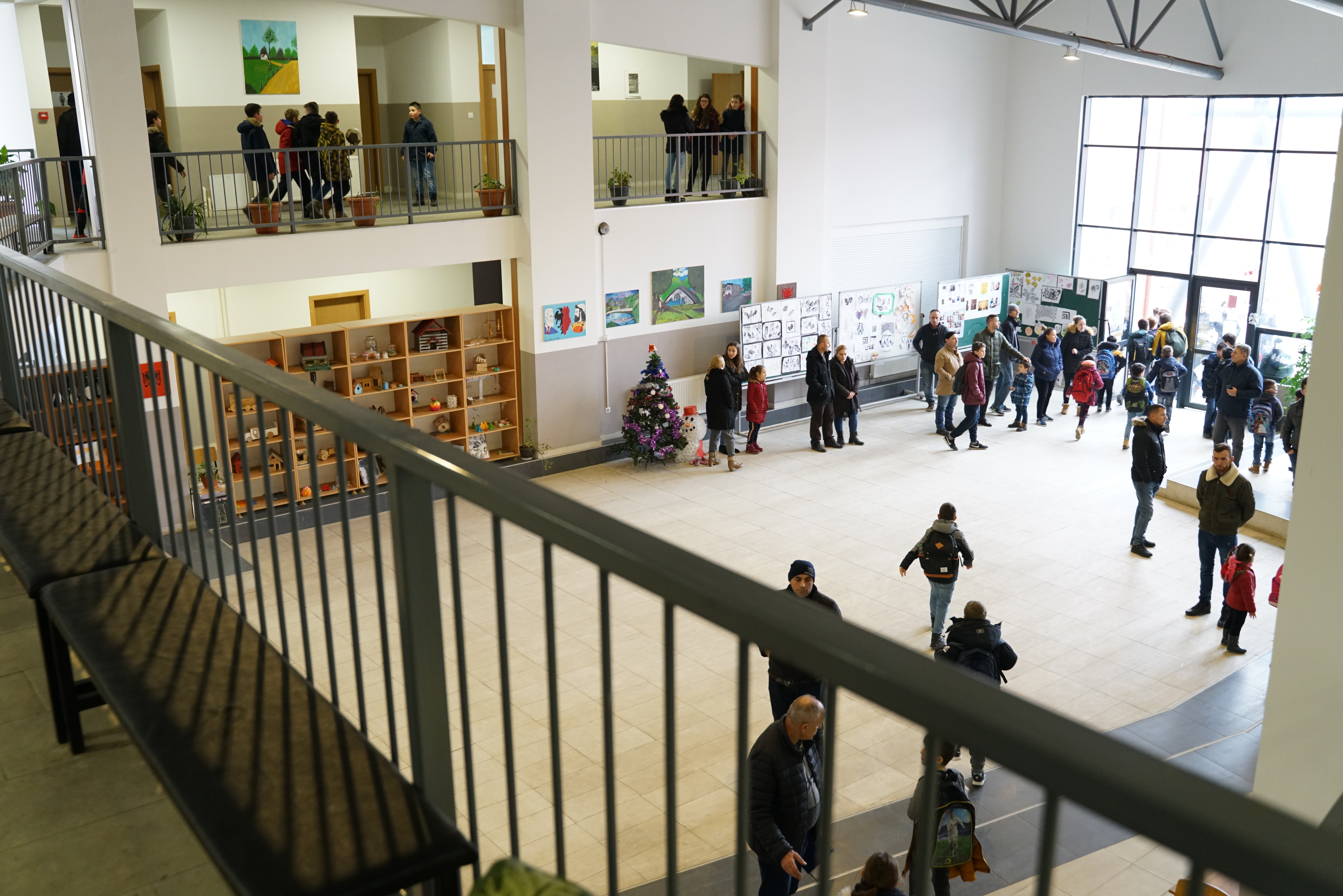 ‘Shtjefan Gjeqovi,’ an elementary school in Janjevo, with two separate education systems within the same school; one in Albanian and one in Serbian. Photo: Vjosa Cerkini.

“Within the teaching process in our school, it is understood that our teachers should teach according to the syllabus of the Republic of Kosovo, but in the Croatian classes, as we call them, they are taught using the Serbian syllabus. We are aware that this happens, but we do not have the power to stop it and have no reason to interfere,” said Bytyqi. “Despite what I said, however, we have good relations with the Croatian teachers, pupils, and with the Serbs involved in the teaching process. While we do not have any bad relations, we also do not have any kind of cooperation.”

Dukagjin Pupovci, the director of the Kosovo Education Center NGO, says the answer as to why the Serbian government would continue to support these institutions is political rather than educational.

“In the field of education, a Serbian parallel system within the territory of Kosovo continues to be present. In fact, this is a political issue that our governments have never dealt with, giving priority to the merging of Serbian structures in areas most sensitive to Kosovo’s security, such as the police and the judiciary,” says Pupovci.

The Ahtisaari Plan, a UN-drafted proposal published in 2008 that was widely heralded as the plan that set Kosovo’s independence in motion, sets out a framework for the rights of non-Albanian communities in Kosovo. The plan explicitly provides that minority communities should be able to protect and promote both their language and their right to an education in that language. While the establishment of a framework that would allow this was foreseen in the plan, a separate curriculum for Serbian-language schools remains undrafted. In the absence of these provisions, Serbian language schools have gained a sort of autonomy over the last decade.

According to Pupovci, Kosovo law provides Serbian-language schools the opportunity to put in official requests for permission to use the Serbian curriculum and textbooks used by schools in Serbia. “But to do so, they must notify the [Kosovo Ministry of Education, Science and Technology], which – as expected – they refuse to do,” says Pupovci.

Denis Galushi, a journalist working for a Roma language program at Radio Kosova, believes that the choice of many families of the Roma community to attend schools in the Serbian language comes as a result of the need for a more sustainable financial income, with the parallel system working in favor of families seeking social welfare from Serbia and Kosovo. However, he points out, this can this can come at a price.

“But citizens become the victims of a political system that enables them to take these advantages: from a proper education to eligibility for employment, the Roma community are now more integrated into the system of the Republic of Serbia than the Republic of Kosovo.”

Foreign embassies get involved in wrapping up govt deal