While most Kosovars were winding down for the summer months, a group of young Gjakovars were burning the midnight watts to finalize the first teen-made electric car ever built in Europe.

Over the last year, six young people from Gjakova’s makerspace BONEVET (Do it yourself) have been working to bring new life to a Renault Twingo, transforming it from a petrol-fuelled car to a fully functional electric car. The final project had its first test drive in Gjakova’s bazaar last month and was presented to the public today.

Everything started in early 2016, when BONEVET’s staff and founder Vllaznim Xhiha decided to shift the Gjakova makerspace into higher gear. Since its founding, the NGO has mostly focused on small engineering projects, but they wanted to take on a bigger, environmentally focused initiative.

Thus the idea of the Electric Vehicle IPKO BONEVET (EVIB) project was born. Then it was time to find the makers. After a selection process led by BONEVET’s staff, six youngsters, ages 14 to 16, were selected from 20 candidates to conduct the one year project. 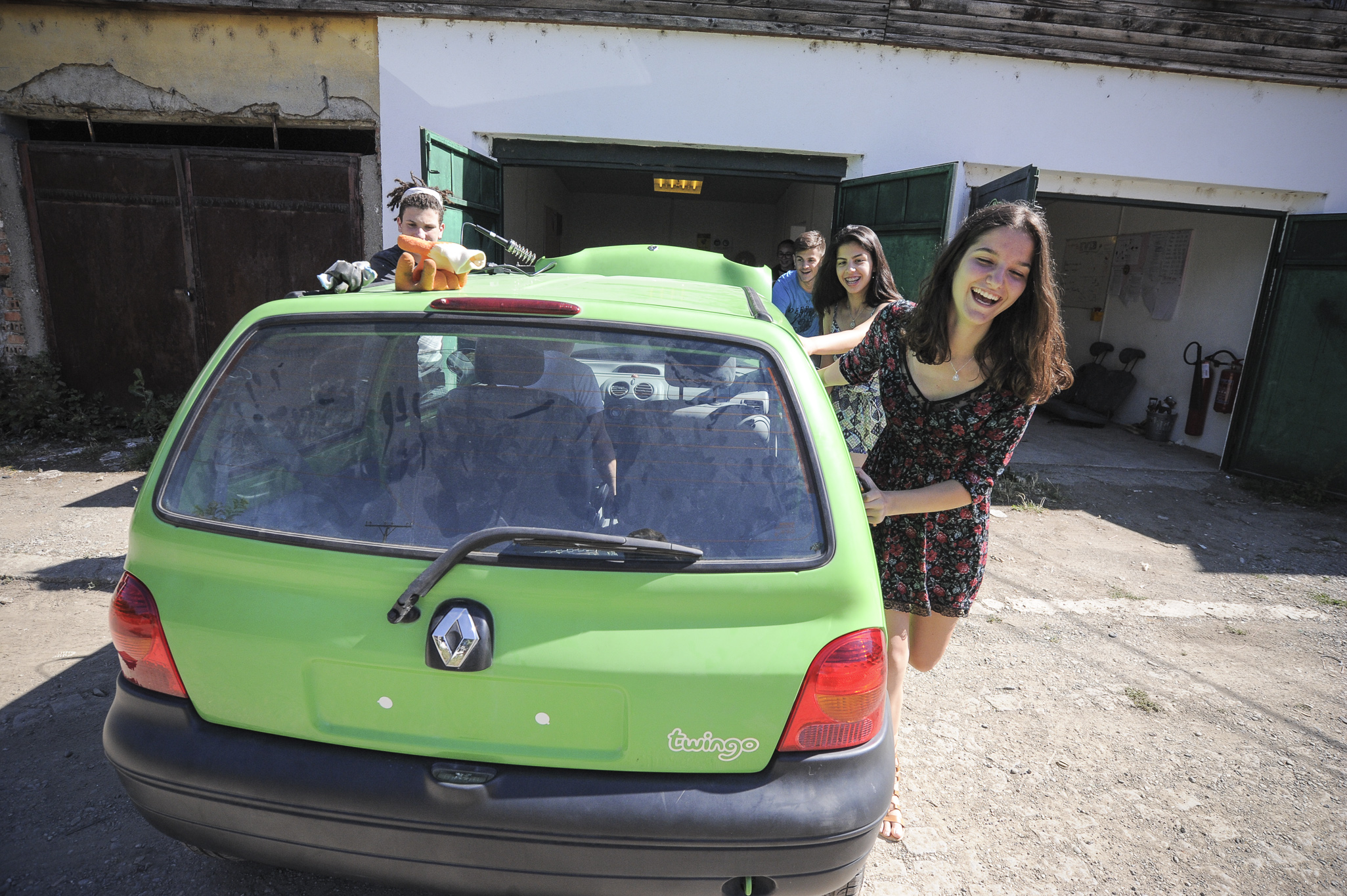 The team pulling the car out of the garage. | Photo: Atdhe Mulla.

“We selected three boys and three girls. This was really important for us,” emphasized Xhiha, who has been an advocate for gender equality in BONEVET from the start.

The team of six budding engineers, supported by their mentors, learned all the basics of electric car making, including 3D design, electronics, and mechanics, all while keeping to tight deadlines.

It was a hands-on process for the youngsters, who at times learned through trial and error.

“I learned design while working. I knew just a bit, but I had these very difficult pieces to design. I almost learned every tool and had to design the whole car in just one week,” Dion Doli, a 16-year-old maker and one of the 3D design specialists, recollected.

The makers dedicated all of their free time to coming to the makerspace almost every day this past year to bring their project to fruition. Being faced with complex challenges became routine for them.

The makers also had to learn to work as a team, they explained.

“In the beginning, we really did not know how to communicate and we were not team players. But, we got the hang of it and instead of going our own way, we turned to each other for help,” Enisa Muhaxhiri, 16, said. “We learned to accept someone else’s opinion when it is better than your own,” added Buna Perteshoni, the 16-year-old time management expert of the team.

Lumi Zhubi, a 15-year-old who has been a member of BONEVET since the very beginning, told Prishtina Insight about one of the most nerve-wracking parts of the project.

“We had pressure when we were mounting the batteries because we waited for them for six months, and the batteries are the most dangerous thing in the car,” he said. The final stage of the process was to connect and install 40 battery packs – weighing close to 100 kg in total – which store and provide the energy needed to run the electric motor.

It took several days of work in the garage, where temperatures sometimes reached 40°C, to finally mount the batteries and switch on the car. 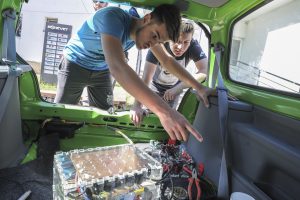 Dion Doli showing us the inside of the electric car. | Photo: Atdhe Mulla.

The team hopes that their project will cause the local community to be open towards electric cars. Buna and Gezim Haziri, two 15-year-olds, would like to see the car used regularly to “drive around the old Bazaar and stop CO2 emissions.” They insist that electric cars would reduce noise and air pollution in the city.

Doli acknowledges that most people still need to be convinced of the positive benefits of electric cars, especially because they are seen as expensive.

“I usually just tell people that it would only cost them only one euro to go to Prishtina with an electric car,” he counters.

The team looks forward to new projects, such as possibly partnering up with car companies to build solar and even hydrogen-powered cars. They also hope to expand BONEVET’s reach across Kosovo, to get more youth involved in the makerspace.

Beratrisa Zherka, the youngest team member at 14 years old, said, “people were amazed. They couldn’t believe that we, at our ages, just did this amazing work… and others can do the same, others can learn!”

Now that the project is complete, the only irony is that none of the makers are old enough to have drivers licenses’ yet. To this, Zhubi cheekily responded, “But we all also have good Photoshop skills.”

by Kastriot Berisha
Next: Big Deal

The (Il)legality of Serbian Documents in Kosovo