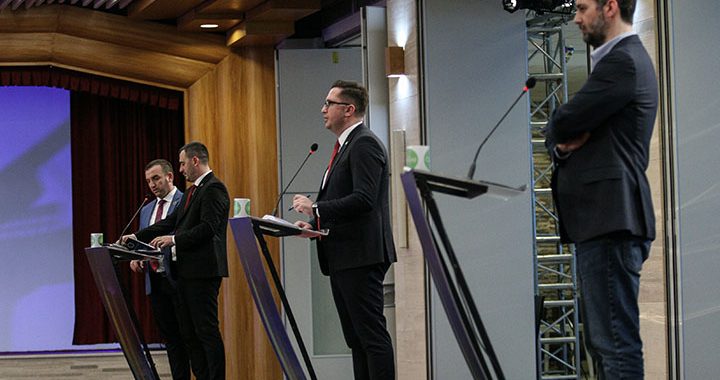 Energy, environmental and agricultural issues in the spotlight

Vetevendosje, LDK, and AAK officials discussed how to address problems with the hydropower industry, meet the needs of the energy market and support Kosovo’s agricultural sector in a BIRN electoral debate on Friday.

On Friday night, representatives from the Alliance for the Future of Kosovo, AAK, the Democratic League of Kosovo, LDK, and Vetevendosje discussed issues relating to the environment, energy and agriculture, in another installment of BIRN’s pre-election DebatPernime (Debate For Real) series.

BIRN’s Jeta Xharra opened the programme by highlighting the degradation of the country’s rivers, criticising previous governments for allowing numerous companies to construct and operate hydropower plants that have damaged the environment, fauna and the lives of local residents.

Besnik Krasniqi, an AAK candidate for MP and an official at the Ministry of Environment and Economy, stated many of the issues are rooted in a lack of law enforcement. “Kosovo has problems with implementing the law, starting from corrupt inspectors,” said.

Krasniqi added that, if AAK took control of the ministry in the next government, the party would legislate further to improve hydropower operations in Kosovo. “We need to make hydropower plants eco-friendly, and we need to use these resources without damaging nature,” he said.

However, Hajrullah Ceku, who served as an MP for Vetevendosje in the previous mandate, argued that AAK does not have a good record in terms of protecting rivers.

Ceku added that under a Vetevendosje-led government all licenses for hydropower plants would be reviewed and that companies would be stopped from operating if they do not comply with procedural requirements. “We need to analyse all documents that these hydropower plants pretend they possess, and introduce a moratorium on constructing hydropower plants across Kosovo,” he said.

LDK’s outgoing Minister of Agriculture Besian Mustafa also stated that a government led by his party would also “review documents” related to this process, while the representatives from all three parties also pledged to increase the numbers of environmental inspectors in Kosovo in order to ensure the law was properly implemented.

However, the candidates were divided on the issue of the construction of a new power plant in Kosovo. A new coal-fired power plant, Kosova e Re, has been foreseen since 2005, however a contract to construct the plant signed between former prime minister Ramush Haradinaj and power generation company ContourGlobal looks in serious jeopardy.

AAK’s Krasniqi stated that Kosovo should push on with the construction of a coal-fired power plant in order to meet the country’s energy needs, but insisted that it should meet the highest ecological standards. Ceku and Mustafa on the other hand stated that the country should look to renewable energy and green alternatives to meet the needs of the energy market.

Turning to agricultural issues, Xharra stated that only 20,000 hectares of farmland in Kosovo are linked to the country’s irrigation system, adding that only 50 million euros of the 2.4 billion euro state budget is allocated to agriculture.

In response, Mustafa promised that under an LDK government the irrigation system would be extended, providing water to 40,000 hectares of land, while Ceku stated that the system should be extended to every municipality.

Ceku added that Vetevendosje would focus on reviewing the distribution of subsidies to farmers and avoiding clientelism. He said that the party would also double the budget for agriculture from 50 to 100 million euros, with an emphasis on providing grants to small-scale farms.

“We will not allow the state to distribute the people’s money to the rich,” he said. “The state does not need to stimulate big businesses.”

To avoid irregularities and help tackle corruption, AAK’s Krasniqi proposed that grants for farmers be distributed through an online application system. He added the party would provide large financial support to the food production system.

All three of the representatives also stated the need to reduce fuel costs for farmers. Mustafa promised that an LDK government would install a system that would offer tax-free petrol to farmers depending on their land holdings.

“Every farmer going to the petrol station will have an app demonstrating the amount of petrol he can buy without excise,” he said.

An invitation to this debate was also extended to the Democratic Party of Kosovo, PDK, but was declined due to a dispute with the broadcaster. The Social Democratic Initiative, NISMA, also received an invitation, but the party’s representative failed to attend.