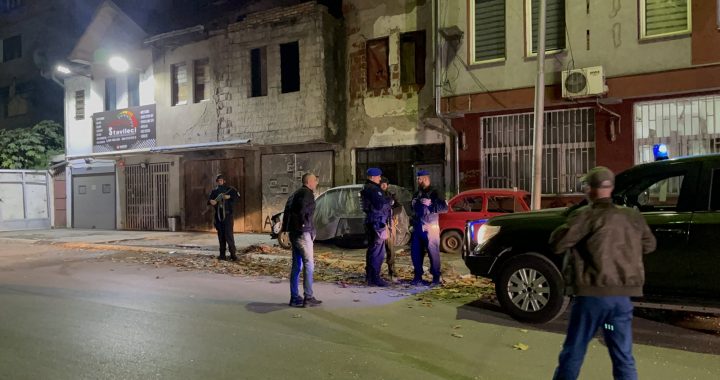 Explosions rock north of Kosovo only days before extraordinary local elections are due to take place in the four Serb-majority municipalities.

Gunshots and explosions were heard on Tuesday afternoon in the northern municipalities of Zubin Potok and North Mitrovica. Police said no injuries had been reported.

The offices of the Central Election Commission, CEC, and members of the Police were attacked only days before local elections in the four northern municipalities were due to be held on December 18.

They come after the mass resignations of Serbian officials in the North in a protest against the government decision to outlaw Serbia-issued vehicle license plates.

The Minister of Interior, Xhelal Svecla, said municipal election offices and police were attacked with “shock bombs” and that shots were fired in the air by organized groups.

The Minister added that such attacks, aimed at blocking the electoral process, are unacceptable.

“Organized groups with some masked individuals attacked Municipal Election Officers and police officers with bombs and shots in the air, to stop them from exercising their official duties. Attacks such as this, with the aim of blocking the electoral process, are unacceptable. The organization of elections is a constitutional obligation, while participation in them is a right of citizens that cannot be violated by anyone,” he said.

Svecla announced that Police had started investigations to identify and bring to justice the suspects.

Police announced that on the afternoon of Tuesday, several incidents were recorded in Zubin Potok and North Mitrovica.

They said Yugoslav-made hand grenades were also used in the damage to the CEC offices in North Mitrovica.

“Damage to the offices of the CEC was done by masked, violent, suspected persons/groups who used dangerous weapons, including Yugoslav-made hand grenades,” the Police announced.

The chairman of the CEC, Kreshnik Radoniqi, said that it would be unsafe to send CEC officials to the North right now.

“As I see, under these conditions we cannot work according to our plan … It is unfair to ask our officials to be sent to a place where there is uncertainty,” said Radoniqi.

President Vjosa Osmani said the situation in the North was escalating due to “criminal gangs supported by the Serbian President, Aleksandar Vucic”.

“Unfortunately, as in previous cases, the situation in the North escalates for one reason only, because criminal gangs in the North, supported by Vučić politically and financially, aim to escalate the situation, destabilize the whole of Kosovo and consequently,. destabilize the Western Balkans and thus realize the Russian-Serbian agenda,”  said Osmani.

December 18 is the official date for the extraordinary local elections for the four municipalities of North Mitrovica, Leposaviç, Zubin Potok and Zveçan.

Srpska Lista, the party of the resigned mayors in the North,  has said it will not participate in the elections.

“Serbian List will not take part in these elections, nor will the citizens who support our party, who are over 95 per cent in these areas,” it announced.

The holding of elections in the North is also in doubt because the only Serbian candidate for the extraordinary elections in North Mitrovica, Aleksandar Arsenijevic, has withdrawn.

The spokesperson of the Central Election Commission, Valmir Elezim, told BIRN: “On December 2, 2022, within the legal deadline set by the CEC for the withdrawal of political subjects, we received notification of the withdrawal of the candidate of the Civic Initiative ‘Srpski Opstana’”, Aleksandar Arsenijevic, from the race for mayor in North Mitrovica,” said Elezi.

He added that, according to the written reasoning, Arsenijevic withdrew of his own free will.

The resignation of the four Northern mayors followed the suspension of Nenad Djuric as director of Police for the North.

He was suspended after refusing to issue reprimands to owners of cars with illegal Serbia-issued license plates.

Serbian officials withdrew from state institutions of Kosovo, as did Serbian List deputies in the Assembly of Kosovo.