A photo that conveys resistance in the midst of violence is now a sculpture in the middle of Prishtina. The historic moment of protester Faik Rexhepi, caught in the photographer’s eye, is described by its author, Hazir Reka.

Pictures can sometimes replace words. Different languages often do not have the ability to convey a message and emotion all over the world, as sometimes a single picture caught by the photographer’s eye can.

Eyes full of resistance, arms that manifest resistance and legs that convey perseverance in the middle of violence in a forbidden era – these are just some of the reasons why Faik Rexhepi’s photo near the Grand in Prishtina has remained a picture stored in the collective memory.

It was August 30, 1990, when photographer Hazir Reka caught the rare moment, the right person at the right angle to send a message to the world – the perseverance of freedom.

In an interview with BIRN, Reka says the photo of Faik Rexhepi remains his favorite, because of the resistance he conveys.

On November 28 this year, the photo was revitalized in sculpture on Zahir Pajaziti Square, near the place where Presevar Faik Rexhepi had sent a message of resistance to the world. 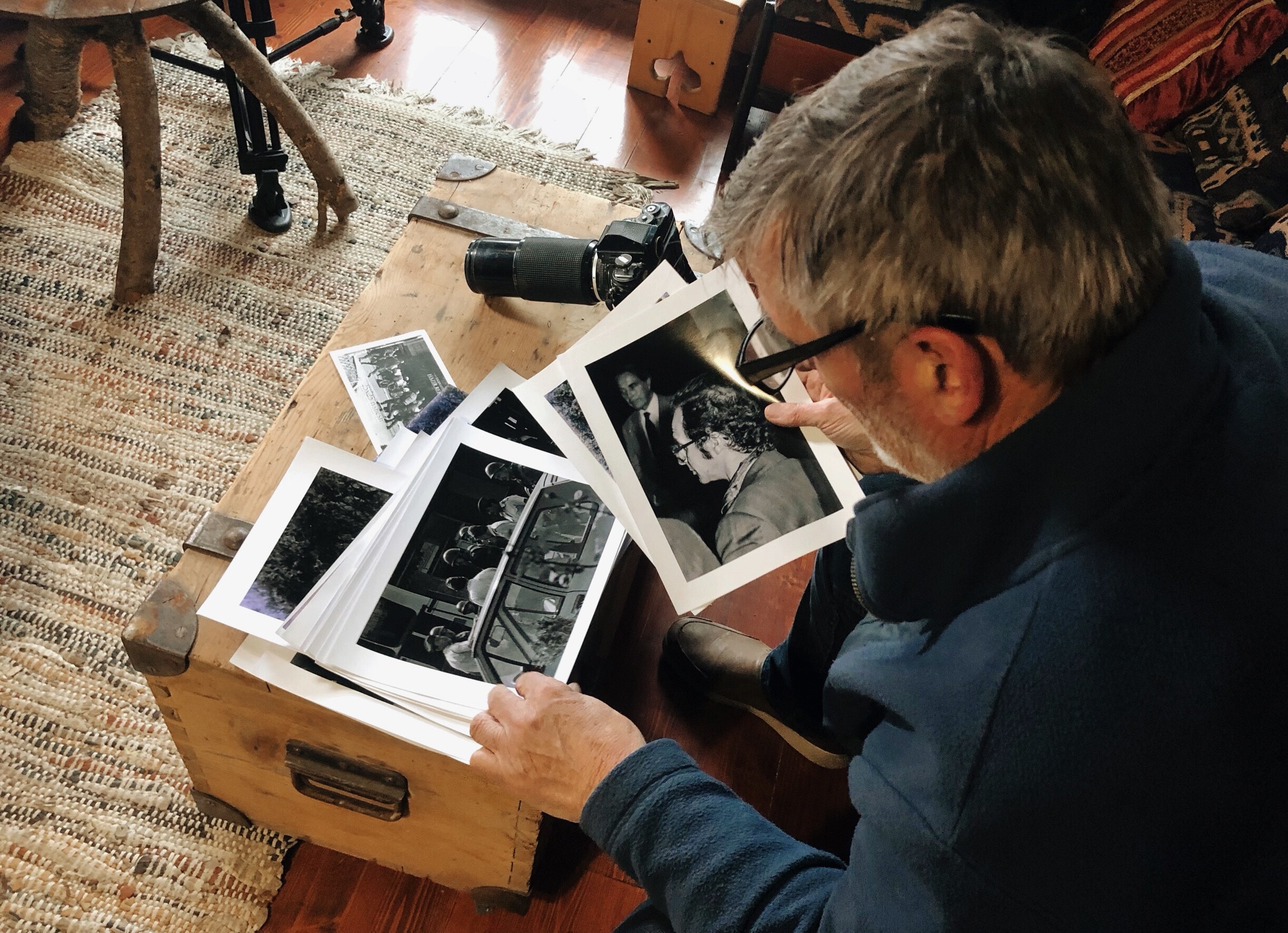 Photograph worth a thousand words

Reka’s story about this photo is much longer than the moment of the shooting. Although 32 years have passed since then, he recalls with details and emotion every action of Rexhepi who became the protagonist of his photograph.

Hundreds of people waving US flags on August 30, 1990, had come out to welcome US Senator Bob Dole and other officials to Prishtina.

According to Reka, it was the first time that such an important visit had taken place in Kosovo.

The team of Albanians meeting the American delegation was led by Kosovo’s later President, Ibrahim Rugova.

Reka said the Serbian police tried to disperse the demonstrators to empty the square but encountered resistance from Albanians when the US Congressmen arrived.

“Meanwhile, when uncle Faik came and sat there, cross-legged, he caught the people around his pants and forced them to sit on the ground. It seems to me there was an idea for the protesters to sit in the square. But there were so many police officers, and they were very violent – but uncle Faik was actually sitting and not moving while the police intervened,” the photojournalist says.

At that moment, the photographer had been positioned between the police and the crowd when he heard the police chief intervene.

According to him, at that moment, he managed to change the objective and place him in the framework. Faik Rexhepi did not move from his place and Reka shot the whole event when the police attacked the crowd.

None of the other photographers were able to shoot this photo, so he focused on Rexhepi’s position.

“Every policeman who passed there hit Faik and continued to disperse the crowd. But the demonstrations continued very violently because the police stepped on people’s heads with their boots. Faik did not move from his place,” the photographer recalls with emotion.

The story did not finish there. The resistance continued. A series of photos by Reka show the police pulling Faik Rexhepi on both arms, to get him into a police station.

“In the meantime, a woman with a little girl passed through and went to uncle Faik and started to argue with the police. She said, loudly: ‘He is not doing anything to you, why are you taking him?’ Police pulled Faik on one side and the woman with the little girl pulled him from the other. At some point, one of the policemen cursed in Serbian and said to the rest of them” ‘Let him go,’” Reka continued.

That woman became the reason why Faik did not get arrested that day.

The photographer later realized that she was a handball player from Ferizaj, living in Belgium, who had not known Rexhepi but had only expressed her wish to help. 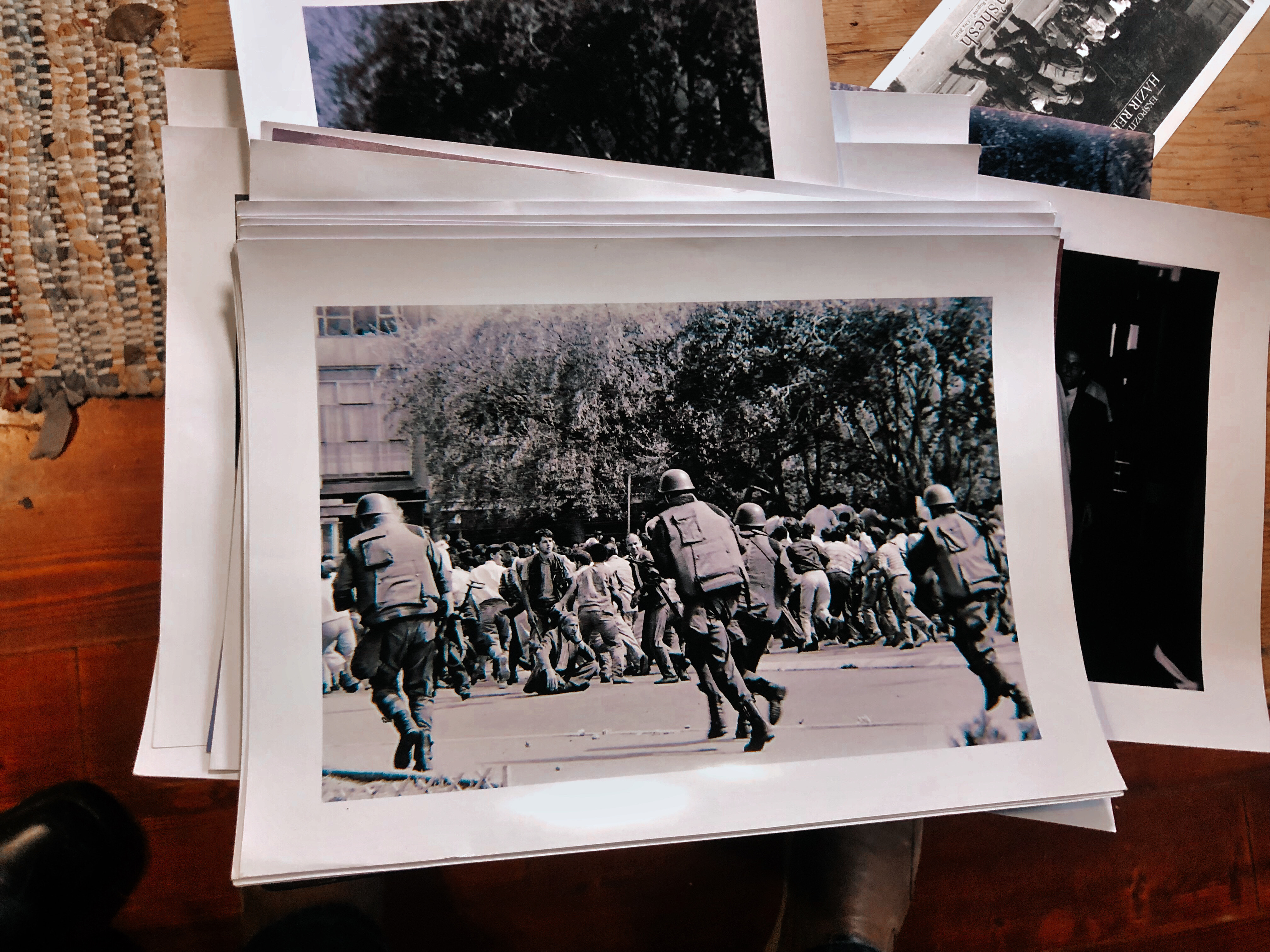 Dole wanted the picture in his office

The entire shoot of August 30 was at risk of being deleted by Serbian police. Fortunately, the photographer managed to send all the material he had shot all day from 9am to 5pm.

The next day, Rexhepi’s photo was on the front page of Zëri. The same photo was by then in demand from world news agencies. The photo had spread to the world.

In 1992, on a delegation to the US, where Reka met national activist Adem Demaçi and US Senator Dole, Reka gave this photo to Dole.

At this meeting, Reka had taken all the pictures he had shot that day and the documents of the Human Rights Council on the situation in Kosovo, the institution where he had worked.

“When we went to the meeting with Bob Dole there was a Croatian in his office. We went to the hallway and told her I’d worked on the daily Start of Croatia. I told her that I had the exhibition with me from when Dole was in Prishtina. I told her I wanted to give him the photo of Faik Rexhepi,” Reka said.

“She told me that when we go inside, when Adem Demaçi speaks to him, and the part comes us about when he was in Kosovo, present the picture. It happened like that. He took the picture because he knew the scene and the event. He told the Croatian that this photograph has a place here [in his office],”the photographer recalled.

Reka has exhibited this photo in exhibitions around the world. In 2020, he again photographed Rexhepi in the same place and in the same position, without police and violence around him, but with happy faces, in freedom. 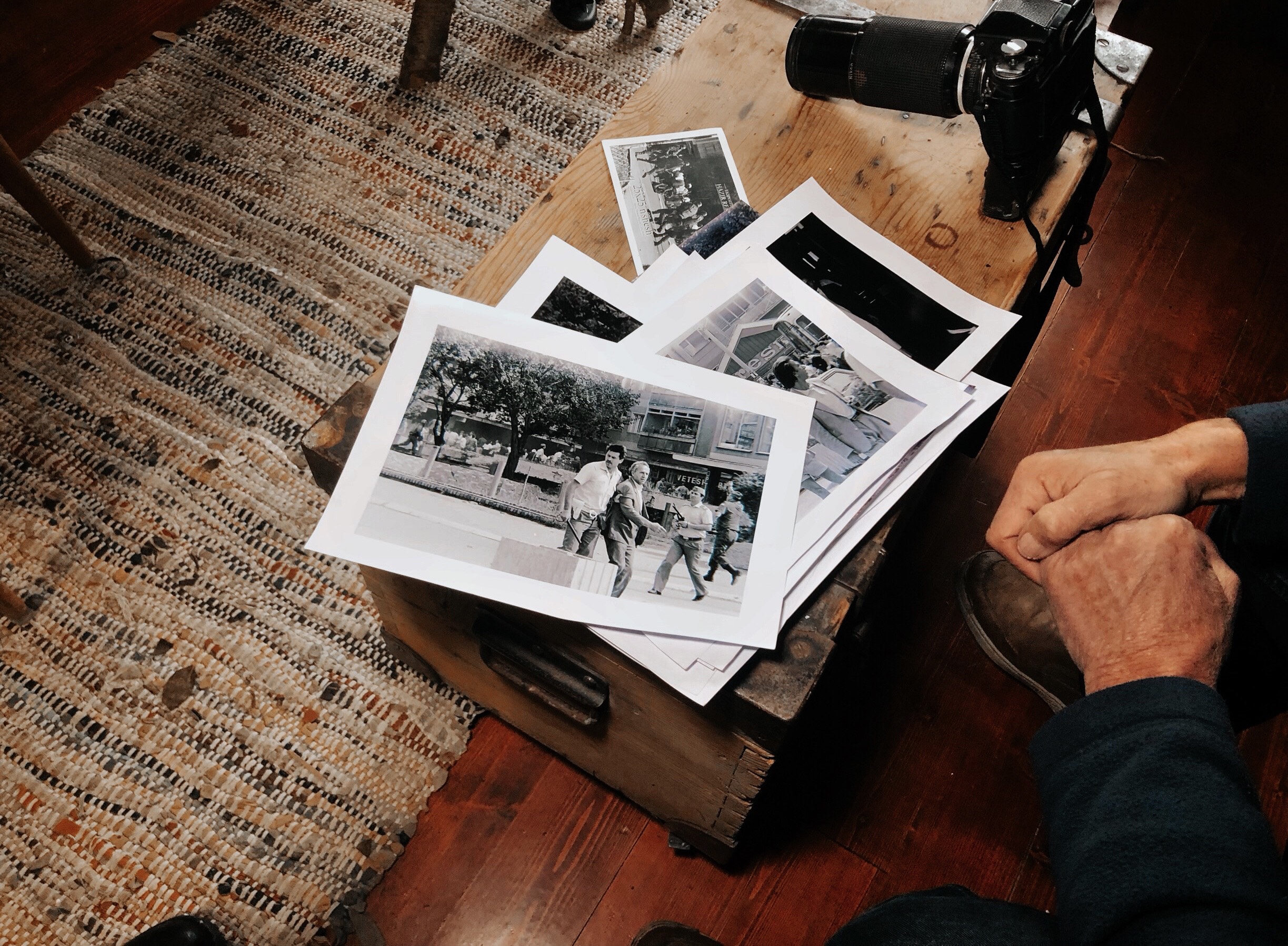 On November 28, the iconic photo was carved on the “cross-legged” sculpture at Zahir Pajaziti Square in Prishtina.

Reka says what would be most ideal would be for the sculpture to be placed by some surrounding police officers, with a plaque informing people who, when and why that figure was in that place.

Among the few sculptures that are not of central figures, 20-year-old artist from Mitrovica designed and worked on the sculpture of Faik Rexhepi, based on photography. The project was supported by the Municipality of Prishtina.

The photographer says he wanted such a sculpture to be placed in the square for February 17, Kosovo Independence Day, because it is so related to the history of Kosovo. 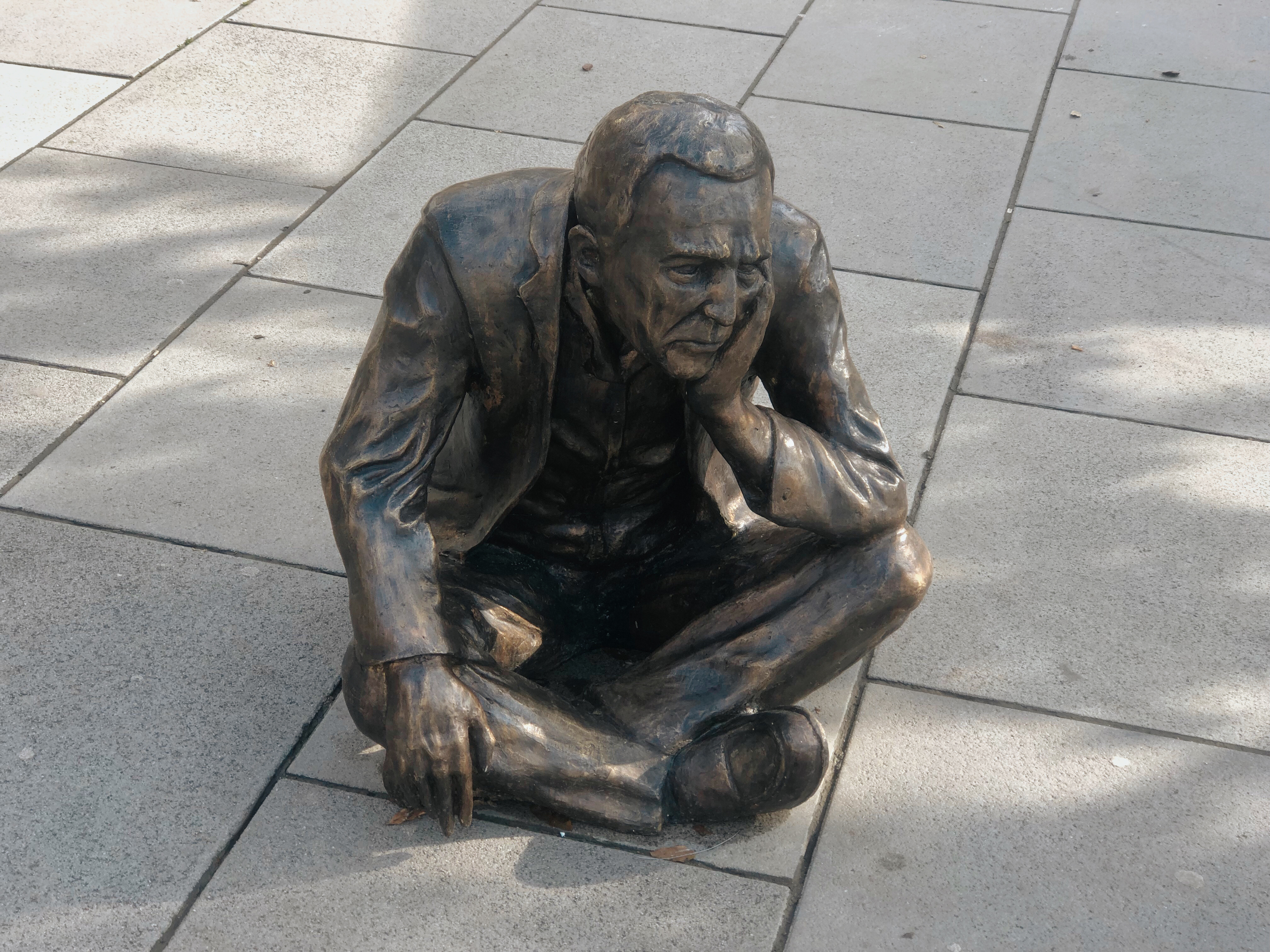 But he is also dissatisfied with how the sculpture was realized and says he was only notified by the Director of Culture in the Municipality of Prishtina just three days before it was inaugurated in the square.

“When the artist’s brother sent me a photo of the sculpture, before it was placed from that corner, it was not bad; I had the same experience with Bill Clinton’s bust in Podujevë. The realization there was good, but when it comes to the outside space, it does not seem like a good realization,” he says.

The sculpture has been welcomed as a unique idea, but also criticized for its realization.

by Antigonë Isufi
Next: Opinion