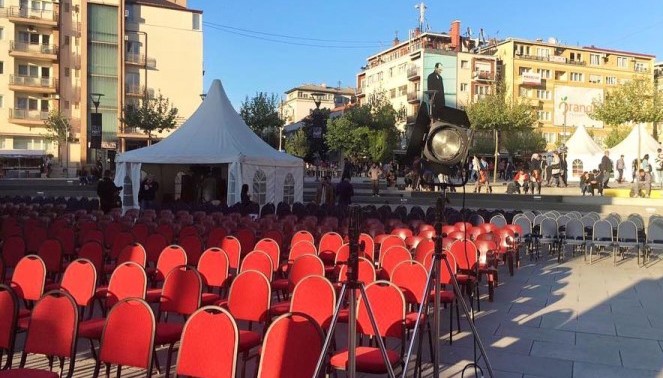 Representatives of two of Kosovo’s biggest film festivals, PriFest and Anibar, have announced their decision to reschedule the physical editions of the festivals to August in response to the spike in reported cases of coronavirus.

PriFest, the Prishtina International Film Festival, announced on Wednesday that it has postponed the physical edition of the festival from 14-19 July until 27-30 August, due to the “drastic increase in the number of cases of COVID-19, especially in Prishtina‬.”

In May, the Kosovo Cinematography Centre, KCC, along with the directors of the three main film festivals held over the summer in Kosovo – Anibar, PriFest and Dokufest – announced that plans were in place to move ahead with the events during their usual annual time slot.

PrifFest representatives stated in May that they were striving to ensure the festival would go ahead in July because of the importance of preserving cultural activities in the wake of the pandemic. The festival’s film schedule was originally adapted to be screened using open air cinemas in line with social distancing recommendations in order for the festival to safely go ahead as normal.

However, the recent surge in confirmed cases of coronavirus led to the decision to postpone. “The very discouraging news that the pandemic has begun to spread greatly made us decide to postpone the date of the festival, as we must be careful not to endanger the wellbeing of citizens in any way,” a press release distributed on Wednesday stated. Since Monday, 347 persons have tested positive for coronavirus.

A series of workshops and discussions connecting Kosovo filmmakers with the regional film industry, will still take place virtually through the festival’s PriForum platform during its originally scheduled time slot between 17-19 July.

The Peja-based Anibar international animation festival has also announced that its 11th edition, originally scheduled to be held over the third week of July, will now take place with an adapted format from 17-23 August.

“This year, Anibar will offer a programme tailored to the protective parameters set by relevant institutions in Kosovo for protection from COVID-19,” a press release published by Anibar on Thursday stated.

While the festival will be going ahead with its film screenings, presentations, special programs, educational and professional activities, the press release stated, the festival intends all of these activities and other artistic programmes to also be broadcast across Anibar’s digital platforms.

So far, Dokufest’s programme appears to be going ahead as scheduled, with the Prizren-based documentary film festival still set to take place between 7-15 August.