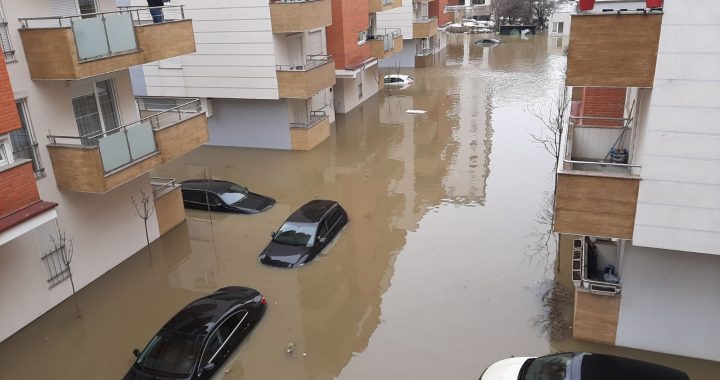 The town of Fushe Kosove on January 11. Photo: BIRN.

After heavy rain and snow over the weekend, cities and villages across Kosovo are experiencing floods, with emergency teams and the Kosovo Security Force deployed to assist citizens affected.

Heavy rain and snow over the weekend has caused disruptions across the country, with many cities and villages experiencing chaos caused by floods on Monday morning.

In Fushe Kosove, the road connecting the municipality with Prishtina was submerged underwater, with flooding causing damage to shops, cars and apartment buildings. Rescue teams were deployed Monday morning to evacuate residents from the buildings affected in the municipality.

In Drenas in central Kosovo, BIRN reported that citizens were facing power cuts and a lack of drinking water following the floods. Meanwhile, flooding in eastern Kosovo has caused disruption to the water supply from the Perlepnica reservoir, as water treatment has been rendered impossible.

In a press release on Monday morning, acting prime minister Avdullah Hoti stated that the government was ready to respond to the floods. Hoti added that he is in permanent contact with the Agency for Emergency Management, the Kosovo Security Force, KSF, and KFOR, all of which have expressed readiness to intervene if needed.

Ejup Maqedonci from the Emergency Department of KSF told BIRN on Monday that KSF emergency teams have already been deployed for operations in the field.

“In Drenas we rescued three persons near the Guri Zi river,” he said. “The Western zone of Kosovo is the most affected: Gjakova, Klina and Malisheva, and in fact the hydro meteorological forecast foresaw that in these zones there would be floods.”

On Friday, major flooding in western Kosovo saw the KSF evacuate 70 persons from the village of Brekoc near Gjakova, while in the Municipality of Klina a road was washed away following the heavy rains.

Writing for BIRN on Saturday, Nora Simitciu, a Kosovo based ecologist, blamed the level of damages on a lack of preparation by Kosovo’s institutions.

“It is urgent that the government, municipalities, environmentalists and urban planners cooperate in creating an infrastructure that prevents urban floods and avoid consequences that can be long-term, and sometimes even irreversible,” she said.