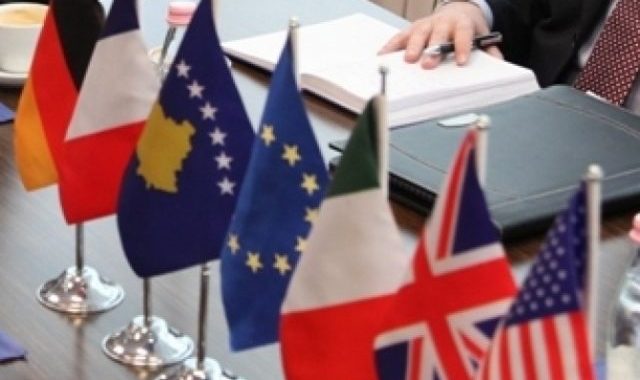 Foreign embassies get involved in wrapping up govt deal

After Monday’s meeting between Vetevendosje and LDK representatives again failed to produce a coalition agreement, the parties agreed that diplomats and the EU head of Mission would join a follow up meeting on Tuesday.

A meeting at the Kosovo Assembly on Monday between representatives from Vetevendosje and the Democratic League of Kosovo, LDK, once again ended with the two parties failing to reach a final agreement over the formation of a coalition government.

According to a statement released on Vetevendosje’s Facebook page on Monday evening, another meeting will be held on Tuesday at 17:00 involving the ambassadors of the Quint member states (the UK, the US, Germany, France and Italy), as well as the EU Office in Kosovo’s Head of Mission, Nataliya Apostolova.

“This afternoon, a meeting between the [Vetevendosje] and LDK was held in the Assembly of Kosovo. No agreement was reached,” Vetevendosje’s statement reads. “The parties agreed to hold another meeting tomorrow with Quint ambassadors in Prishtina as well as with the EU Head of Mission.”

On Monday night, Agim Veliu, Deputy President of LDK told television channel T7 that it was Vetevendosje’s request to hold a joint meeting with the Quint group.

Despite certification of the final results of the October 6 elections in late November, breakdowns in talks between Vetevendosje and LDK have stalled the finalization of a governing deal between the two parties.

A letter sent by Vetevendosje to Kosovo President Hashim Thaci on Monday, January 20, confirmed party leader Albin Kurti as Vetevendosje’s nomination for the position of prime minister. The nomination triggered a 15-day deadline for Kurti to present a cabinet to the Assembly, who must be approved by a majority vote to be elected, which expires on February 4.

In a statement after Monday’s meeting, LDK confirmed that the party did not present any new deals or proposals at the meeting, repeating that its positions are “already known to the public.”

“We consider that the positions taken are balanced for both parties and serve the stability of the country’s governance,” LDK’s statement read.

LDK has insisted that the position of Speaker of the Assembly should be returned to an LDK representative. Vetevendosje’s Glauk Konjufca was voted in as Speaker on December 26, 2019, including by LDK MPs, despite agreements reached in principle between the parties after the October 6 elections that an LDK official would hold the position. Vetevendosje has repeatedly rejected LDK’s request, stating that they consider the election of Konjufca as speaker as “irreversible.”

Vetevendosje and LDK have also publicly clashed over the appointment of Kosovo’s next president, who will be elected by the Kosovo Assembly in Spring 2021. LDK has insisted that the party with the power to nominate the president be included as part of LDK and Vetevendosje’s governing agreement, while Vetevendosje has insisted that nomination of the president is not a pressing issue, and is one to be discussed at a later stage.

Almost every Quint state has refrained from making public statements while the two parties have attempted to reach a deal for the next coalition government. Only the British Embassy publicly reacted to Kurti’s nomination as prime minister last Monday, stating that Kosovo’s voters and their desire for change deserves to be respected.

“Kosovo’s elected politicians and their parties now need to show courage and creativity in forming a government that reflects the wishes of the electorate,” the statement reads. “We call for rapid progress in negotiations, in a spirit of tolerance and partnership.”