When Edon Muhaxheri’s handbuilt writing automaton started scribbling last spring, no one had seen the curved letters of Vithkuqi, a long-lost Albanian alphabet, in over two centuries. This was Muhaxheri’s MFA thesis presentation in Baltimore, which he used to transform a forgotten alphabet into a stripped-down, modern type.

There was no consensus on a common Albanian alphabet until the 20th century, but original alphabets were created as early as the mid-18th century, the first-known being the Elbasan Gospel Manuscript of 1761.

In 1844, lawyer and patriotic scholar Naum Bredhi invented a 33-letter alphabet and printed it into an Albanian spelling book. The alphabet, named Vithkuqi after a village in Korce, was designed to be religiously neutral and was received enthusiastically throughout southern Albania. However, it never became widely used, partially because its creator’s untimely death.

Muhaxheri recently completed his MFA in Illustration Practice, with a Fulbright scholarship, at the Maryland Institute College of Art, MICA. Last year, we met in a dimly lit Baltimore watering-hole and discussed his work over drinks with friends. He mentioned his thesis, but did not mention the alphabet project.

In fact, he told me recently in an interview for Prishtina Insight, except for a few close confidants, he didn’t clue anyone in on what he was working on.

He even invited Vlora Citaku, Kosovo’s Ambassador to the United States, to his exhibition opening in April without letting her in on the surprise, explaining only that he would be “revealing a long lost cultural heritage gem.”

“Besiana, a diplomat at the Embassy​ ​on the other side of the phone, was feeling my excitement but kept asking me for more info. She said, ‘You know I can’t ask our Ambassador to travel all the way to Baltimore without even knowing why?’” She attended anyway.

In the process of learning how to interpret an illustration in tangible real-life 3D, I found a new passion.

Citaku and others from the diplomatic community have supported Muhaxheri’s project as an important cultural heritage initiative. The American design community has also taken interest in his work, not only for its typography component but also its exploration of automata.

Muhaxheri’s interest in self-operating machines bloomed when his Illustration Practice professor encouraged him to do something experimental for MICA’s annual art market when he was a first-year student.

“I decided to take my illustration practice off paper and off the screen. I decided to make a toy: a rotating carousel, with little baby blue and pink horses,” Muhaxheri said. He spent days researching mechanical toys, designing and testing the product, and after three sleepless nights, finally created 25 toys with 36 assembling pieces each.

“In the process of learning how to interpret an illustration in tangible real-life 3D, I found a new passion.”

Seeing his interest in creating more automata, a friend spoke to him about the historical adventure drama Hugo, which revolves around complex human-like automata. Muhaxheri became especially fascinated with the writing automata in the film.

“These humanoid mechanisms were the peak of European automata artistry in the 1800s. I wanted my automaton to write something from that period of time, in Albanian,” he exclaimed.

Though he was uncertain about his abilities to see such a project through, his professor pushed him towards it. He began his research, and found an image of Naum Bredhi’s original Albanian alphabet from 1844, inside German scholar Karl Fraulmann’s book Das Buch Der Schrift.

“There were few—almost no—resources on the topic. There was this vague information that said something about Bredhi writing Ëvetari, the first Albanian ABC book, in his own alphabet.”

He bought Fraulmann’s book right away, but it contained no information about Bredhi except for the scan from Ëvetari. Muhaxheri then turned to the writings of historian Robert Elsie. He learned that other scholars on Albanian history and literature had written on Naum Bredhi, such as Gjystina Cacaj Shushka, but their actual publications were “nowhere to be found.” 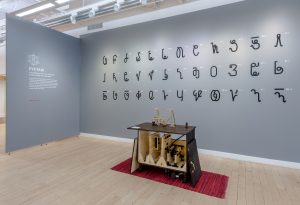 Muhaxheri then thought to contact the National Museum of Education in Korca, Naum Bredhi’s birthplace.

“The museum director Niko Kotherja really appreciated that someone wanted to study Naum’s work. He offered to scan an original copy of Ëvetari for me. I got really really emotional when I received it. I couldn’t believe my eyes,” Muhaxheri recollected.

He became enthralled with this old alphabet. He knew he wanted to share it, but as an artist, wanted to “give it the treatment it deserved.” He revived the alphabet by studying its typographic elements and designing three new letters. He then digitized it into a font for regular use.

In an interview with Graphic Design USA, a journalist termed his work “Albanian Helvetica.”

I took Naum’s symbols and simplified them as much as I could, without stripping them of their identity.

“I said, ‘exactly!’ Basically what it means is that I took Naum’s symbols and simplified them as much as I could, without stripping them of their identity.”

On top of taking a teaching position at MICA, he is now preparing to release the font on December 6th, to celebrate Naum Bredhi’s 220th birthday, along with a book on his study of the Vithkuqi alphabet accompanied by historical research on alphabets in the Balkans.

He is also preparing his writing automaton for shows to be held in Kosovo and Albania, and to have it permanently displayed at the Museum of Education in Korca.

Muhaxheri hopes his efforts will revive Vithkuqi for a modern audience. With his inbox filling with letters of support, and requests to use the alphabet for tattoos, he feels like this is becoming a reality.

“All those sleepless nights are paying off,” he said.

Kosovo observes Day of the Disappeared

by Ardit Kika
Next: Big Deal