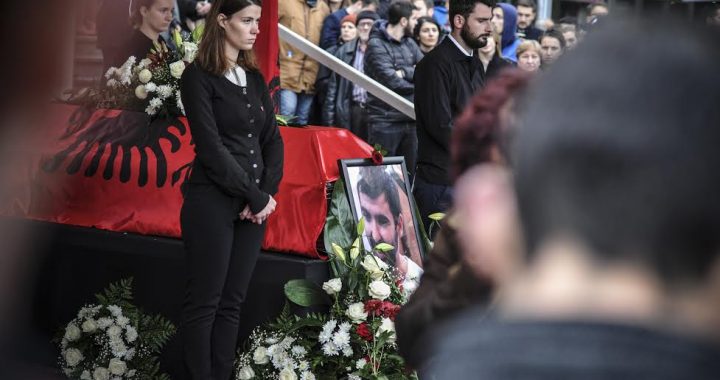 Four suspended regarding death of opposition activist in custody

Four prison officials have been suspended as a result of Dehari’s death, but the victim’s family insists on the resignation of two ministers before any independent investigation.

On November 22, the Ministry of Justice issued a press release stating that four officials from the Prizren detainment center, where Vetevendosje activist Astrit Dehari died on November 5, have been suspended for neglect.

“The [Ministry of Justice] Inspectorate during the inspection did not find that any action of the institution was the instigator or the cause of the death of A.D. in any way, even though some procedural neglects were identified,” said the Office for Public Communication in the Ministry of Justice.

“As a result of these neglects, disciplinary procedures against one correction official, two supervisors, and the acting director have been initiated, the respective people have been suspended.”

An autopsy report released on Friday by the Institute of Legal Medicine stated that the cause of Dehari’s death was self-inflicted asphyxiation. However, Dehari’s family, civil society, the opposition party Vetevendosje, and common citizens have called for an independent investigation into the matter.

On November 14, Minister of Justice Dhurata Hoxha sent a request to the British Embassy in Kosovo to invite Scotland Yard, a police unit in Britain, to investigate Dehari’s death.

However, Dehari’s parents, Avni and Xhemile Dehari, issued a statement against the minister’s request, complaining they were not consulted.

On Tuesday, the British Embassy refused the request, reported KTV.

“We understand the sensitivity and the circumstances of the tragic death of Dehari. Every death in detainment deserves a careful investigation. Thus, considering that this case has no direct relation to Britain, it would be inappropriate that the British police gets involved,” the Embassy said.

The Dehari family also demanded the resignation of the Dhurata Hoxha and Minister for Internal Affairs Skender Hyseni, and called for the termination of current investigations led by local prosecutors.

“The current investigations, led by prosecutors Metush Biraj and Syle Hoxha, must cease. From the latest publications we have found out that these two prosecutors have a conflict of interest with the brother of the chief prosecutor, Elez Hoxha, sentenced to four years in jail for corruption,” said the statement.

The family referred to contradictory statements from the Kosovo Police immediately after Dehari’s death.

Dehari was one of the six Vetevendosje activists suspected to have attacked the Kosovo Assembly building earlier this year. Dehari spent 68 days in custody on suspicion of terrorism, although no charges were brought against him.