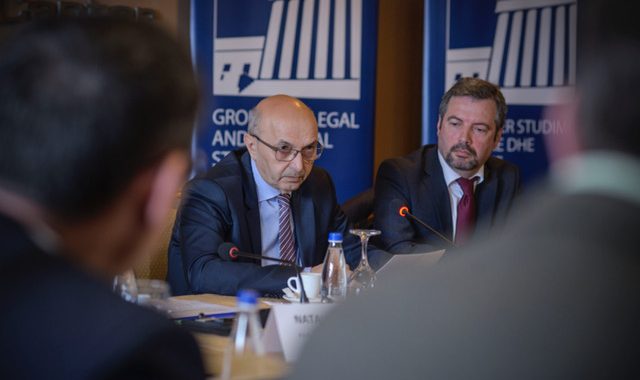 PM Mustafa and Bajrami at GLPS roundtable. | Photo: Office of the Kosovo PM.

The EU should share responsibilities to implement and clarify agreements reached between Kosovo and Serbia in Brussels, a new policy note argues.

In 2017, we are still discussing how to implement agreements reached in Brussels years ago, Kosovo Prime Minister Isa Mustafa wistfully remarked during a roundtable discussion marking the fourth anniversary of the 2013 Brussels Agreement.

“We need to better explain to the public the procedures for implementation of the agreements… We need support and understanding, and it’s true that we need to be more open in this dialogue process,” PM Mustafa said.

The Agreement, or the “First agreement on the principles governing the normalization of relations,” reached between Kosovo and Serbia in a dialogue facilitated by the European Union, called for the dismantling and integration of Serbian parallel structures in Kosovo and the establishment of an Association/Community of Serb-majority Municipalities.

Serbia and Kosovo have since been in conflict over interpretations of how the Association should function, explained Agron Bajrami, Koha Ditore Editor-in-Chief and writer of the GLPS policy note launched today.

The policy note titled  “Four years after the April agreement: How effective is the political dialogue between Kosovo and Serbia?” argues that despite the international support for the dialogue, the parties remain in political deadlock because the EU has not taken a more hands-on role in clarifying and implementing the agreements.

The “international push” for the dialogue and for implementation of the agreements reached,  Bajrami said, follows “rising tensions” after a wall was constructed in northern Mitrovica and a ‘provocative’ train traveling from Serbia was stopped from entering Kosovo.

The calls for the continuation of dialogue increased in early March when Kosovo MPs voted to suspend the dialogue until opposition leader Ramush Haradinaj, who was arrested in Colmar in January on a Serbian warrant, is released.

“But, the reality of the dialogue remains the same as it was before the recent Kosovo-Serbia confrontations: there’s simply no agreement on what the Association should look like… for four years now, dialogue in Brussels could not find a way to overcome this impasse,” Bajrami’s note states.

A major impediment for the implementation of the Brussels Agreement, he argues, is the lack of transparency and consensus about what is actually discussed in the EU-facilitated talks.

“The EU should be a mediator, not a facilitator… the facilitator’s role that the EU has undertaken has to include the role of the supreme interpreter of the reached agreements,” said Bajrami during the roundtable.

The Head of the EU Office in Kosovo, Nataliya Apostolova, responded that such a change in the EU’s role would require an agreement between Kosovo and Serbia.

“Kosovo and Serbia determine what will be discussed, what is agreed, and how it will be implemented…. We guide the process and work with both parties at different levels… But we do not have decision-making power,” Apostolova said. “Different views on the way [the dialogue] is conducted [are acceptable]. We have to look at how the dialogue is communicated and the results that are achieved. But it should be the common view and understanding that it is the most important political process in the region, and it has no alternative.”

PM Mustafa admitted that the implementation plan for the Association agreement needs more input from opposition parties and from civil society.

He focused, however, on a list of accomplishments resulting from the EU-brokered talks, including the functioning of Kosovo customs and police in the north and integration of civil protection and the justice system.
“We inherited problems from Serbia that we cannot solve in any other way than the dialogue with Serbia,” Mustafa said.