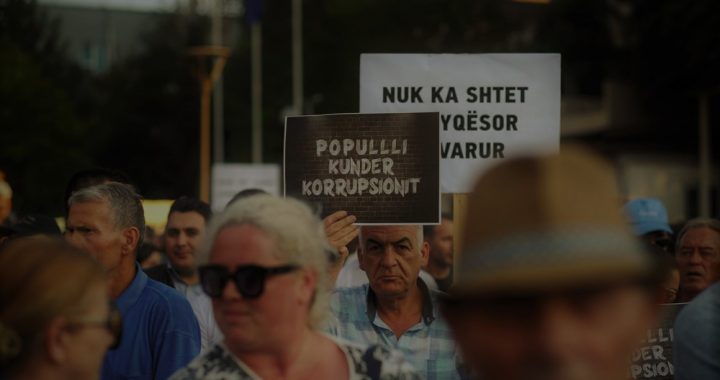 The PAN coalition parties may be about to leave power, but the DNA of their government will remain in key state institutions for years to come due to a legacy of nepotistic appointments.

During the election campaign for the 2017 parliamentary elections, the PAN coalition (made up of the Democratic Party of Kosovo, PDK, the Alliance for the Future of Kosovo, AAK, and NISMA) printed the promise that “with us in government, each family will have one employee” on billboards across the country.

After PAN became the most voted subject at those elections, they formed the backbone of the new government, and their candidate for prime minister, Ramush Haradinaj, incorporated the promise into his governing plan.

The PAN-led government was promising social employment on a family basis, regardless of people’s ability to work. However, even this is perhaps the least significant problem with PAN’s record on employment.

According to data from the Kosovo Agency of Statistics, ASK, 357,608 persons were employed in June 2017, with ASK data also showing that there were 121,000 families without anyone in work, meaning the coalition was promising 121,000 new jobs.

In 2019, with outgoing Prime Minister Haradinaj having resigned and the country on the verge of extraordinary elections, ASK data reveal that 341,014 people are currently employed in Kosovo, 16,594 fewer than when PAN began governance.

The decline in the number of those employed would suggest a contraction of private sector employment, making public sector jobs more valuable than ever. Meanwhile, the electoral campaign promise of each family having one member employed was seemingly transformed into a commitment to find work for every member of the PAN family tree.

Around two months after the formation of the government, Prime Minister Haradinaj’s brother-in-law, Liridon Dervishaj, was employed as the head of the Kosovo Health Insurance Fund. In October 2018, the Prime Minister’s uncle, Lahi Brahimaj, was appointed as the head of the administration sector at the Food and Veterinary Agency, and in February 2019, his sister-in-law, Vesmira Haradinaj, was employed as a deputy finance director at Kosovo Telecom.

Indeed, Kosovo Telecom became a major employer for family members of the government. The wife of AAK MP Beke Berisha was appointed as the head of the Kosovo Telecom Board, while another member of the board, Osman Ejupi from NISMA, employed all four of his children in the company. Also finding work at Kosovo Telecom was the husband of AAK MP Donika Kadaj-Bujupi, both the wife and father-in-law of PDK MP Mergim Lushtaku, the sons of AAK MPs Muharrem Nitaj and Teuta Haxhiu, and Beke Berisha’s sister.

Positions in ministries also often ended up going to those related to officials from the PAN coalition. The grandson of the chairman of the NISMA National Council, Jakup Krasniqi, was appointed as oil inspector at the Ministry of Trade and Industry, MTI, the same ministry where NISMA leader Fatmir Limaj’s son is employed as a political advisor.

The Central Bank of Kosovo, BQK, one of the most important institutions in the country, was also not immune to employment being seemingly made on the basis of genealogy.

Prime Minister Haradinaj’s sister-in-law was employed at BQK; as was the husband of PDK MP Evgjeni Thaci-Dragusha, the sister of Health Minister Uran Ismaili (who is also PDK’s Vice President), and the daughter of former deputy minister Gjergj Dedaj, who is currently Kosovo’s Ambassador to Northern Macedonia.

With Kosovo Telecom on the verge of bankruptcy, another economic giant, the Kosovo Energy Corporation, KEK, also became filled with those with familial connections to the PAN coalition.

In October 2018, the cousin of President Thaci was selected as managing director of KEK, which paved the way for family employment throughout the corporation. Both Thaci’s nephew and a cousin of PDK leader Kadri Veseli found a job at the corporation, as did the son of Thaci’s advisor, Ismajl Syla.

While Thaci and his advisors’ connection to the PAN coalition should be separated in his role as president, his continual links to the party he formed, PDK, do not even require elaborating on.

It wasn’t only public institutions that were filled with relatives of PAN officials. Politics also meddled in the examination process for new public notaries. Of the 175 candidates that passed the exam in July 2019, many were identified as being close family members of leading politicians from the PAN coalition.

There are many more cases reported in the media, and there are most probably dozens of other cases of nepotism about which we have no idea. Often the justification for the employment of the family members is that they have the best evaluations – a type of genetic selection. It seems like intelligence and greatness is coded in the family members of the parties in power.

During these two years of PAN governance, the speed of institutional degradation and the politicization of institutions was clearly quicker than in previous governments. Institutions that should ensure financial stability, energy, telecommunications, airspace, and the judiciary are now completely managed by the PAN family.

In the upcoming weeks, the parties of the PAN coalition will once more pursue votes and promise employment, perhaps even repeating the slogan of employing one member from every family.

The former head of the PAN coalition, Kadri Veseli, whose party PDK is most to blame for the state capture after more than a decade in power, has already started the electoral campaign with a new slogan, ‘the New Decade’, stating that in the next mandate PDK will combat corruption and nepotism.

But even if Kosovo citizens have learnt nothing else from these two years of PAN governance, they must be able to grasp that the new promises are not for their families, but only for the families of politicians that have led Kosovo. With these kind of political parties, everyone sharing DNA with those in power will soon have a place in Kosovo’s institutions.

Last month, in a closed meeting in the Municipality of Prizren, now led by opposition party Vetevendosje, an official complained that: “we have the power here, but the system belongs to them,” a reference to PDK’s ongoing control over the municipality after ruling the second city for ten years.

Haradinaj’s outgoing government might not remain in power after the snap elections, but positions for those with familial connections to the PAN coalition have been ensured in Kosovo’s institutions. The whole system will stay in power for a long time to come.