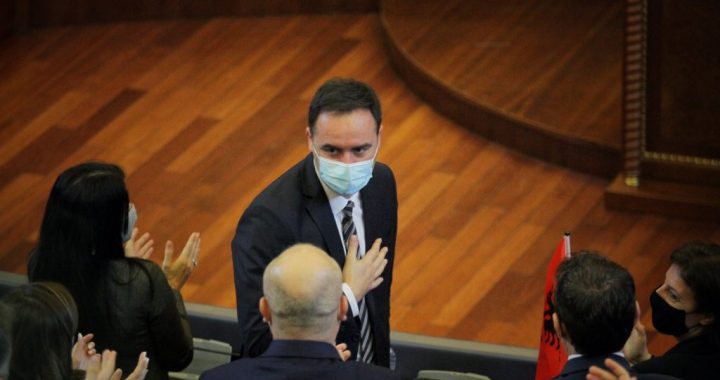 The new composition of the Kosovo Assembly held its first session on Monday, swearing in elected MPs and appointing Vetevendosje’s Glauk Konjufca as speaker.

On Monday, Kosovo’s eighth legislature was officially formed as newly elected MPs were sworn in at the Kosovo Assembly, beginning a four-year mandate. Speaker and deputy speakers of the Assembly were also elected, with Vetevendosje’s Glauk Konjufca appointed to lead the parliament.

Konjufca received 69 votes in favour from the 113 MPs present at the Assembly, with 33 votes against and no abstentions, after being nominated for the position of speaker by Vetevendosje MP Adnan Rrustemi.

Addressing the new Assembly, Konjufca thanked MPs for their vote. “I pledge that I will commit to this duty with responsibility and honour,” he said. “Above all, we should thank the people of Kosovo, because without them we would not come here and be able to vote.”

Konjufca will be served by five deputy speakers, including Saranda Bogujevci of Vetevendosje, Bedri Hamza of PDK, and Kujtim Shala of LDK, who were elected with 107 votes in favour.

According to the Constitution, the Assembly now has 60 days to appoint a new government. However, sources within Vetevendosje have told BIRN that a parliamentary session electing Kosovo’s next government will take place as soon as possible and is likely to be held later on Monday.

The new parliament is dominated by MPs from Vetevendosje, after the party’s landslide victory in February’s parliamentary election saw them allocated 58 of the 120 seats in the Assembly. PDK are the second largest parliamentary party with 19 MPs, while LDK have 15 and AAK 8.

Vetevendosje have stated that they will not enter into a coalition with any other Kosovo Albanian party or the Belgrade-backed Srspka Lista, and will form a parliamentary majority through an agreement with MPs representing Kosovo’s non-Serb ethnic non-majority communities.

In his new role as Speaker of the Assembly, Konjufca now takes over as Kosovo’s acting president. Previous speaker Vjosa Osmani assumed the role of acting president in November following the resignation of Hashim Thaci, beginning a six-month mandate which expires on May 5.

Electing Kosovo’s next president will be the first task of the new government, and may prove complicated.

According to Kosovo’s Constitution, two thirds of MPs are required to take part in a presidential vote, meaning a united opposition could potentially prevent anyone being elected if they do not participate. If the Assembly fails to elect a president, yet more early elections would be triggered.

Osmani announced her desire to be given a full mandate as Kosovo president as part of Vetevendosje’s election campaign and looks set to be the first candidate presented to the Assembly.