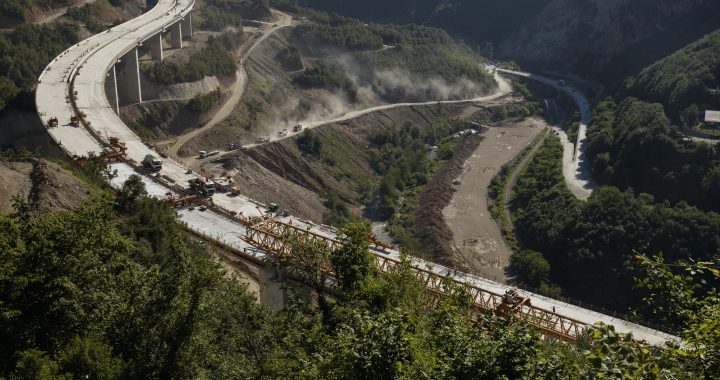 A view of the motorway 'Arben Xhaferi' near the town of Kacanik, Kosovo, 01 June 2018. The Motorway 'Arben Xhaferi' links the Kosovo's capital Pristina with the border of the The Former Yugoslav Republic of Macedonia at Han i Elezit, which is about 20 km from capital Skopje. The construction of the motorway is 60 km long, has a budget of 600 million euro, started in July 2014 and it is scheduled to be finished in late 2018. EPA-EFE/VALDRIN XHEMAJ

BIRN discovered that the Kosovo Special Prosecution is investigating government officials concerning the payment of 53 million euros to the company Bechtel Enka for the construction of the motorway connecting Kosovo with North Macedonia on Tuesday.

Following the payment of a fine worth 53.1 million euros by the Kosovo Government to American-Turkish construction company Bechtel Enka in June 2018 for the construction of the highway between Prishtina and Skopje, the Kosovo Special Prosecution revealed to BIRN on Tuesday that they have begun investigations into the decision to pay the company this extra fine.

“Investigations are underway and, until now, a considerable number of witness testimonies have been heard, and we are working intensively on this case,” reads a reply from the Kosovo Special Prosecution to BIRN.

In June 2018, outgoing Prime Minister Ramush Haradinaj said that the government needed to pay this financial penalty due to delays in payments, which was requested by the company in November 2017.

“After delays by the Government for payment of construction work performed by the contractor, the Government and the contractor were obliged to extend the deadline for completion of the construction, so the Haradinaj Government, on September 27, 2017, signed the annex contract for the completion of work to happen by December 21, 2018,” reads the memorandum that Infrastructure Minister Pal Lekaj sent to the Office of the Prime Minister on April 20 this year.

Bechtel-Enka won the bid to build the 60km highway from Prishtina to Skopje in February 2014, worth around 600 million euros, which was originally scheduled to open in early 2018. The highway was finally opened in May 2019.

Lekaj said following the opening of the highway that the Kosovo Government intended to fine Bechtel Enka around 12 million euros for the delays in construction between 2018 and 2019. However, no concrete steps have been taken in this regard.

The original contract for the highway’s construction was signed by the previous interim government of now-President Hashim Thaci on July 1, 2014, and works on the highway began a week later, on July 8. However, the planned budget, works and time frame agreed upon during Thaci’s government on the Kosovo-Macedonia highway did not line up.

Former Infrastructure Minister Lutfi Zharku began negotiations with Bechtel Enka in 2017, striving to reach an agreement to change the agreed-upon workload and timeframe.

On September 27, 2017, new Infrastructure Minister Pal Lekaj signed an amendment to push the deadline for finishing works on the highway 347 extra days. It was agreed that the time frame of construction would be extended from January 18, 2018 to December 31, 2018.

A few days after taking office in September 2017, Haradinaj’s government signed the new annex contract with the company that cost the government another 53.1 million euros.

The current government accused its predecessor of negligence concerning the negotiations, but neither of them appealed to the state prosecutor to investigate the losses.

In July 2018, opposition party Vetevendosje demanded that the Government annul the decision to pay the fine. “The state should react and the Government should annul the decision. 53 million euros is of huge value for Kosovo, and with that much money could be done for the healthcare and education systems in Kosovo,” said Vetevendosje MP Liburn Aliu in a press conference.

The public still does not have access to the part of the contract in which the Kosovo government agreed to pay the fine for not fulfilling payment requests submitted by the construction companies in 2014, or the part that extended the completion date.

It was not until November 2017 that Minister Lekaj said during a televised debate that he received a request for 63 million euros from Bechtel Enka in relation to the fine. Later, the government boasted that they had managed to “salvage” 10 million euros, paying “only” 53 and not the 63 million that was initially requested.

Considering that the public does not have access to the contract for the highway, agreements about the financial plan for its construction and the penalties in case of delays remain unknown.