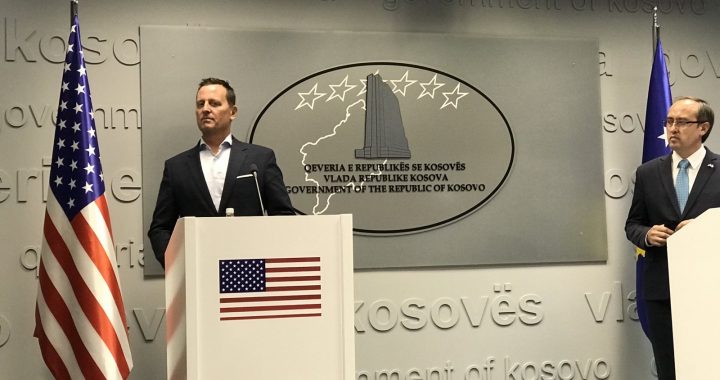 The US Special Envoy told BIRN on Monday that he was ‘grateful for all of President Trump’s words’ when questioned about the US President’s claim that his administration was ‘stopping mass killings between Kosovo and Serbia.’

In a whistle stop visit to Prishtina, US Special Envoy Richard Grenell called on Kosovars to support the economic normalisation agreements signed in Washington DC, describing them as an opportunity to “get past political fights.”

Grenell was part of a US delegation that signed a joint statement with Kosovo Prime Minister Avdullah Hoti on Monday night, which pledged to establish an investment incentive agreement between Kosovo and the United States.

“We don’t want empty words, we want to show the people of Kosovo that we stand with you and that we can move forward with economic development for the betterment of western civilisation,” Grenell told a press conference.

Grenell reiterated that he was instructed by US President Donald Trump to find an agreement between Kosovo and Serbia that was jobs based, rather than “the same old political discussions.”

“While symbolism is important, it can’t pay your rent, it can’t feed your family, it doesn’t give you a lot of hope,” Grenell said.

Asked by BIRN what President Trump had meant when he referred to his administration “stopping mass killings between Kosovo and Serbia,” Grenell stated that he was grateful for all of Trump’s words.

“What I think President Trump is saying is that he is committed to moving into economic normalisation for the two countries,” the envoy said. “We would not be here if it wasn’t for President Trump saying ‘Let’s do something different for the region.’”

“After this agreement was signed, again, the president told us: ‘Now go implement it!’,” Grenell continued. “These are not just words, he’s a very action-oriented president. So I’m grateful for all of his words and all of his commitments because they always push through, and bring with them economic action.”

The envoy stated that “loud political voices” had hijacked the debate on Kosovo and caused “economic strife.”

He added that he hoped citizens of Kosovo that aren’t political “speak up to say that this is a real opportunity to get past political fights and move towards job creation.”

Earlier in the evening, President Hashim Thaci awarded Grenell with a Presidential Medal of Merits “for his extraordinary contribution to reaching the economic normalisation agreements between Kosovo and Serbia at the White House.”

“What others couldn’t do, Mr. Grenell did quickly, well and accurately,” Thaci said.