Miran: Kunefe fit for a king 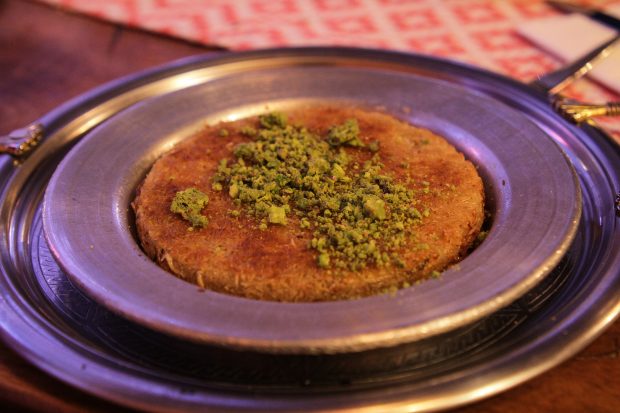 Miran, a new addition to Prishtina’s heaving cafe scene, stands out from the crowd by embracing innovation and importing sweet delicacies from further east.

Prishtina is not a city short on options for a place to meet for a coffee and a sweet indulgence. The capital’s macchiatos and cafe culture have been frequently documented in international media, now to the point of sometimes hilarious cliches.

Even a global pandemic has not deterred new spots from entering the busy scene, one of which is Miran, a new Turkish-inspired cafe on Rexhep Luci street in central Prishtina that opened in the summer of 2020.

Considering the current economic climate, it is fortunate that Miran’s co-owner Bajram, an architect by trade, says that he was looking for a challenge with his new enterprise. Even more fortunately, his staff, recruited from Turkey, are bringing something fresh to an often oversaturated industry.

Miran’s sweets menu mostly consists of a range of kunefe and kadaif, which, for the uninitiated, are Turkish takes on a traditional Middle Eastern dessert, kanafeh. Both utilise shredded filo pastry soaked in a sweet syrup, with kadaif shredding the pastry into long thin noodles, and kunefe using smaller strips to encase a soft white cheese.

At Miran, the kadaif is topped with crumbled pistachios which help balance the intense sweetness of the syrup-soaked pastry. All of the kunefe and kadaifs are also served with a glass of milk and small plates of fruit, which provide a useful palette cleanser and keep the dishes from moving to the wrong side of sickly sweet after repeated mouthfuls.

Miran’s original cheese kunefe in particular is sensational – the savoury, stringy cheese combines with the sweet, crunchy pastry fragments to create a beautiful mix of both flavours and textures. Finishing a whole plate is a remarkably easy task, and Bajram claims that customers from Jordan have told him it’s even better than the kanafeh back home.

Innovation is also on display in the cafe’s selection of hot drinks. In addition to the typical range of macchiatos and espressos, a traditional Turkish coffee is available, as well as a ‘Miran special’, which is flavoured with pistachio and absolutely delicious.

There are also a range of traditional Turkish teas on offer, from its most classic form through to modern, flavoured iterations, which include pomegranate, kiwi and mulberry.

The fruit cajs are perhaps an innovation too far, as the additional flavourings add little and taste very artificial, while the original, served from a pair of beautifully elaborate kettles, is proof that sometimes tradition does not need to be tampered with.

The ornate kettles also provide part of the cafe’s decor alongside a number of mosaic lamps, all contributing to the feeling that Miran is a slice of hospitality from somewhere typically a bit further east than Prishtina.

Bajram plans to extend the menu in the future, and it can only be hoped that he and his staff are able to do so and continue to bring something novel to the table.