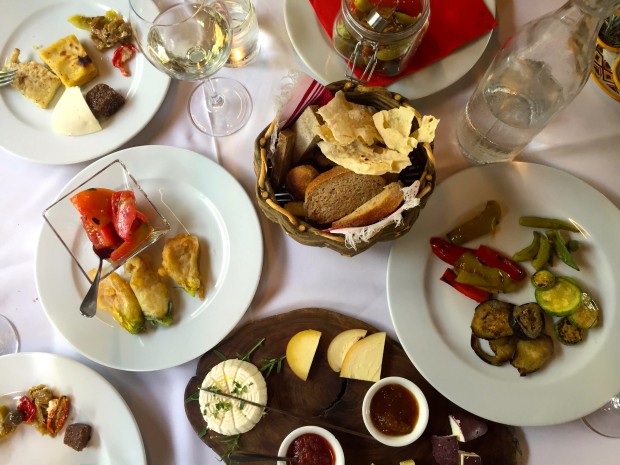 After a few hours drive and a border crossing from Kosovo’s capital, a small but well paved road spotted with cows and farmers on their bicycles leads to Mrizi i Zanave, a rural restaurant and guesthouse of international renown.

All ingredients at Mrizi i Zanave are sourced on premises or from local farms. When I visited, everyone was finely dressed, enjoying lunch while a violinist and fiddler played Albanian folk classics live. It seemed like the kind of place that Tirana’s foodie crowd comes for a weekend meal. I wouldn’t be surprised if the healthy lifestyle loving Tirana Mayor makes frequent visits.

Fishte is the hometown of acclaimed late writer Gjergj Fishta (1871 –1940). Fishta was a chairman of the commission that sanctioned the Albanian alphabet, the first Albanian candidate for the Nobel Peace Prize in Literature, and a speaker of gheg, the undervalued Albanian dialect found in Kosovo. Fishte is proud of their poet: Mrizi i Zanave hangs his portrait in the dining room and scatters plaques of his poetry around the premises. The place is named after Fishta’s 1913 book of epic poetry Mrizi i zâneve (Noonday rest of the Zanas), published during the outset of Albanian independence.

Before even sitting down for our meal, I fell in love with the place, and with the Albanian climate in general. The staircase leading up to the building is lined with olive, fig, and pomegranate trees.

Though the restaurant offers a la carte dishes, the reason most diners make the schlep is for the house special, a series of seasonal dishes served with your choice of meat.

After glasses of fruity rose water are poured, plates laden with cheeses and seasonal vegetables came to the table in quick succession. Almost too quickly, as we could barely make a dent in one before the next came. The selection of curds was beautiful: a ricotta as clean and fresh as a sip of water, a smoky gouda, and delicious typical Albanian hard cheeses often referred to as “village cheese.” The vegetables took me back home to barefoot summers at home in the American Appalachian region, except in Albania there is local olive oil served with everything. Pickled okra bobbed in the bright, unfiltered oil—the olive green color so rarely found in commercial bottles—and squash blossoms were delicately fried and stuffed with soft cheese and herbs.

I cannot forget the basket of freshly baked breads, including an outstanding cornbread loaf stuffed with greens.

Our main course was standard Albanian restaurant fare, and was cooked very well: a large platter of undressed meat (we chose grilled lamb and baby goat) was served simply with a pat of garlicky whipped heavy cream.

Dessert was a little theatrical. First, a rosewater ice orb was cracked with a spoon to get to the simple berry sorbet drizzled with honey inside. Next, hot chocolate liquor was poured over a hollow chocolate ball to reveal a scoop of blueberry ice cream. These were accompanied by a plate of tiny local fruits and a baby pomegranate shell filled with fruit liquor.

I obviously had to take that poetry walk around the premises after my meal. It was almost—almost—too much.

Luckily we had rented a room in their guesthouse. A clean and spacious room with a king-sized and a bunk bed was 50 euros, which included breakfast the next morning. The room’s balcony has a gorgeous view of the farmlands, and a bottle of wine from the next town over, Kallmet, paired well with the sunset.

Our meal for three came to 45 euros, a steal for the quality and passion that goes into the cooking. Reservations are suggested.