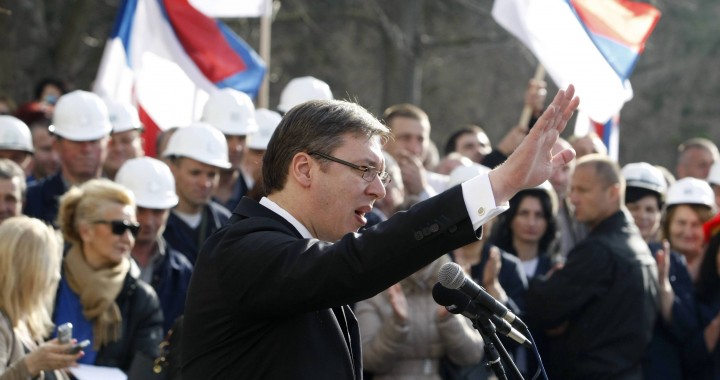 A hand grenade was set off at a sports hall in the northern municipality of Zubin Potok before the prime minister was set to speak at a pre-election rally. He said the attack was perpetrated by Serbs.

“My response to those of our Serbs who wanted to welcome me in such a way is: may God forgive you, I will fight for you and your families to enable you to live in your ancestral homes and be happy and more satisfied than you are today,” said Vucic.

Vucic also visited the Trepca mine. He said that in the on-going Brussels-mediated dialogue he will insist that the Kosovo authorities do not ratify a law to turn Trepca into a social enterprise.

“Trepca is the backbone of the existence of Serbian people in North Kosovo,” he said, pledging to continue to regard it as Serbia’s property.

“We will invest in Trepca, in new diggings that we need…we’ll treat Trepca as all other economic subjects in central Serbia.”

During his visit in North Mitrovica, Vucic also inaugurated the Oncology Department in north Mitrovica’s hospital.

“Today we participated in the inauguration of the new Oncology Department. Here we have a new scanner which [Serbian Health] Minister Loncar has said is better than the one in “Sveti Sava” hospital in Belgrade,” said the Serbian PM in North Mitrovica.

Moving on to Banjska Monastery, Vucic said that he will consider it a failure if he does not win at least 50% of the votes of Kosovo Serbs in the next Serbian elections.

During this visit he also announced the decision to build an accumulator factory in Zvecan, which would hire 200-220 employees.

Vucic also expects that the Association of Serb-majority Municipalities will be created by the Kosovo Government.

“We always respect a given word, and let alone a signature,” emphasized Vucic.

After Vucic’s visit and his speeches, Kosovo’s Minister for Dialogue Edita Tahiri told PI that Vucic’s declarations were a “political campaign.”

Tahiri denied Vucic’s statement that Trepca will be discussed in Brussels saying that this “red line” has been made clear to the Serbian PM every time he had asked to discuss Trepca.