An increasing number of health professionals from Kosovo are finding jobs in Germany, leaving behind an aging sector that lacks specialists.

Instead, he had to begin working as a medical doctor at the Family Health Center in Fushe Kosove, despite the fact that he was one of the best students in his class.

Haziri graduated with a GPA of 9.9 out of 10 at the University of Prishtina and was amongst the students chosen to attend a study visit to Dartmouth College in the United States.

Haziri had not thought of leaving Kosovo before he found out that that his studies could not be continued. But the injustice he felt forced him to change his plans. Bitterly, he claimed that the list of the people accepted for specialization contained many people with political ties or connections to the management of healthcare institutions. Meanwhile, although he fulfilled the criteria, he was rejected.

Drita Zogaj, the director of the evaluation commission disagrees, claiming that these are rumors and that the selection process is very competitive. “For example, 57 people applied for 2 spots,” she said.

A few weeks ago Transparency International published its annual Corruption Perception Index for 2016, listing Kosovo as 95th in the world, an incremental increase in points from its 2015 position as 103rd. The ranking on the index shows that corruption remains a big challenge for the country. 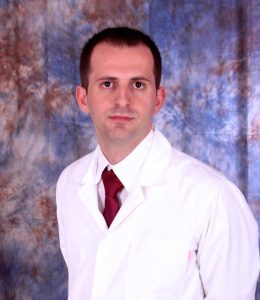 Now, Haziri is studying German, hoping that he will eventually move to and work in Germany. He is already attending an upper-intermediate language class.

“If I am lucky and able to, I will go, although that was definitely not my original plan. I always wanted to contribute to my country,” Haziri said.

Liridon Haziri is not the only one in his family who has his mind set on Germany. His brother Drilon, one of the top students of his class, is currently completing his specialization in internal medicine in Germany already.

Liridon believes that Germany’s attractiveness works twofold: one learns new medical developments, and salaries are better than those in Kosovo.

“While in Kosovo you could at best be paid 500-600 euros a month and you virtually cannot learn new medical techniques, in Germany the initial salary is 2,000 euros,” Haziri said, hopeful that he will soon join his brother.  Meanwhile, the salaries for doctors at the University Clinical Center in Prishtina, the country’s biggest hospital, add up to merely 632 euros for doctors, and 403 euros for nurses.

The general interest to learn German has increased visibly, language schools claim. In addition to people who are applying for family reunification with partners who are already German citizens, a large number of medical students and health personnel are also enrolling in classes.

“There is large interest among medical staff to attend German language courses. This year there are more nurses and fewer doctors who want to learn German,” the staff of ZAS Trade, a language school offering German classes, told Prishtina Insight. The school offers intensive courses in which participants attend classes five times a week. They said that the interest of medical staff to learn German is high, but nurses top the list.

Nasire Balla Rizaj from Britannica, another foreign language school, also confirmed that many doctors and nurses have registered for German classes at their school.

Blerim Syla, leader of the Kosovo Federation of Health Care Unions, said that the trend of medical staff leaving is on the rise. According to him, in 2013 alone, 400 medical staff left the country.

“This trend has continued to grow,” Syla said.

The increasing desire to leave Kosovo is, according to him, also caused by an ever-growing demand for medical staff in developed countries, where working conditions are much better than in Kosovo.

“Germany alone is seeking between 100,000 and 120,000 medical staff, thus there is a large demand. The demand has also risen in other countries of Europe as well as Canada,” Syla said.

The most bitter thing is that many students who participated in the survey that we conducted stated that they are getting a medical or nursing degree only to migrate, to leave Kosovo.

He said that his union has been vocal about this phenomenon, but according to him nothing has been done to protect the health care staff in the country.

Syla said that he conducted a survey with medical students, inquiring about migration. The survey concluded that most students aimed to leave Kosovo.

“The most bitter thing is that many students who participated in the survey that we conducted stated that they are getting a medical or nursing degree only to migrate, to leave Kosovo. This is how 72 per cent of the respondents replied,”  Syla said. The quoted report, however, was not made available to PI, as Syla said it was conducted “for internal purposes.”

Syla expects that, in the long run, Kosovo will suffer from a lack of medical workers.

“When we also consider that that our medical staff is growing older, it is easy to conclude what will happen,” he said ominously.

On the other hand, the University Hospital and Clinic Service of Kosovo, ShSKUK, believes that the situation is not alarming. In an email, the office of the general director of the ShSKUK claimed that it was not aware of increased interests of specialist doctors to leave the country.

“The demand for employment at the ShSKUK, especially at the QKUK, is very large in some departments. We are expecting at least 150 new specialists to be employed this year,” they responded.

ShSKUK admits that there is a lack of new specialist staff in the labor market in areas such as cardiovascular surgery, hematology, neurosurgery, and nephrology. There are too few specialists, but the office of the General Director of the Service did not comment on why these fields lack the proper staff while people, such as Haziri, are rejected from specialization programs.

ShSKUK also said that healthcare institutions are much more concerned about the nursing staff, most of whom are leaving. Yet, they claimed that currently, the lack of nurses is not significant because the market is full of nursing professionals.

“The ShSKUK does not notice a lack of staff due to people leaving, but this phenomenon is more pronounced in general practitioners,” the statement said.

The migration of doctors from their home countries towards the West over the last few years has been documented in every former-socialist country from southeastern Europe and the Balkans, maintains the Ministry of Health.

“If you go and read about this phenomenon you will notice that many doctors from Poland, Romania, Moldova, Bulgaria, Slovenia, Croatia, Bosnia, and also Serbia, Macedonia, Albania, and Kosovo have left for the West. Even doctors from Germany migrated to Scandinavia for better payment,” said a statement from the Office of Information of Minister Imet Rrahmani.

This phenomenon has also affected Kosovo, but according to Rrahmani’s office, much less so than other countries.

The ministry said that there is no accurate number for the people who have left Kosovo, except for the results of an investigation from 2013. According to these results, the number of medical personnel that left Kosovo for Germany between 2009 and 2013 (in five years) was 109.

As a response to the wave of doctors going abroad, the Ministry said that it is attempting to take measures to prevent staff from leaving.

“Kosovo Institutions have reacted by employing almost every unemployed specialist, around 250… and have ensured financial support for those who are in the process of specialization (around 500),” the response stated.

Nevertheless, throughout 2016, numerous medical specialists protested against hiring practices and access to specialization programs run by the Ministry of Health, with the most recent protest held in January this year.

Liridon Haziri protested a few times too, mostly due to the injustice he claims was done when he was not accepted to continue specialization in a field which in fact lacks specialists.

Last summer we witnessed the medical specialists protest, who instead of working in hospitals are employed as shopkeepers or waiters.

Rrahmani’s ministry is aware that it will be impossible for them to stop doctors from leaving Kosovo, considering the good working conditions offered by Western countries such as Germany.

They also expect that once visa requirements are lifted, more doctors will be able to find jobs in Germany in person and then apply for working permits.

Belul Beqaj, a social and political affairs analyst, said that Kosovo does not have the necessary policies to counter this phenomenon.

“We have come to this situation by following policies that are in disagreement with the market. Last summer we witnessed the medical specialists protest, who instead of working in hospitals are employed as shopkeepers or waiters,” Beqaj said.

According to him, it is normal that survival is a priority, but such policies are hurting Kosovo. The average age of Kosovo doctors is currently 55. With so many young doctors leaving, a lack of health professionals might become a problem in the near future.

“The biggest loss is when the youth, for whom families and society have invested in the most, leave the country,” he said.

Corrections Feb 8, 2017: a previous version of this article misspelled the German word for goodbye.

Wall in North Mitrovica torn down