Thousands of Romanians have rebelled against corrupted politicians and ‘the bribe mentality,’ with many placing hopes in the country’s chief corruption prosecutor.

The word citizen has meaning once again in Romania. For some days now, citizens have flooded the streets, meeting in squares and boulevards, in front of the government headquarters in Bucharest, and in front of prefectures in provinces. These are citizens who don’t want to be silently angry with the Romanian tragedy; they don’t want to clench their fists in their pockets. Their country’s tragedy can be summed up in a few words: corruption, lies, abuse of power, theft, deceit.

During the weekend half a million people protested, releasing the anger from their souls and singing the Romanian hymn: “Wake up from your death slumber, Romania.”

The protests are continuing into this week as well. Many people’s hope in this fight for a clean country and a functional administration is being placed in Laura Codruta Kovesi, the Chief Prosecutor of Romania’s National Anticorruption Directorate, DNA. At the protest marches, angry citizens cheered her name.

A country – a member of the European Union for ten years now – has woken up, because the government, who calls itself social democratic, attempted to legalize bribes and corruption with a shameless decree. According to the bill, any person who would loot the state treasury beyond 200 thousand Romanian Leu would be able to get away with it. In euros, this amount is about 45 thousand – almost a 100 times more than the average monthly pay in Romania. But that wasn’t the end of it: the decree also foresaw a six-month statute of limitations for criminal acts; the abuse of power would be sentenced with, at most, three years in prison (whereas it has previously been seven years);  and since the prisons, according to the government, are full, they have to pardon around three thousand criminals. Most of these criminals are state officials and politicians who became wealthy illegally. 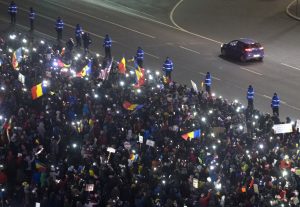 The rise against the government’s dishonesty has, for now, had an immediate effect–the government retracted the proposed bill. But for Laura Codruta Kovesi, this is no reason to feel relieved. Another law, which is expected to be ratified by the parliament, can make the fight against corruption more difficult and weaken the judiciary.

Romania’s ruling party Social Democratic Party, PSD, has become the target of the DNA, established in 2003 to go after corruption in state institutions. Kovesi has held the chief position since 2003, and she heads over 200 prosecutors throughout the country. The battle against thieves with expensive suits resembles a spectacle: the media almost always have direct access when the suspects are arrested. Between 2014 and 2016, 1,200 people have been sentenced, and currently over 2,000 cases are being investigated; 1,170 state officials, politicians and oligarchs are currently on trial. The sum of money suspected of being mishandled is estimated to be around one billion euros.

Former minister of finances Darius Valcov’s case can best explain the extent of corruption in Romania: during the raid of his property, investigators confiscated 82,000 euros, gold, and 100 paintings – among them a Renoir painting, a Cocteau, three Picassos and a Warhol. As mayor of Slatina, at the border with Serbia, Valcov filled his pockets with two million euros from local tenders. He would often negotiate his fees in the city’s graveyards, with the hope that he wouldn’t be intercepted there. 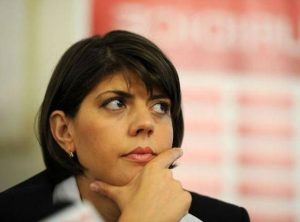 Kovesi is 43 years old, a child of the brutal transition between the communist dictatorship to a democracy led by predatory capitalists. When Nicolae Ceausescu’s regime fell 27 years ago, a clique consisting of former communists, secret service agents, and managers of state-owned enterprises managed to attain the most important resources of the country. Since then over three million Romanians have left Romania. Anyone who is able to turns their back on their home country. Doctors, IT specialists, and engineers look towards a future in Western Europe – as far away from the Romanian corruption swamp as possible.

The large number of citizens coming out to the streets is to the merit of the prosecutor Kovesi as well. She gave courage to citizens, families, and civil society to believe that no one is untouchable, that the long arm of the law will touch all politicians regardless of their positions. The balance of the last two years is impressive; one prime minister, five ministers, 21 MPs, 97 local politicians, 32 directors of state enterprises, and nearly 500 state officials have been indicted, and 93 per cent of them were sentenced.

In Romania comedians joke that Kovesi doesn’t drink coffee in the morning, but a cup of tears from the corrupt. They accuse her of leading a witch hunt against political elites, and oligarchs’ newspapers call her “a Stalinist prosecutor.” Kovesi is not impressed by any of these accusations.

“I’m just doing my job,” declares the former national basketball player when they ask her if she’s concerned about her safety. A year ago it became known that Kovesi was spied on by Mossad’s former-agents, the Israeli secret service; employees of a private security company are thought to have been hired by Romanian politicians and oligarchs to scare the highest official working against corruption. Kovesi striked back and arrested two employees of the Israeli detective company Black Cube.

Romanians aren’t ready to accept corruption like one would bad luck, said Kovesi. She will have this job at least until 2019. She’s already a heroine – not only in Romania. The European Commission regularly praises her in Romania’s reports. France has honored the ‘iron lady’ of the Romanian judiciary with the National Order of the Legion of Honor. During the ceremony Kovesi was as always very modest: “I’m very proud of the people that surround me, they are brave and active citizens. These people want to change Romania, they want to live in a country free from corruption.”

A picture of a clean Romania can be already seen in the way protesters are acting. At the end of each protest, the people themselves gather the garbage in Bucharest’s squares.

Wall in North Mitrovica torn down

by Atdhe Mulla
Next: Opinion

Social justice as a way out of ethnic trade-offs