The Kosovo fashion designer works with a traditional quilter for her new line of winter coats, capturing urban style and weaving together a collaboration between generations.

Krenare Rugova is interested in incorporating culture and history into her garments, but she does not want to dress you up in folklore.

Rugova’s new collection of winter coats encapsulates urban comfort and effortless style. Her concept is to capture the feeling of hibernating in bed on winter mornings, escaping the cold chill coming from windowpanes by cozying up under the duvet, swathed in your own body heat. 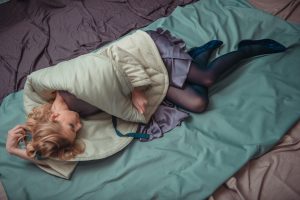 “The whole idea is to hibernate in your own skin. I’m trying to get the message across that you can be all bundled up with tons of fabric and look beautiful if you feel comfortable,” Rugova told me during a car ride from Prishtina to Prizren to visit Azem Morina, a handicrafter she is currently collaborating with.

Rugova, a Parsons graduate and a professor of concept and color methodology at AAB College, is one of the few Kosovo designers that does not focus solely on evening wear.

I don’t like my clothes to look folkloric, so I dyed the textiles black and pleated them.

Last summer, while sunbathing in the 30-degree heat of the Albanian seaside, Rugova’s mind went to duvets–handmade ones, from small shops that are all but going out of business in Kosovo. She wanted to try and turn these duvets into coats.

The tradition of quilting traditionally played an important role in Albanian marriages. The bride’s dowry would include quilted duvets, along with other linens, which were taken to the husband’s home on the wedding day. These days, shops selling hand-sewn linens and blankets are a rarity.

Morina has a small shop in Prizren’s historic center called Jorganxhi “Drita,” where he continues his family’s 50-year tradition of duvet quilting. Silky, brightly-colored duvets hang on the walls of his shop. The blankets show signs of aging from hanging on display, but with their intricate stitching, retain their beauty. 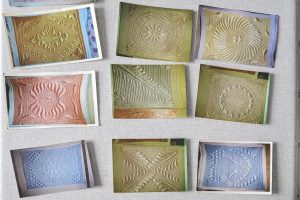 Morina prefers to protect his privacy; as he welcomed us in, he asked us to photograph only his works and his hands. He is humble, too. He immediately pulled out a stack of faded photographs of his duvets and displayed them on his work table amongst a sewing machine and plastic bags full of clementines.

“I cannot work like this anymore. When I was in shape I was able to do these,” he said about the ornamental stitching with embroidered patches of silk. He motioned to bags of wool on the floor and complained that the nature of his work is changing too, with buyers now asking for synthetic fillings rather than wool and cotton.

Rugova also prefers synthetic fillings; duvets filled with wool, she explained, cannot be washed in the machine and over time take on a musty smell. Material choice is just one aspect of negotiation between Rugova and Morina. Working together has been an adjustment for both of them.

Rugova looks to Morina for his decades-long expertise, and said that even though she is trying to do something new, does not want to just “come in and change how [handicrafters] are working.” She said it’s important for her to prove that she will not abuse his work.

The first meeting between the pair was a struggle, she explained. When she first showed Morina her ideas and fabric samples, he told her the end product would not be good–in fact, it would be “trash.” He was especially concerned that once she began cutting the duvets into coat patterns, his intricate threading would unravel.

“I had to convince him that there is a solution,” she said.

Now, with several coats already on the market and an alluring campaign video, Morina is proud of the work they’ve done together. He still however has reservations when she brings him something new.

But Rugova’s nature is patient, collaborative, and respectful. She pulled out a new fabric she brought with her to his shop, a light yellow, vinyl-like material. I also could not imagine how such a fabric could be sewn into a duvet.

Morina looked at her skeptically, saying “it cannot be done.” Still, they continued to consult with one another for several minutes, each of them touching the fabric. Eventually he began to warm up to the possibility, and started giving Rugova tips and suggestions. Several more minutes passed and they began measuring the fabric together. Eventually he took on a determined energy, ready to work. “Ne rregull. Super, okay,” he said, as Rugova wrote instructions on a notepad.

She has asked him to work with new colors, too. During the past several decades, handmade duvets have typically been constructed from sateen fabrics in bright hues. One of Rugova’s favorite coats in her collection is matte black. When Morina had finished the duvet, she explained, it was almost frightening; imagine being cloaked in a duvet the color of mourning. But they both loved it.

Other designs in the collection include a knee-length, slim fitted navy and black houndstooth coat with kimono-style elements; a cropped cerulean blue; a long, sand-colored sateen puffer; and a few in a subtly-patterned, Crayola spring green fabric. A glossy fuchsia puffer mirrors the look of the duvets hanging on Morina’s walls. 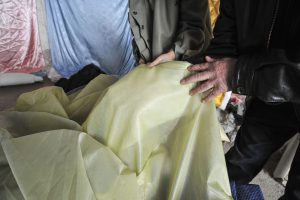 The color choices are part of Rugova’s overall aesthetic of employing traditional elements but flipping them on their head.

Her spring/summer ‘16 collection, which was featured on Purple Diary, was made from hand loom woven textiles that had been wrapped in plastic and buried underground, along with national costumes, during the Kosovo War. She cleaned and dyed the fabrics and created a collection of peekaboo dresses featuring lots of pleats and mesh.

“The loom textile collection was well-received locally, people appreciated the transformation,” she said. “I don’t like my clothes to look folkloric, so I dyed the textiles black and pleated them. It would be disrespectful towards the craft to try and reproduce it, because [as a designer] you just cannot reach that. It becomes a costume. Sure, it can have a folkloric detail, but it has to be modern.”

Rugova works with regional traditions and transforms them into a modern garments, but she treads lightly, thinking about questions of appropriation and respect.

The struggle is to respect a craft while knowing that nowadays, people are not likely to buy hand-sewn duvets stuffed with un-washable wool and cotton.

“The struggle is to respect a craft while knowing that nowadays, people are not likely to buy hand-sewn duvets stuffed with un-washable wool and cotton. But I can be a messenger of a story and sell the garment,” she said. “Since the war, we’ve seen a lot of money go to NGOs to support handicrafts, but in a way that keeps the craft at a certain level.”

Marketing her works in Kosovo is still a struggle; the new collection is priced at around 200-300 euros per coat.

“When you start to manipulate textiles, it always has a cost, both financially and timewise,” Rugova said. It takes about one week for Morina to make a duvet before Rugova can begin turning it into a coat. Some of her samples go through ten rounds before the final pattern is ready.

The new outerwear collection is garnering buzz and appreciation, though. Rugova is currently entering the French market, and locally, quilters have begun calling her to share stories about their own works, excited that a young designer is honoring the craft.

Between trips to Morina’s shop in Prizren, Rugova’s studio, and her atelė on Rruga Garibaldi, threaded into each piece is a little push and pull, age-old craft, innovation, and a real collaboration between generations.

New president of integrated Mitrovica court ready to get to work

by Behar Mustafa
Next: News