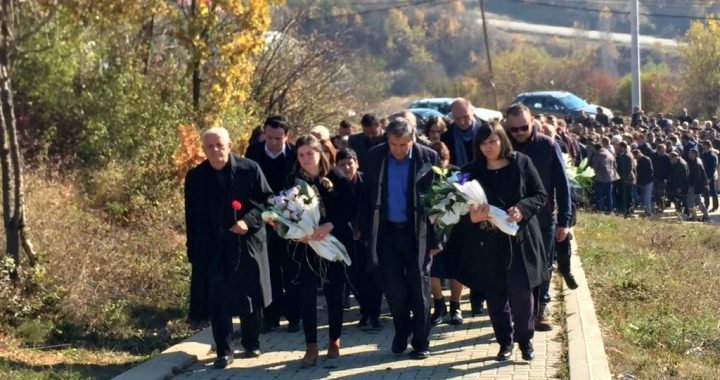 Hundreds gather at memorial one year after death of Vetevendosje activist

Citizens, politicians, and Astrit Dehari’s family gathered to mark a year since the late activist’s death in custody, demanding that authorities be held accountable.

On Sunday, hundreds gathered at the grave of Astrit Dehari, an opposition activist who died in custody in a Prizren detention center exactly one year ago on November 5.

At the memorial, Avni Dehari, Astrit Dehari’s father, thanked citizens and Vetevendosje activists for coming together.

“My family and I will always be supportive of activities that advance the national idea, and honor all those who have fallen for this idea,” he said.

A year later, the conditions of Dehari’s death remain shrouded in ambiguity and mistrust.

Dehari was in custody as one of six Vetevendosje activists suspected of attacking the parliament with an explosive in August 2016. During the three months he was held in a Prizren jail, Dehari was not interviewed by the prosecution or formally charged. Meanwhile, the case against his fellow activists is ongoing, but all the suspects were released from custody. Vetevendosje maintains that the case is politically motivated.

An autopsy report released by the Kosovo Institute of Legal Medicine stated that Dehari died of self-inflicted asphyxiation, but the family’s lawyer disputed the report. Four officials from the Prizren detention center were suspended for neglect, but citizens and the late activist’s family remain suspicious and demand a deeper probe into the death.

At the memorial to mark Dehari’s death on Sunday, Vetevendosje MP Glauk Konjufca blamed the Kosovo Police, the Minister of Justice, and former Prime Minister Isa Mustafa for the death in custody. He called for Kosovo’s previous government to take responsibility for Astrit Dehari’s death.