Families caring for children with disabilities have long felt let down by the Kosovo state, which has failed to provide either adequate specialist education or financial support.

Residents living near Aziz Nishori’s apartment block in Lipjan have witnessed an extraordinary project taking shape over the last few weeks. Outside the communal building, an elevator is being constructed which reaches up to the fifth floor, where the Nishori family live.

“I am constructing the elevator for my son Pajtim, who has been in a wheelchair since he was 14 after an accident,” Nishori explains to Prishtina Insight.

Nishori is an engineer, and is emotional now that his project is coming together. “As you can see, I will open a door on the balcony where Pajtim will enter in the elevator, and in a matter of seconds he will be on the ground,” he says. “Up until now we have carried him up and down the stairs.” 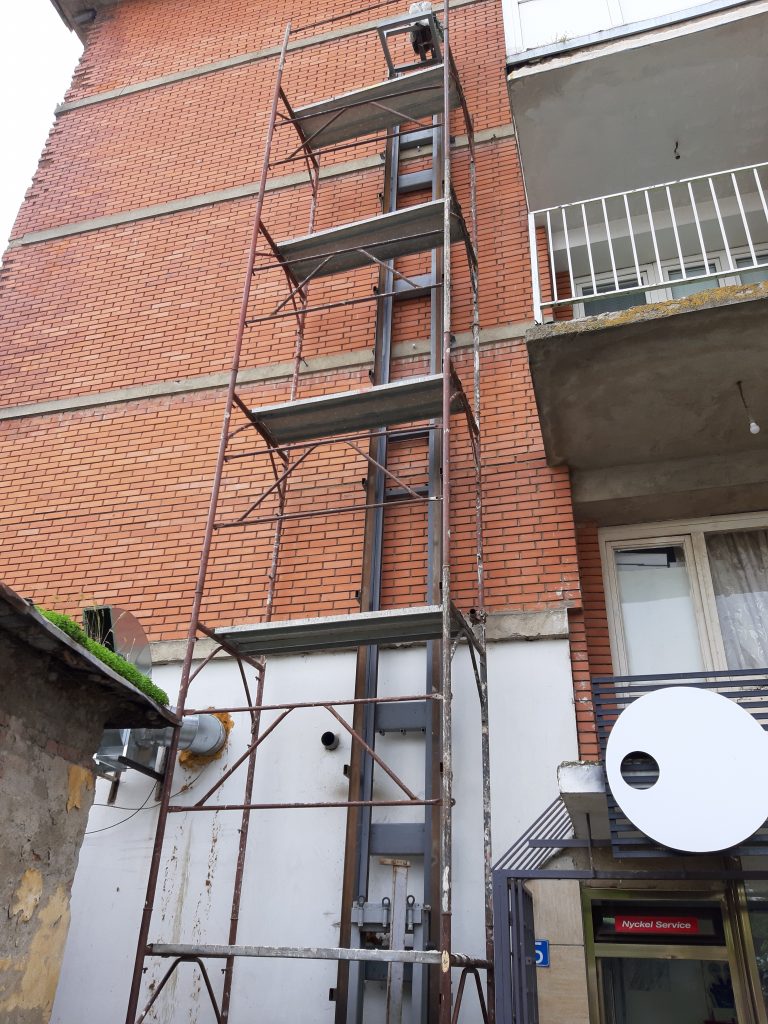 Aziz Nishori is building an elevator by hand so his son can access their home without difficulty. Photo: Agon Sinanaj.

Constructing the elevator will cost around 5,000 euros, all paid for by the family. The Municipality of Lipjan has not provided financial assistance, but did grant permission for the elevator to be constructed.

Pajtim Nishori, now a 27-year-old, lives in Italy but often comes to Kosovo to visit his family and his childhood friends. In Italy, Pajtim has a personal carer, receives medical care, and finds it easy to socialise.

“In Kosovo, this would be impossible,” says Aziz Nishori, who is also the head of OPFAKOS, the Parents’ Organisation of Children with Disabilities in Kosovo, one of the leading NGOs advocating for the rights of children with disabilities across the country.

In the modest flat where the five members of the Nishori family live, there is a small separate room for Pajtim’s younger brother, Kujtim, who has Down Syndrome. His father says that no one should bother him, adding that it has been more than a year since he left the room. “He cannot stand noise and all day he prefers to sit at his computer,” he explains.

The organisation has 8,550 members, and faces many challenges, he explains. “We all work without salaries, voluntarily,” Nishori says. “We are mainly parents of children with disabilities and it’s really difficult for us. But if we gave up, then what would happen to my children?” 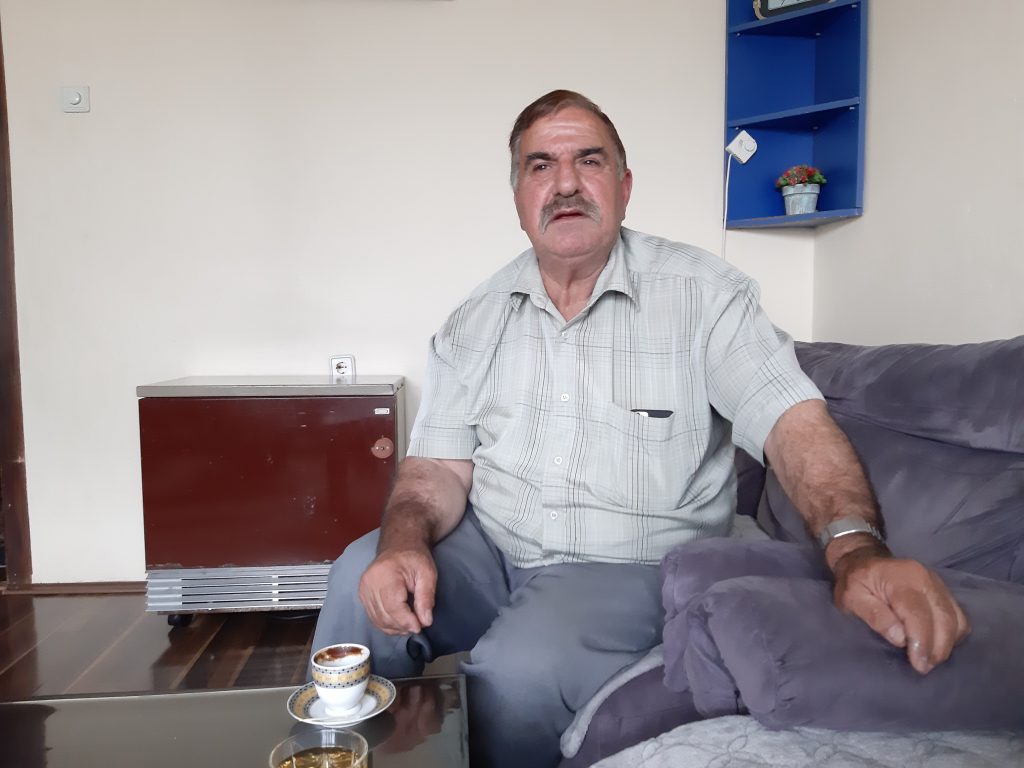 Nishori explains that a draft law that is not yet in force would expand rights for people living with disabilities, but the law has sat on the Assembly’s shelves for the last four years. “With the new law, this group would have access to a carer provided by the state, while financial assistance is foreseen to be 270 euros,” he adds.

The new law would ensure people with disabilities have the right to employment opportunities, obliging the state to organize vocational training and set up specialist schools.

Most children in Kosovo with disabilities do not have the opportunity to attend schools that cater to their needs. Kujtim, Nishori’s youngest son, finished primary school in Lipjan, but his education ended as there are no specialist schools for children with disabilities in Lipjan.

“In Prishtina there is the Perparimi school that is specialist but I could not afford the transport, or a carer,” Nishori says.

From his experience in the field in different villages around the country, Nishori tells Prishtina Insight about cases where children are completely isolated, and do not receive any assistance from the state as they are not registered as living with disabilities. 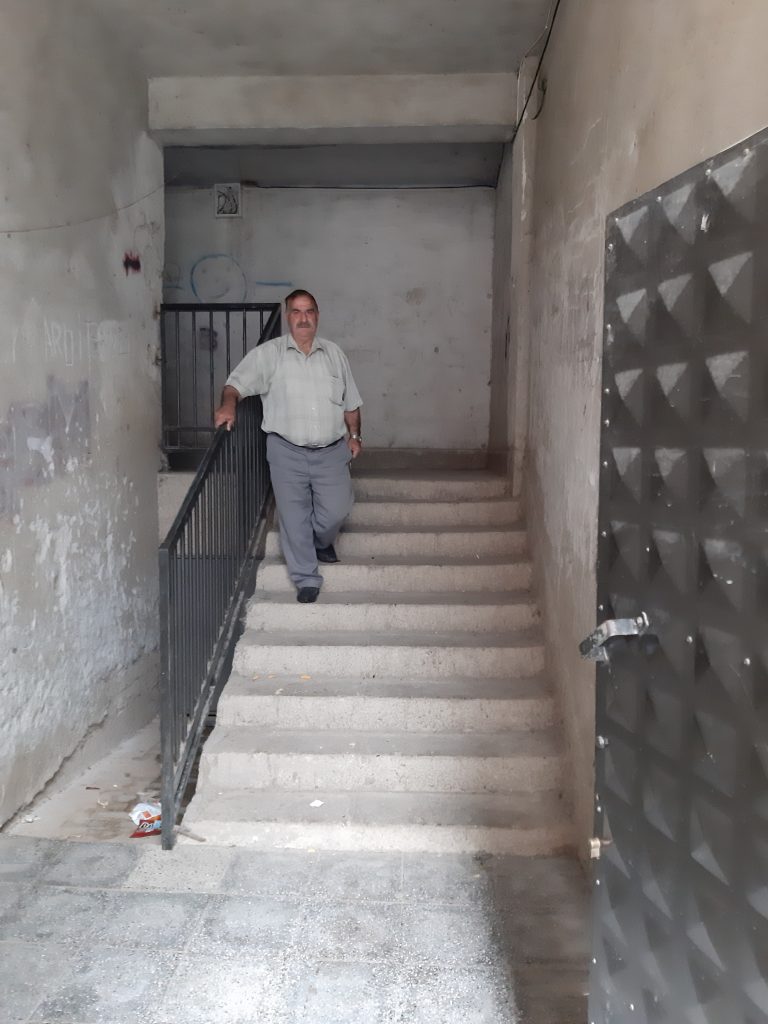 Aziz Nishori has to carry his son up five flights of stairs to access the family’s home. Photo: Agon Sinanaj.

He believes this is due to the lack of attention paid to this issue by the state, but in some cases, it is also because families hide children with disabilities because they are afraid of stigmatization from their community. Nishori says that despite advocacy efforts from OPFAKOS, the Agency of Statistics did not choose to record the number of people with disabilities when the last census was conducted in 2011.

Numbers obtained by BIRN from the Ministry of Education, Science and Technology show even fewer children with disabilities in state education. “In 2019/2020, the number of pupils with special abilities is 4,252 – 3,903 are in regular schools and 349 are in special centers,” the ministry stated.

When asked about concrete steps the ministry has undertaken to integrate children into the education system, the ministry told Prishtina Insight that 86 teachers and 70 assistants have been employed specifically to assist children with disabilities in state schools.

The lack of qualified educators is one of the biggest problems parents have when sending their children to public schools, and according to the NGOs supporting children with disabilities, the number of teachers specially trained to work with them is inadequate.

In the school in Lipjan where Kujtim attended classes, his father says, the teacher did not have any training in educating children with disabilities, and was unable to cater to Kujtim’s needs.

Many parents of children with disabilities end up looking outside the state system to private schools for education.

Cene Krasniqi is the head of the Autism Association in Prishtina, which works with around 50 children who require daily care. However, parents must pay for this care in order for the association, which employs 23 people including a therapist, to stay afloat.

Back in the municipality of Lipjan, Florie Sahiti has been sending her son Shprehgezim to a private school in Magure for eight years, but she worries that he is not making progress and that his health is deteriorating.

23-year-old Shprehgezim is from the village of Torine, where he lives with his parents, sister and brother. He has lived with disabilities since suffering a brain injury as a child.

Every time he hears the word ‘school’ Shprehgezim interrupts the chat and slowly spells out the names of his friends attending the school in Magure. “I love music,” he adds. 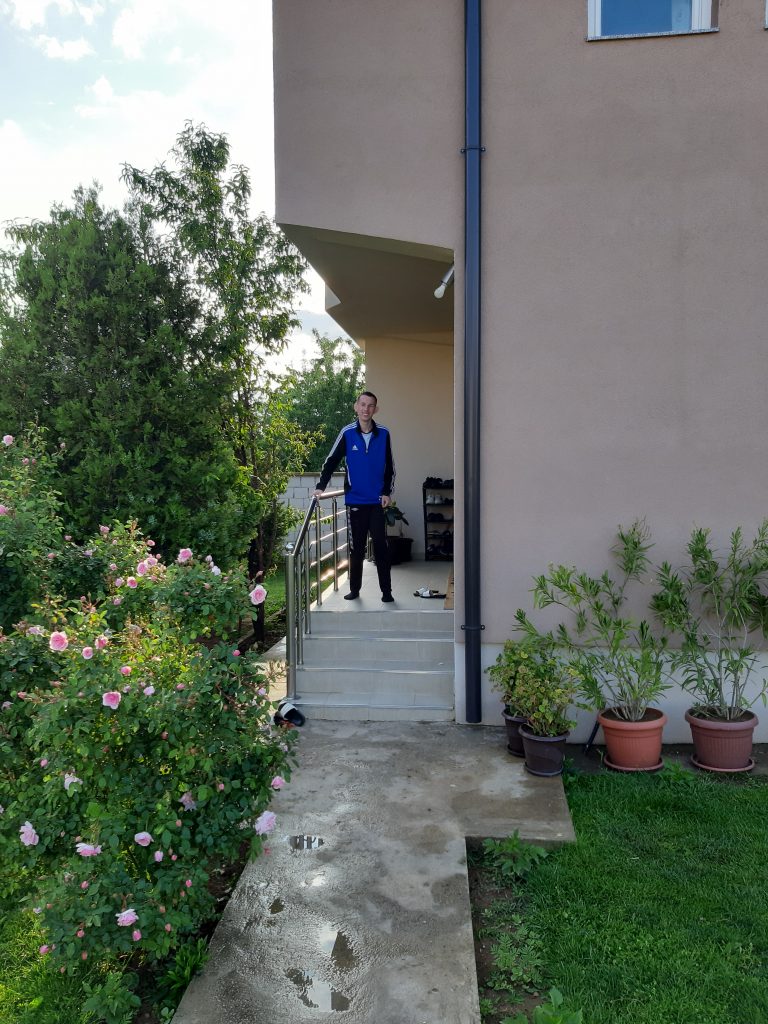 Shprehgezim Sahiti’s family are struggling with money, but are determined to ensure that he gets the care and education he needs. Photo: Agon Sinanaj.

Shprehgezim doesn’t like to go out of the house, but welcomes guests. The only social activity he has participated in outside school was the OPFAKOS olympics, a sporting activity that the organisation holds for children with disabilities from across Kosovo.

His mother explains that he was receiving a successful education through the HandiKos NGO and the Perparimi school in Prishtina, but because of financial concerns, the family had to stop sending Shprehgezim to school in the capital.

The Sahiti family receives only 75 euros in social assistance to support Shprehgezim’s care, money which barely covers the medication he requires. His father manages to secure a small income by working in the mechanised flour mill in the village, but both parents are having difficulties with money.

They are not alone. According to the Ministry of Labour and Social Welfare, there are 2,243 children with disabilities included in the state’s social scheme.

The Ministry of Labour told BIRN that for children with disabilities under the age of one, there is no social assistance foreseen. For children between the ages of one to eight the state allocates 100 euros monthly, while for families with dependents that are over 18, only 75 euros per month are allocated. 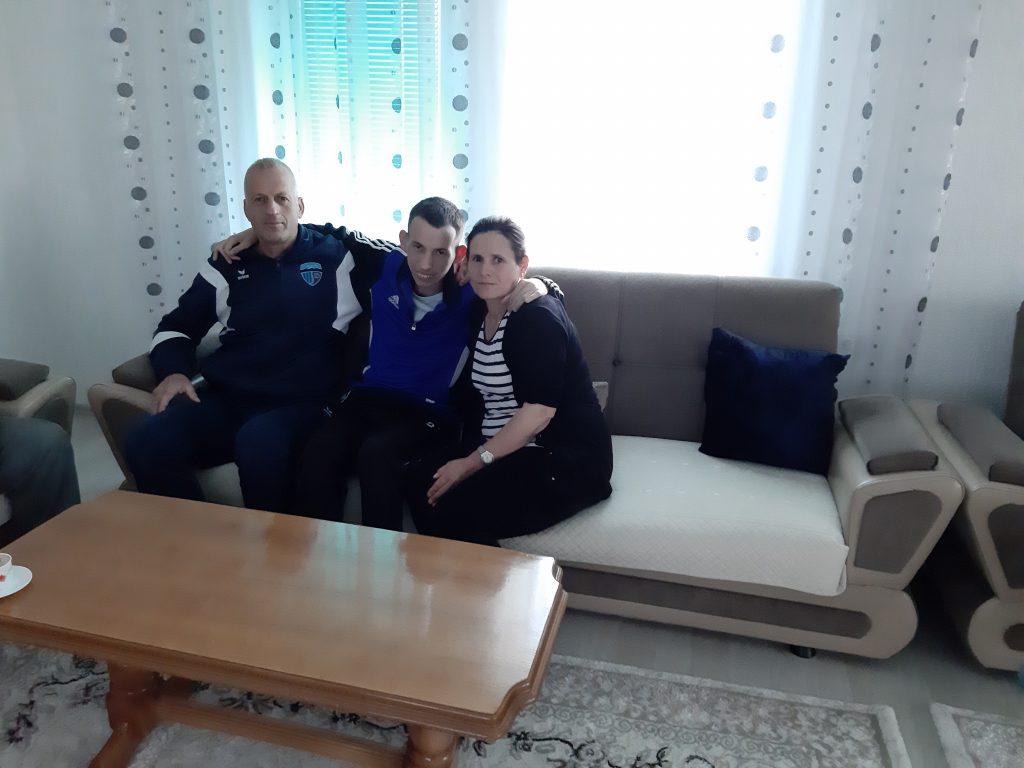 Nishori explains that there is no daily care centre for children with disabilities, despite repeated requests made to the Municipality of Lipjan.

“We have asked the municipality many times to build a centre and provide a person to care for the children but we haven’t seen any willingness to do so,” Nishori says.

As a mother of a child with disabilities, Florie feels let down by the Kosovo state. “Why should the state violate their rights and not take care of them?” she asks.

Her health is also deteriorating following surgery on her veins, adding to the family’s fears. “My biggest fear is what happens if I die,” Florie says. “What will happen with Shprehgezim? Who will take care of him?”