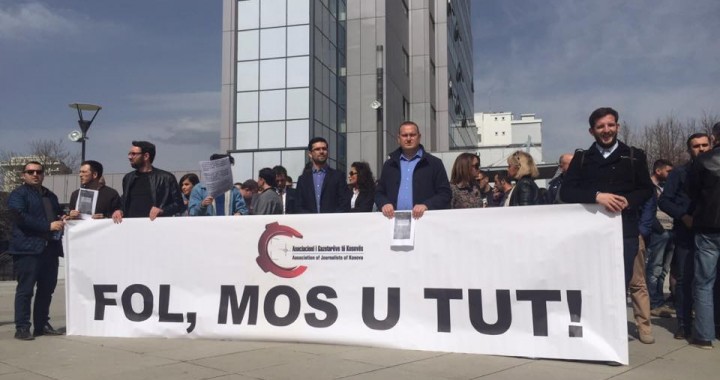 It is absolutely despicable if a prime minister threatens a citizen. It is even more disgusting if they threaten a journalist. This sort of mentality needs to be protested. Yet, we cannot forget that many journalists and civil society activists who are spouting their rage all over Facebook for free continue to turn a blind eye to even more severe cases: murders, inflicted injuries and serious threats against journalists.

There is no dilemma: a prime minister who professes to be democratic cannot, in any way, threaten or offend a journalist. According to journalist Vehbi Kajtazi, this is exactly what the head of the Kosovar government did. It is said that Isa Mustafa, the prime minister of Kosovo, very vulgarly protested against a story about his brother seeking asylum in Western Europe, where he apparently went for medical treatment. In an interview with Radio Free Europe, the PM denied that he threatened the journalist: “All that I had to say in that situation, my statements, have been published through Facebook; I have not threatened or offended anybody.” It would be appropriate for judicial bodies to scrutinize these clashing statements. If Mustafa is not telling the truth, it would be the final blow to his already damaged public credibility.

While Isa Mustafa’s brother tried to utilize the German asylum system in order to get quality healthcare, there are people in every Kosovar party who are so rich that they can afford expensive Western health insurance and leave tout de suite with a Swiss airplane if they ever get sick. Just like Arab Sheikhs, our Sheikhs are accommodated and treated in the best possible clinics in Switzerland and Germany – with our money, mind you. Even a small investigation on that would round off the debate about Isa Mustafa’s brother. He doesn’t seem to have committed a crime, unlike our political big fishes who medically treat their hearts, lungs, knees, kidneys, and livers in Western European clinics with our tax money.

Privacy is also a topic occasionally discussed in Kosovo as well: high-ranking politicians do not enjoy the same level of privacy as other ordinary citizens. Whosoever seeks the voters’ trust consequently needs to reconcile him or herself to the fact that the media and electorate are allowed to look into their private life and familial circle. It might seem unfair, but this is how it is; any Western jurist specialised in media legislation can tell you that. Nevertheless, digging into a politician’s private life also has its boundaries. If a journalist violates those boundaries, politicians can contest them by taking legal action. Often times this method is counterproductive, because the court might prove that at least half of the gossip put forth by a medium may be true.

An example par excellence of disregard and silence towards tittle-tattle about his private life is ex-President of France François Mitterrand. A great deal of unbelievable things circulated about him: sexual affairs, passionate romantic relationships, corruption scandals and a child born out of wedlock. Mitterrand was as indifferent as the Sphinx towards these claims. He knew that there was a grain of truth in them, such as his illegitimate daughter. Isa Mustafa could have followed Mitterrand’s example and ignored it. Or maybe, he could have turned it into positive news by saying: “My family and I as prime minister share our citizen’s fate.” Yet Mustafa, among many shortcomings, also possesses these two: he cannot control his quarrelsome character and does not have a PR team to professionally deal with the public opinion. That’s why he will pay the price. And let him pay it.

Has anybody, after all these years, requested justice for the attack on Koha Ditore journalist Fatime Terdevci? No. It happened in 2004. It is 2016 now. Our former colleague’s file has disappeared completely from the police and the case never even made it to prosecution. The Police didn’t even carry out a basic investigation.

Should solidarity be expressed with Xhemail Mustafa and should his murderers’ identities be uncovered at least on the anniversary of the crime? No. The same ritual happens every year: wreaths at his gravestone, useless statements by a few people from the leadership of the Democratic League of Kosovo (LDK) headship, many tears shed by his family members and a public that remains indifferent. The angered Facebook brigades are in silence. Who was Xhemail Mustafa? A journalist, a colleague of ours; a wise man, literary critic and patriot. He was killed at his doorstep after the war.

Should solidarity be expressed with Shefki Popova and should justice be served to his murderers? No. Shefki Popova was a journalist at Rilindja based in Vushtrri. He was murdered after the war.

Has any Kosovar journalist heard of Ismail Bërbatovci? According to his family, he disappeared on the 23rd of July 1998 at a Kosovo Liberation Army base in Nerodime – nothing is known of his fate to this day.

Nobody hears journalist associations, opinionists – who pretend to be interpreters of the truth – and civil society activists talk about these or other cases.

Thus, Tuesday’s defence for Vehbi Kajtazi has large nuances of hypocrisy, because other serious crimes are being kept quiet. Every threatened journalist, including Kajtazi, has to be defended by seeing the greater picture.

And this picture is smeared with many crimes that nobody is bothering to solve, and there will possibly be a murderer reading this who will laugh with pleasure. But why not? Alternatively, that murderer might anonymously create a newly-formed news portal of the Government because – this is quite indicative as well – the less time there is left for the Special Court’s processes to commence, the more news portals show up, producing dirt wrapped with patriotic labels.