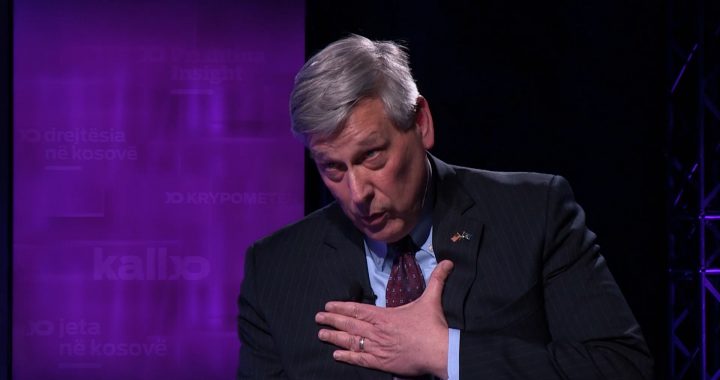 Kosnett: ‘I eat this air with a fork like everybody else’

US Ambassador to Kosovo Philip Kosnett discussed his expectations for the new Kosovo Government for BIRN’s televised program ‘Jeta ne Kosove’, outlining the US position on energy policies, Kosovo-Serbia relations and the operations of US companies in Kosovo.

In an interview for BIRN’s televised program ‘Jeta ne Kosove’ which was broadcast on Thursday night, US ambassador to Kosovo, Philip Kosnett, discussed Kosovo’s environmental issues, border adjustment and the challenges for the next Kosovo Government.

On the environment, Kosnett stated that despite US company ContourGlobal being involved in the potential construction of a new coal-fired power plant in Kosovo, “Kosova e Re” the US Government’s position was to support sustainable options.

“It is the position of the US Government that Kosovo needs affordable, sustainable energy, that also will address the public health problem that we have now,” Kosnett said. “Renewables certainly have to be an important part of that, particularly solar and wind power, which American companies have been a part of here and will continue to be a part of in the future.”

Kosnett revealed that he has personally felt the effects of Kosovo’s existing energy and environmental issues. “I live near Obiliq, I wake up every morning and eat this air with a fork like everybody else,” he said. “I think we all know that the current state of Kosovo’s energy infrastructure is unacceptable.”

However, in regard to the construction of Kosova e Re, Kosnett stated that there are a few other options on the table. “Up until now, I have not seen a plan that can produce again affordable, reliable energy,” he said. “If someone can come up with a plan that is going to work and addresses all these elements, I look forward to reading that and discussing it with all stakeholders.”

Asked to clarify the US position on the idea of a ‘border adjustment’ between Kosovo and Serbia, the American diplomat rejected the notion that the idea was officially backed by the US, but reiterated that all options should be on the table.

“The US administration view is that the governments of Kosovo and Serbia should negotiate without preconditions,” Kosnett stated. “We have said that if Kosovo and Serbia negotiate a comprehensive settlement that includes an adjustment to the borders we would not reject that out of hand.”

Kosnett, who was sworn in as the ambassador to Kosovo in November 2018, also stressed that the US did not encourage discussions on border corrections. “The US Government has never actively encouraged an adjustment of borders, or partition as some have called it,” he said. “We have also said that any agreement should be acceptable, not just to some politicians but to the people of both countries.”

The US ambassador also believes that there is little room left for such a scenario to be enacted. “Even in minority communities I see no support for the idea… Under the current circumstances speaking of partition is old news. It’s history,” he added.

Further commenting on Kosovo-Serbia relations, Kosnett also addressed the recent denial of the January 1999 Recak massacre by Serbia’s president Aleksandar Vucic, who labeled the massacre a “fabrication” earlier this month.

“The Recak massacre is a fact. There is no doubt in my mind,” Kosnett said. “There were many independent observers, journalists, William Walker [the head of the Kosovo Verification Mission OSCE during the war] who have demonstrated that it was a horrific massacre. So for anyone to deny it is a wrong thing to do. It’s historical revisionism, its unhelpful.”

Despite the discourse currently being employed by the Serbian president, Kosnett believes that both parties should be committed to peace. “If you want a peace deal, you sit down and talk to your adversaries,” he said. “You don’t make progress by just talking only to your friends.”

Road to the future

Xharra also pressed the ambassador about the lack of reaction from the US Embassy over questionable contracts involving US-Turkish consortium Bechtel Enka, who have been involved in the construction of expensive highways.

“They are expensive but there is a reason for that,” Kosnett said. “It was an extraordinary engineering feat to build the highway to Skopje. There are reasons why it’s more expensive to build a highway in the mountains than in the desert for example.”

However, Xharra responded that in Serbia, a country without any deserts, the price per kilometer was far cheaper and the highway is being constructed by the very same company. “I think you should talk to Bechtel and the Ministry,” Kosnett suggested.

Drawing on his personal experiences with the Vetevendosje leader, he expressed optimism that this can be achieved. “I’ve met many times with Mr Kurti, he fully intends to be the sort of leader that thinks about the needs of all the people of Kosovo,” Kosnett said. “I think it’s time for him to start showing that.”