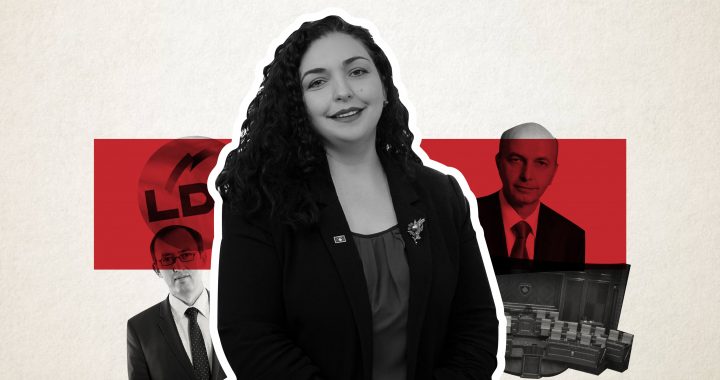 Vjosa Osmani's dismissal as deputy leader of LDK is part of a longer history of Kosovo women being muted within political parties and demonstrates the need for ‘disobedient’ women in politics, those who refuse to adjust to male dominated party structures.

Vjosa Osmani is no longer part of LDK’s leadership. With 70 votes in favour, she was dismissed from her position as deputy leader and as a member of the party chairmanship at the proposal of the party’s leader Isa Mustafa.

Mustafa had previously issued warnings that Osmani would face consequences if she continued to publicly criticise the party’s actions, and her dismissal became all but inevitable due to her ongoing disobedience.

In recent months, Osmani has refused to support the vote of no confidence against the Kurti Government, did not vote for the newly formed government led by her party colleague Avdullah Hoti, and has publicly called out LDK for not standing by its election promises.

Mustafa has described her disobedience as “unnatural” and behavior that will not be tolerated, while many of her male colleagues complained in the media about her “bad manners”, even going so far as to label her “a traitor.”

Osmani’s female colleagues, meanwhile, have been awfully quiet in response to the public attack on the party’s former prime ministerial candidate.

Following a meeting of the LDK Women’s Forum in early June, Mustafa spoke on the women’s behalf, expressing support for the new government led by Avdullah Hoti and adding that the Women’s Forum “support the decisions of the LDK bodies and demand that no one in LDK act against them.”

The dynamic between Osmani and the senior male figures in LDK is a familiar scenario and a typical example of how a patriarchal institution works. It patronizes and exploits women for their own interests and then burns them at the stake, especially when they rebel.

Osmani is not the only woman within LDK who has been publicly discredited and ‘manhandled’ by their male colleagues. Former head of the LDK branch in Germany, Donika Gervalla, was publicly and forcibly thrown out of an LDK General Council meeting by a number of senior figures in the party, all of whom were men.

Kosovo feminists familiar with the political context of the early 1990s have also noted a certain similarity between Osmani’s dismissal and the treatment of Luljeta Pula, a well-known political activist who was forced to quit LDK due to issues she had within the party.

Contrary to Pula, who has not spoken publicly about the issues that made her leave the party, Osmani has expressed her dissent openly, ever since she refused to back a coalition with PDK in 2014. Her relationship with the party seemed to have finally been restored after she was chosen as candidate for prime minister in 2019. However, things soon turned ugly following coalition negotiations with Vetevendosje, culminating in her dismissal on Saturday.

Osmani’s rebellion may have destroyed her relationship within the party structures of LDK, annoyed some of the party’s traditional admirers and even turned some of her former voters against her. However, in a survey conducted by the UNDP in April 2020, Osmani had the highest approval rating of any politician in Kosovo, with over 72 per cent of respondents satisfied with her performance as Speaker of the Assembly.

LDK’s treatment of women in its party who have ‘disobeyed’ in one way or another should not come as a surprise. In any normative patriarchal institution, women who talk back to their leaders and do not respect orders will face consequences.

Outspoken women are rare in Kosovo’s political scene. Instead, there are many women across the political spectrum who – despite coming from a background in academia, the arts and civil society, where their mouths were full of ‘gender equality’ and ‘women’s power’ – quickly became obedient subjects within their parties.

Several politicians from PDK come to mind as examples. From a once proud leader of a network of NGOs and a self-proclaimed feminist, Valdete Idrizi is now a devoted PDK activist, honouring its leader Kadri Veseli and mobilizing women to vote for him in last year’s elections. Similarly, architect and former singer Eliza Hoxha now seems in a fully committed relationship with her party. Her voice has merged with her party’s majority, and it is a voice that mainly speaks to the party militants.

Three years ago I conducted research on the stigmatization experienced by Muslim women who wear a hijab in Kosovo’s social and institutional spheres and interviewed Besa Ismaili, then vice-dean at the Faculty for Islamic Studies. She presented herself as a feminist scholar and spoke at length about the ways religious discrimination affects Muslim women.

Ismaili was well aware of the other challenges that different minority communities face in Kosovo and declared herself as pro LGBTQ+ rights. In addition, she spoke about the challenges and limitations she faces as a feminist scholar within the Institute for Islamic Studies and criticized the feminist movement in Kosovo for excluding hijabi women from its discourse.

In other words, she was a minority woman rebelling against the majority on a variety of levels, carrying a clear message on issues she seemed to feel strongly about.

However, as an MP, Ismaili has not raised her voice on these issues. Following the same pattern of behaviour as most of her colleagues in the parliament, her contribution has so far been limited to promoting her party leader and mediocre responses to her political opponents.

These MPs seem to follow the old and harmful pattern of women who adopt big, meaningful words into their vocabulary and preach loudly unless someone is talking about their father, brother, husband, or a male friend. For these women, it is no longer significant what they have to say, but what their party leader has to say.

It is a pity to see such competent women with rich professional backgrounds join the fold. It is a pity because women alone, even without the overrated power of ‘male allies’, can be a potent force in changing Kosovo’s political culture and gender dynamics in politics.

However, the narrative of “the power of women in politics” must change as quickly as possible. The success of women in politics should not end with a woman President, a prime minister, an ambassador to the USA, or any other role in decision-making unless these women address gender-based issues that impact all women, especially vulnerable women.

Violence against girls and women is as prevalent as ever, and working class women, ethnic, gender and sexual minorities are struggling for decent jobs and engagement in public and institutional life. In these circumstances, women holding senior political positions is no longer relevant unless it encourages a new culture of politics that exposes male authority and highlights the deeply rooted patriarchal barriers that women face.

A certain degree of rebellion is essential in this endeavour, especially as politics remains a male dominated world where certain individuals refuse to let go of their autocratic power and senior positions, not to mention the financial gains these bring.