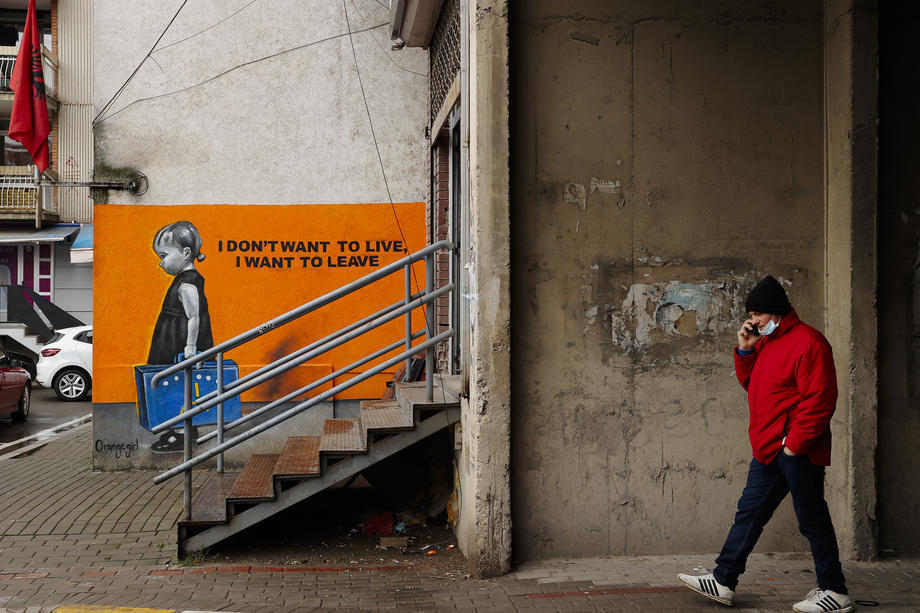 A man passes by a graffiti reading 'I don't want to live, I want to leave' in Pristina, Kosovo, 13 December 2021. Photo: EPA-EFE/VALDRIN XHEMAJ

While Kosovo’s institutions celebrated Europe Day this week, many of its citizens expressed frustration over their continued inability to travel to the rest of the continent.

The last time Aulonë Kadriu applied for a visa to go to Europe, the embassy had not managed to register her fingerprints because her fingers were  frozen from waiting in the cold outside in front of the embassy.

With this story, Kadriu wished Europe Day well on Twitter, while protesting against the long waits for visas outside embassies.

“I have a full album of passport-sized photos I took for visa appts. I have two passports – the old one did not expire, it just got full of three-day visas. On every visa appt., I pray it will be the last, but it never is. I have a visa appt. soon.,” wrote Kadriu.

Kosovars complain bitterly about the frustrating delays the bureaucracy imposes on them to obtain a travel visa.

They need them from European Union countries’ embassies in Kosovo, as well as those for the wider Schengen area, for family reunification, students, for business, for work, for student programmes, tourism and for certain urgent cases.

Citizens of Kosovo have been waiting for nine years for visa liberalization, and many people’s frustration boiled over once again when Kosovo celebrated the Day of Europe, of which Kosovo currently only feels geographically a part of.

Kosovo is now the only country in the Western Balkans whose citizens do not enjoy the right to free movement in the passport-free Schengen area.

To obtain a visa to travel outside Kosovo, citizens may have to wait for years for a meeting and meantime prepare a host of documents.

Migjen Fazliu, another citizen,  has published a photo on Twitter of the documents he needs to apply for a visa, tagging the European Commission.

“Furthermore, it has become virtually impossible to get a visa appointment in the first place, as you have to wait for a year for a free slot,” Fazliu tweeted.

Kosovo’s President, Vjosa Osmani, on Europe Day, called for an end to the unjust denial of free movement for the country’s citizens in the Schengen area.

“We call for an end to four years of the unjust unacceptable denying of visa liberalization for Kosovo” Osmani wrote on Twitter.

Visa liberalization has been promised to Kosovo since 2011. In 2018, the European Commission said Kosovo had met all the criteria and recommended EU member states to abolish the visa regime. Liberalization was also voted in the European Parliament, but the final decision remains with the EU Council of Ministers.

The rapporteur for Kosovo in the European Parliament, Viola Von Cramon, admitted that the European Union was now four years late in delivering its promise on visa liberalization.

“I hope we will see the facilitation of this process and an opening after the elections in France, it is not entirely with the European Parliament; we have confirmed that Kosovo has met the technical requirements, and we are four years late,” she said on March 4, at a conference in Mitrovica.

The Prime Minister of Kosovo, Albin Kurti on October 6 2021, at the summit of the European Union and Western Balkans countries in Slovenia, said the delay was “a great injustice … to the citizens of the state of Kosovo”, who, according to him, “have suffered a lot.”