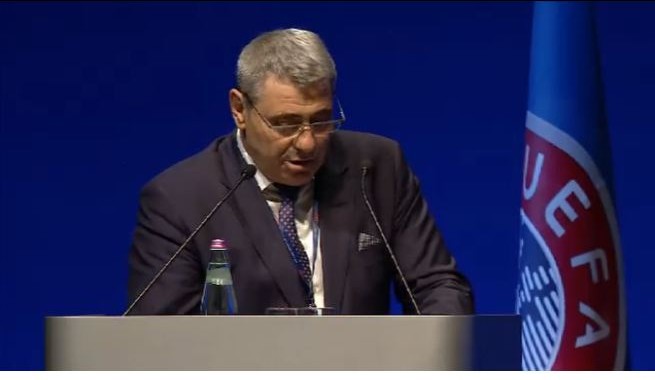 Fadil Vokrri, head of FFK in UEFA congress in Budapest.

On Tuesday, the members of the  Union of European Football Associations (UEFA) voted to admit the Football Federation of Kosovo (FFK) as a member association during a congress session in Budapest.

With 28 votes in favor, 24 against, and two invalid votes, Kosovo became the 55th member of UEFA.

Addressing the UEFA members for the first time as an equal, Fadil Vokrri, the head of the Football Federation of Kosovo said, “This is a historical moment and I promise to uphold the values of football. We want to bring people together in and out of the football field.”

The decision was received ecstatically in Kosovo. President Hashim Thaci took to Facebook to congratulate the federation and its ‘countless’ fans.

“Kosovo in UEFA! The best news for countless fans in our republic,” Thaci wrote. “Now we will play in international championships, some games will be won some will be lost but no one will ever keep us out from green fields.”

Kosovo’s Prime Minister Isa Mustafa also shared his joy at the news on his Facebook page, by declaring that he feels “very happy and proud that our state just achieved a historically pivotal success.”

The next test for Kosovo football will come on May 13 at the Fédération Internationale de Football Association (FIFA) congress in Mexico City, where there will be a possible vote on Kosovo’s recognition by the international football governing body. Kosovo cannot enter the World Cup qualifiers until it is recognized by FIFA.

Kosovo’s football team was barred from playing internationally until two years ago, when FIFA allowed the team to play in “friendly matches,” always with an asterisk next “Kosovo” on the players’ jerseys.

Admission into FIFA means that Kosovo could play in the qualifiers for the 2018 World Cup.