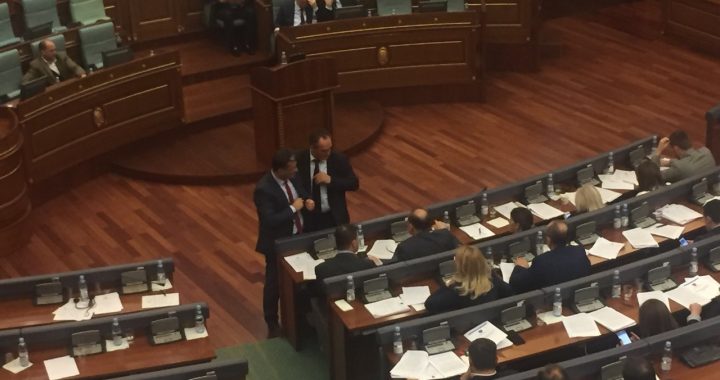 Kosovo opposition boycotts Parliament Presidency meetings, sabotaging a government-backed call to vote on the repeal of the law on Hague-based court mandated to prosecute war crimes.

Taking the international community and local public opinion by surprise, 43 Kosovo members of parliament from the governing parties signed a request to hold an extraordinary session and revoke the Law on the Specialist Chambers and Specialist Prosecutor’s Office earlier this evening.

The Assembly failed at calling the session because the Presidency, which would decide on whether the Assembly would convene, failed to reach a quorum as the Democratic League of Kosovo, LDK, Vetevendosje, and Srpska Lista boycotted the meetings.

United States and United Kingdom ambassadors in Prishtina reacted as soon as they became aware of the drastic intervention to repeal a law passed in 2015 to establish a Hague-based war crimes court that functions within the Kosovo justice system, saying that this would jeopardize Kosovo’s relations with its main allies.

Prior to the MPs’ request, US Ambassador Greg Delawie tweeted, expressing concern.

Once the request was made public, the ambassador addressed the media.

“I want to make it very clear that we the United States oppose any effort to change or repeal the law on the Special Court. I have to say I am really disappointed this thing came up out of nowhere over the last couple of days,” said Delawie, emphasizing that there was no public debate about this.

“This effort, if it succeeds, will have profoundly negative implications for Kosovo’s future as part of Europe. It will be considered by the United States as a stab in the back,” said Delawie, adding that Kosovo would be “choosing isolation instead of cooperation.”

UK Ambassador Ruairi O’Connell echoed Delawie’s concerns, saying that repealing the law would be “a betrayal” of the commitment Kosovo made to face “any accusation.”

“The UK was with Kosovo in the hardest times. We intervened, and were right to intervene, as part of NATO to protect the people of Kosovo. Nothing can erase or call into doubt this chapter in the history of Kosovo,” O’Connell said. “But it is the measure of the maturity of a state how it deals with the most difficult of accusations against its citizens. Two years ago, Kosovo gave its word that it would face any accusation, and showed to the world that it believed in justice, not impunity. Voting to repeal the law on the special court would be a betrayal of that commitment, and would call into question whether Kosovo believes in justice or impunity. It would have grave consequences for Kosovo.

Meanwhile, opposition party LDK  also expressed its dissent of the motion. MP Kujtim Shala stated that the parliamentary group was against the abolishment of the law on the court mandated to prosecute war crimes between 1998-2000, including unsolved murders of the party’s prominent activists.

“The revocation is very dangerous and puts the country in unpredictable adventures. LDK sees the preservation of reports with USA and international friends as vital. LDK invited political subjects and institutions to act accordingly to citizen interests,” said Shala. Meanwhile, Alternativa MP Ilir Deda also expressed alarm saying the motion was “playing with the future of Kosovo.”

“If Kosovo abolishes the law without any basis, we will be isolated from the international community…I want to be blunt we cannot  endanger the future of our country for the fate of a bunch of politicians,” Deda said.

The Assembly Presidency tried to meet twice to review the request of the 43 MPs to call for an extraordinary session, but failed due to the boycott of Vetevendosje, LDK, and Srpska Lista.

Enver Hasani, former head of the Constitutional Court, explained that without changing the constitution, the law on Specialist Chambers cannot be abolished. The Constitution can be changed only through the procedure it was changed to begin with, said Hasani, implying the necessity of a two thirds majority vote.

“This is not a question of changing the law but the constitutional foundation. With the change of the Constitution, a part of the judicial powers were delegated to the international community,” Hasani told BIRN.

“The abolishment of the law on Specialist Chambers has no basis if the constitutional amendments are also not revoked, and we cannot abolish an international obligation of Kosovo,” concluded Hasani.